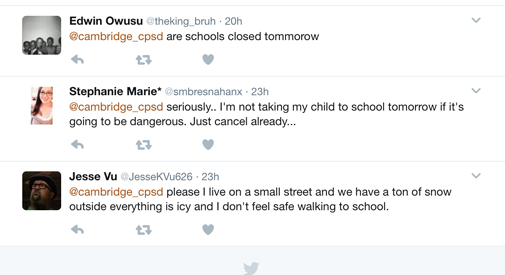 Cambridge Public Schools officials have taken a couple of good half steps toward transparency on calling snow days, but the two half steps don’t quite equal a whole step forward. It looks more like shuffling uncertainly.

Officials have expressed sympathy for parents whom they make wait to plan for having a child home from school, or not, and have given a sense of why it’s hard to make that call – without communicating the whole story that would really let parents understand. (Maybe we can help.)

And there is an attempt at being better on signaling via social media whether school will be open despite snow.

Surprisingly, though, the officials don’t seem to grasp the inadequacy of their response, despite what is now years of pleading from parents and others. Yes, Cambridge announcements can still trail that of neighboring communities – word of Tuesday’s school closings came at 3:34 p.m. Monday in Somerville and at 5:10 p.m. Monday in Cambridge – but it’s not a race.

It’s more about something touched on Tuesday in a news article touching on whether schools would be in session Wednesday.

That Twitter loop worsens the built-in ambiguity of a policy in which “We only make an announcement if schools are closed” but parents know that, historically, officials are slow to make the call. At some point during or after a storm, officials are going to stop considering a snow day based on those existing conditions, and it costs someone a whole several seconds on Twitter to say officially what decision resulted.

So what happened this time? Somerville school officials said at 5:59 p.m. Tuesday on Twitter and Facebook that classes were canceled Wednesday (drawing no small amount of ridicule from parents, along with some gratitude for thinking of student safety), while Cambridge’s final-ish 7:22 p.m. Tuesday tweet drew cries of frustration and confusion, including “irresponsible tweet”; “please follow with an actual announcement”; and “make up your damn minds.”

There’s still some steps to be taken on Cambridge’s snow day policy. Parents might not see those steps taken this winter, as spring comes and temperatures warm, but school officials can practice by announcing clearly what they are.