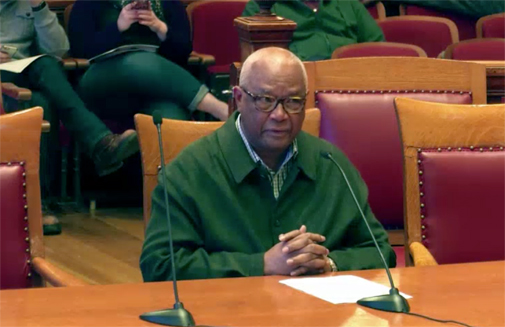 The Massasoit Elks Lodge at 55 Bishop Allen Drive filed a lawsuit in February appealing the Planning Board special permit granted to build the 195-foot Mass+Main development next to Jill Brown-Rhone Park in Central Square.

The lawsuit, filed Feb. 28 in the Massachusetts Land Court, halts development on the Mass+Main project, which the board voted to approve in January. The lawsuit was field by Donald Harding, secretary of the Elks.

The lawsuit is part of a two-pronged attack on the Mass+Main development; the other is a downzoning petition filed in January, known as the Richard Harding petition. 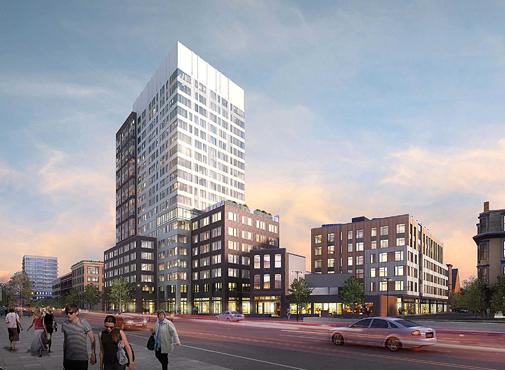 A rendering shows a potential design for the Mass+Main project in Central Square.

The City Council held its required-by-law hearing on the zoning petition on Thursday (video link), and voted to keep the matter in committee, hoping the Elks could work with the Mass+Main developers.

“Mass+Main should never have been 195 feet,” former city councillor Ken Reeves told the council, presenting the zoning petition for Richard Harding who was unavailable due to a School Committee budget hearing.

But because the zoning petition’s public hearing was not advertised until March 9 (despite being filed with the city clerk Jan. 9), the downzoning, even if passed, would not affect the special permit, which was granted Feb. 8. The Planning Board will hear the petition March 28.

The lawsuit alleges that the board “did not pay sufficient attention to the impacts” on the Elks Lodge and other properties on Bishop Allen Drive. It also alleges improper review of the stormwater aspects of the project, as well as inadequate review of the effect of changes to municipal parking lot six (between Mass+Main and the Elks) on abutters.

The case is assigned to the court’s “fast track,” and a routine status conference is scheduled for April 10.

The lawsuit’s docket number is 17 MISC 00099. The Elks are represented by Paul Haverty and Mark Bobrowski of the recently reorganized firm of Blatman, Bobrowski & Haverty. (Bobrowski represents Michael Hawley and other East Cambridge residents in the Planning Board special permit appeal of the East Cambridge courthouse redevelopment; that case was argued before the Massachusetts Appeals Court in October and awaits a decision.)

The City of Cambridge is represented by Megan Bayer, hired by the Law Department within the past month. Ms. Bayer comes to Cambridge from Boston law firm KP Law.