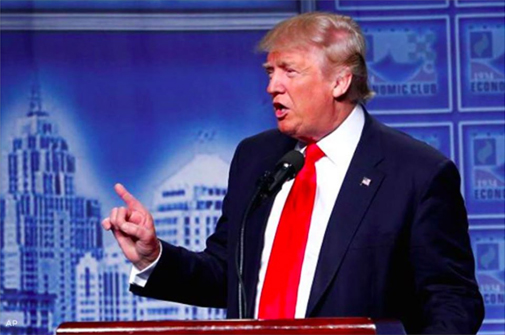 “Clearly it will affect housing and human services,” but there could also be impacts in the schools, Kale said. He cited Trump’s proposed budget for the U.S. Department of Education, which does not contain any increase for the major federal program funding special education.

“Those costs are increasing,” Kale said.

The budget cuts could be met with property tax hikes or cuts to city services, officials have said.

Most of the potential budget impacts to housing and human services stem from Trump’s proposal to eliminate the Community Development Block Grant program. This year the city expects to get $2.5 million, which Kale said pays for a variety of services, including development of affordable housing, home improvement for low- and moderate-income owners and renters, a biotech job training program, help for small businesses and a tenant-landlord mediation program.

The proposed Department of Education budget also eliminates funding for teacher hiring and training, known as Title IIA. The Cambridge schools budget for this year included $380,000 from the federal government for Title IIA. And another program slated for elimination, 21st Century Community Learning Centers, has been supporting a program for at-risk students at the Putnam Avenue Upper School.

Trump’s budget is far from being enacted, with media reports showing skepticism among even Republican officials. “Some of these cuts may stick and some may not,” Kale said. “We’ll have to see what turns out to be reality.”

Development of the city’s budget, meanwhile, is much further along; the city’s fiscal year begins July 1, while the federal fiscal year starts Oct. 1. Asked what would happen if some or all of the federal cuts materialize,  Kale said: “If we lose external funding those resources would have to be replaced with property tax funding.”

City Manager Louis A. DePasquale suggested another scenario: Officials might come back to the City Council to seek program cuts. He warned of that possibility at a Jan. 25 budget planning meeting of the council’s Finance Committee, which consists of all councillors.

DePasquale told councillors it would be difficult “to replace everything” if the federal reductions are adopted, adding that the city “cannot be a backstop” for state and federal aid, according to minutes of the meeting.

Rather than consider cutting services, some councillors tried to find a way to increase property tax revenues without burdening small businesses and low- and moderate-income property owners.

A third possibility councillors want to explore is imposing a different “tax abatement process” for condominiums, the minutes said, but the report of the meeting did not clarify the idea.

All possible changes would require state Legislature approval, which could take more time than the city has.

Asked for the current status of the proposals, vice mayor Marc McGovern said in an email: “These ideas are very, very much in their infancy stage. We will be looking at various ways to address any budget cuts coming out of Washington. We are fortunate that due to sound financial management we are in a strong position.”