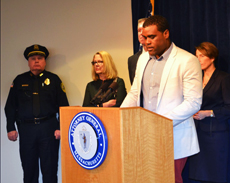 Seven men were arrested in a sting operation March 9 at a Cambridge hotel as part of a effort to fight sex trafficking – but none of the johns were from Cambridge.

The men who came to a Monsignor O’Brien Highway hotel that day after propositioning to pay an undercover detective for sex acts, law enforcement officials said Wednesday, were all from different communities: Somerville, Boston, Brookline, Dedham, Norwood, Roslindale and Canton. The men were as young as 22 and old as 71.

The same sting took down 22 other johns in Barnstable, Northampton and Springfield, according to the office of Attorney General Maura Healey.

Details of the sting weren’t available. “There are sensitivities in sharing that information to protect the techniques used to identify the suspects,” said Jeremy Warnick, director of communications and media relations for Cambridge police.

In 2013, a Michigan man and woman were charged under the state’s then-new human trafficking law with bringing two underage girls to Cambridge to work as prostitutes. The adults drove the girls cross-country, got a room at what was then the Best Western Plus Hotel Tria near Alewife and then the Marriott Hotel in Kendall Square and posted ads on the website backpage.com offering sex services for a fee. Hotel security became suspicious of their activity and called Cambridge police.

“Massachusetts law enforcement agencies know that to stop sex trafficking, we have to stop sex buyers,” said Dhakir Warren, the director of network learning and engagement at Demand Abolition, in a press release. “No buyers means no business.”

In Boston, it’s estimated that more than 20,000 ads selling people for sex are posted online every month, with each ad getting an average of 52 responses, according to research by Demand Abolition. There are more than 9,000 searches for sex-buying opportunities happening in Boston each day.

Healey said her agency would continue to work with local law enforcement to “end the victimization of vulnerable people.”

“We know that demand for commercial sex is the driving force behind sex trafficking,” said AG Healey. “We hope that this initiative raises awareness that human trafficking is not a victimless crime. It is the exploitation of human beings.”