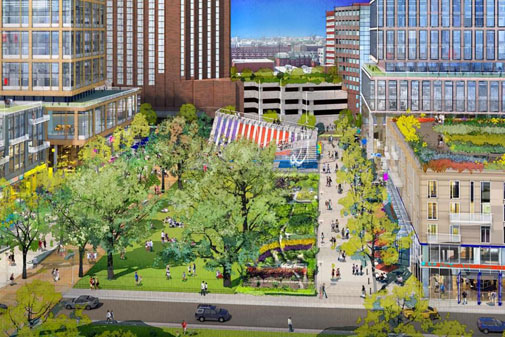 Plans for a parcel in Kendall Square could alone mean as many as 1,400 more housing units for the city. (Image: Elkus Manfredi)

Cambridge is growing and being reshaped without School Committee input, and members expressed growing unease Tuesday that the city will be poorly prepared when the time comes to add schools.

With several thousand new housing units due – 1,000 recently added in in the Alewife area, with 1,500 on the way; 3,000 units coming in NorthPoint; and up to 1,400 for the redeveloped Volpe site in Kendall Square – members noted that if even 10 percent of those units have one child, that’s easily two schools’ worth of students.

The NorthPoint area alone already has 100 students, “and by the time they are finished [with construction] there will be nearly 300, an entire school building,” Mayor E. Denise Simmons said.

The committee, although members “haven’t necessarily been invited into the conversation,” Kathleen Kelly said, “has an important contribution to make to that conversation.”

A motion by Kelly and Patty Nolan asked simply that new school buildings be considered as part of development in those neighborhoods.

It was one of 10 member motions and 25 contract recommendations dealt with at the committee’s last meeting of the school year in addition to two hours spent on Superintendent Kenneth Salim’s final Entry Plan Framework – which was not voted on because Mayor E. Denise Simmons tabled it for further discussion.

Algebra. A motion by Patty Nolan and Richard Harding asked for a review and strategy for the upper schools’ math program, including data on the pass rate of the Algebra I test for all students and a look at if and how the teaching is fully engaging all students. 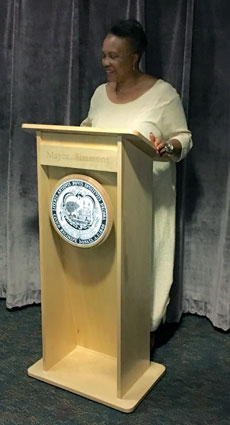 Mayor E. Denise Simmons at the Tuesday unveiling of a mayoral lectern made by the students of the Rindge School of Technical Arts. Carpentry and engineering students collaborated on the project; the city seal will be etched into the wood by laser. (Photo: Jean Cummings)

For several years, the district has pressed to have all eighth-graders successfully complete Algebra I. Failure to pass a Cambridge Rindge and Latin School placement test means repeating the class at the high school regardless of a student’s grade in the class, even though the test does not align perfectly with current eighth-grade curriculum and covers topics not presented in the middle schools. Only middle school students in the “accelerated math” track are doing the coursework, though, and of those students, the pass rate remains notoriously low – last year’s was about 15 percent.

Harding also emphasized that he wants to ensure that students are taught by teachers rather than by computer programs.

The motion passed unanimously, with Simmons noting wryly that she “was in Kathleen Kelly’s seat at the table” in 1993 when the committee voted to have all eighth-graders take algebra.

Girls’ sports. A motion by Simmons, Emily Dexter and vice chairman Fred Fantini asked for a “plan of action” by September on ensuring that girls’ sports get as much support and recognition as boys’ sports. It came in response to a letter to the committee from graduating senior girls, presented at the previous meeting. The letter, read by student representative Mari Gashaw, charged that harmful inequities are going “largely unnoticed” – including inadequate equipment and uniforms, late or no-show buses and a general lack of institutional interest in girls’ events, even when girls’ teams have stronger records than the boys’. Simmons and student member Paul Sullivan corroborated the girls’ issues and expressed strong support for action.

Harding, though, asked for more information about what prompted the motion; again late to the meeting or having stepped out of the room, he had not heard Gashaw’s reading of the letter two weeks ago. The letter had also been forwarded officially to all members, and the motion was sent to members last week. After being finally apprised, he joined others in passing the motion.

Member Manikka Bowman took the opportunity to suggest that committee members could “show leadership in changing the cultural school climate,” with she and Simmons suggesting that members could be “more present” at girls’ events. School Committee minutes are awash in references to boys’ “great games,” particularly by Fantini and Harding. Both men acknowledged Bowman’s challenge.

Teachers of color. A late motion by Kelly, Fantini and Harding, not yet provided to the public in writing, asked for a report on the status of attracting and retaining teachers of color. “It’s high time for us to begin to look at some of the problems that have been identified that we seem to be all in agreement on globally,” Harding said. “We need to get some accurate information about what’s actually going on to further the work” around teacher diversity and retention.

“I think the narrative has been set in the public domain around what’s really going on,” he continued, “but I think if you look deeper into the numbers you’ll see that the narrative in some ways is not accurate.” He went on to say that the Cambridge’s record on teachers of color – at 22 percent, it is the second-highest in the state – is a strong one. In doing so, he seemed to be suggesting that community members and staff who express dissatisfaction at the city’s record may be off-base.

Building temperatures. Fantini wanted to hear more about how the administration plans to manage “increased temperatures” in buildings that lack air conditioning. “As new schools are brought on board,” he said, “the disparity and inequity [across buildings] gets to be greater.” Bowman, chairwoman of the buildings and grounds subcommittee cited in Fantini’s motion, reminded members that her subcommittee has already been soliciting data and updates from Chief Operating Officer Jim Maloney on this and related subjects and is mapping a multiyear plan. The motion passed unanimously.

Disciplining students. Harding asked that the superintendent review discipline policies with an eye to ensuring that a student’s “possible exposure to trauma” is taken into consideration. Saying it was a “friendly” motion, explicitly without a timeline, he asked that if changes are warranted, they be reported to the committee for a vote on incorporation into current policy.

Early childhood education. They committee revisited a previously tabled Dexter motion to allow the Principal of Fletcher Maynard Academy to move 4-year-old preschoolers at the building into the school’s junior kindergarten or kindergarten program if “developmentally appropriate.” Dexter suggested that the motion be referred to the community engagement subcommittee, saying that Principal Robin Harris and Assistant Superintendent for Elementary Education Maryann MacDonald had indicated to her that they welcomed a subcommittee discussion of the issue. Her motion to refer got no second, though, and the superintendent did not speak up to support her claim that Harris desired a discussion. Fantini, noting that “we have to have some fidelity” to the work being done on the Early Childhood Task Force – a citywide group with no School Committee members on it – moved to take Dexter’s motion off of the agenda, which passed with Dexter alone voting against it.

Advisory council. Simmons, Harding and Fantini proposed the creation of a “Minority Parents Advisory Council for Minority Students” to work with district leadership. Dexter and Nolan questioned the use of the word “minority,” and wondered whether the group should best be for families of color or for families of students of color. Bowman urged that they “think creatively” about outreach and whether a physical meeting is the best vehicle for reaching a wide audience, noting that the District Planning team used city outreach workers to do home-based interviews.

“I respectively ask for it to pass as is and we will work on it,” Simmons said. That allows progress to go forward on the project – a strategic move she apparently did not think was appropriate for the superintendent’s Entry Plan Framework.

Executive secretary. A last-minute order by Fantini asked for approval of a recommendation by the governance subcommittee – which includes Fantini, Harding and Kelly – to bypass posting a job opening for the committee’s executive secretary position and simply promote the assistant secretary. Judith T. Martin will be retiring in December. Her salary is $100,000. Nolan, who has advocated for expanding the scope of the position, calendared the motion – postponing it until the July 25 meeting, saying she did not want to vote on a late order with no notice.

“I wish I had known that earlier,” Fantini sniped. “I would have done a lot of tabling.”

“All right,” Simmons warned. “We are going to be our better selves.”

The committee passed unanimously several contracts to support special education students in the next school year: $1.2 million for out-of-district tuition; four contracts of $180,000, $90,000, $60,000, and $40,000 for home-based services providing assessments; $42,000 for home-based parent and student training; $50,000 for home and hospital tutoring; $60,000 for services related to vision-impaired students; $100,000 to Cambridge Health Alliance for medical-related services; $180,000 for neuropsychological evaluations; two separate $100,000 contracts for nursing care; $120,000 to secure temporary certified occupational, physical and speech therapists if the need arises, $100,000 for other positions; and $100,000 for translation and interpretation services.

Also passed were contracts of $52,000 for an annual license agreement for Symphony Math, $27,000 for a replacement compressor for the Peabody School building, $85,000 for furnishing and installing expanded high school science lab space; and acceptance of $2,000 in miscellaneous grants, including $700 from the Shady Hill School to the high school in support of the Educators of Color conference – a donation Dexter highlighted in comments, noting that she hoped the conference would continue after the departure this summer of Dr. Kimberly Parker and Michelle Li, teachers who spearheaded the project.