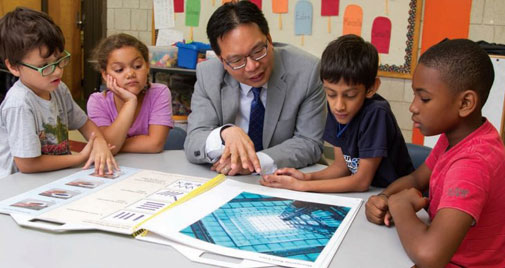 Access to committee members, help for schools are also looked at
By Jean Cummings

Federal immigration actions against Cambridge schoolchildren will be stopped at the officer of Superintendent Kenneth Salim without a warrant, officials said Tuesday. (Photo: Cambridge Public Schools)

Immigrant families were assured Tuesday by the School Committee of their “protection and safety” from inquiries and actions by U.S. Immigration and Customs Enforcement agents.

Noting Mayor E. Denise Simmons’ and City Manager Louis A. DePasquale’s affirmation of Cambridge’s sanctuary city status in January, the motion by members Manikka Bowman, Kathleen Kelly and Richard Harding would funnel federal inquiries directly to the Cambridge Public Schools superintendent, saying “no federal immigration law enforcement officer shall be permitted to enter any CPS building or premises without approval from the superintendent” … unless there are valid warrants.

Bowman, who apparently took the lead in crafting the language, said there were further edits since the motion was published.

At Simmons’ urging, the document will be referred back to school and city lawyers for a final vetting, and also to the Working Group on Sanctuary Cities, ensuring consistent language on all city documents on immigrant rights use.

It was one of several agenda items dealt with quickly as the committee winds down before the summer break, leaving time for more than three hours discussing a multiyear district plan.

An Emily Dexter motion asking the committee to explore going digital and forgo the enormous paper notebooks delivered each week was passed unanimously – ultimately. Dexter first suggested removing the motion, noting that she was already paperless but didn’t want to force anyone else, but Harding actually stopped her and said the motion should be pursued. Simmons asked that the motion include the interactive “electronic school board” that can be visible overhead during meetings, which she and member Patty Nolan had been trained on. Members agreed to collecting information on the process and potential costs, including whether the committee’s two high school students need digital devices during their terms.

A seemingly straightforward motion by Nolan and Dexter to add “information resources for parents, including contact information for the School Committee” to a summer packet sent to families was met with considerable resistance, resulting in a 15-minute worry session.

But Harding warned it could set up expectations that people could call certain individuals for help, which could be overwhelming. “You just have to be careful … we are not hiding, for sure, but if we have, say, [Chief Operating Officer] Jim Maloney publicly in a space where 20,000 people are potentially calling him, it changes the game a little,” he said. “We make the assumption that people wouldn’t take advantage of this, but I think the opposite could happen.” He worried that “astute, sophisticated” parents could overwork the list of contacts.

It led to Bowman urging that the committee examine how it could better “collaborate as a team to meet the needs of the public” within the restraints of the open meeting law limiting private discussions of three or more members, and presumably without overburdening members. “I’m going to speak from the perspective of a School Committee member with a 3-year-old child and a full-time job,” Bowman said, alluding to members such as Fantini, who has been on the committee for 32 years and, with Harding, often brings specific topics – such as buses, partner funding, project-funding or staffing decisions – to meetings.

“Everyone does not have the privilege to take a part-time job and make it a full-time job,” Bowman said.

She suggested an amendment to explicitly include “and other key staff” to the section of the motion reading: “include an information sheet on information resources for parents including contact information for the School Committee.” Her argument was that it could be “more efficient” for people to go directly to the appropriate staff, rather than have them rerouted by committee members.

Simmons worried that the motion “was taking the School Committee out of the policy role and putting us more in the administrative role,” though she did say that it had “potential” and needed to be “thought through,” but not necessarily in time for next year.

“It sounds like we should just refer this to a subcommittee,” offered Nolan, who tried to clarify that parents often don’t know whom to contact and that the intent was to provide exactly the kinds of direction members seemed to want. “Information resources,” she said, meant sending parents to the correct resources – such as the Family Resource Center, or guidance, or individual school-based resources. “But it sounds like people want a little more detail.”

After a discussion, Dexter tabled another motion allowing elementary school principals to move students deemed ready from on-site preschool programs into junior kindergarten or kindergarten. Dexter noted initially that the Tobin Montessori program allows 3-year-olds into a program that will carry them automatically through elementary school, and cited a situation in which four preschoolers were moved up to junior kindergarten at Fletcher Maynard Academy by Principal Robin Harris. There were academic and operational reasons for making the shift, and Dexter said her motion sought to provide the two principals with the latitude to make such decisions. Though the FMA students were allowed to stay in their new classroom, Harris herself called it a mistake because it was inconsistent with policy: “In hindsight, I should never have done this,” she said in December. “This is all on me, and I will never, never do it again.”

Members were sympathetic with the notion that the district’s handling of 3- and 4-year olds has problems and warrants reexamination, but resisted because of the ambiguity and pressure it may create for principals and the significant unintended consequences it could have on the “controlled choice” lottery system for school assignments. Fantini suggested waiting until the Early Childhood Task Force completes its proposal for districtwide preschool.

Kelly had the last word: “I do get concerned when we get into the issues around controlled choice and making tweaks,” she said. But, she added, “I think the intention in this motion is [something] we should be thinking about.”

The committee finally agreed to request a report from Superintendent Kenneth Salim by September about how schools with extra needs will be resourced. The budget was passed in April with no specifics on how the Haggerty and Putnam Avenue upper schools can be assured that their issues, aired at committee meetings, will be addressed. This motion by Bowman, Harding and Nolan asked for a report with a “plan of action” for these or any schools needing extra resources.

“What would determine a district intervention where resources would be put into play?” Harding asked.

Kelly, referring to explanatory information provided by Salim, urged that it be rewritten in plain English and avoid “education-ese.”

With Nolan’s acknowledgment that a due date before school starts was okayed by Salim before the meeting, the motion was passed unanimously.

Fantini wrapped up the conversation by giving everyone credit for getting this done. “I know that PAUS is heading in a positive direction,” he said, “and the Haggerty issue [of needing more help for a difficult cohort] has been resolved. This is in part due to this motion,” originally presented May 15. The fact of this motion appearing on the committee agenda, he suggested, spurred hard work. But he also commended Salim for not “just waiting” until the motion was passed. 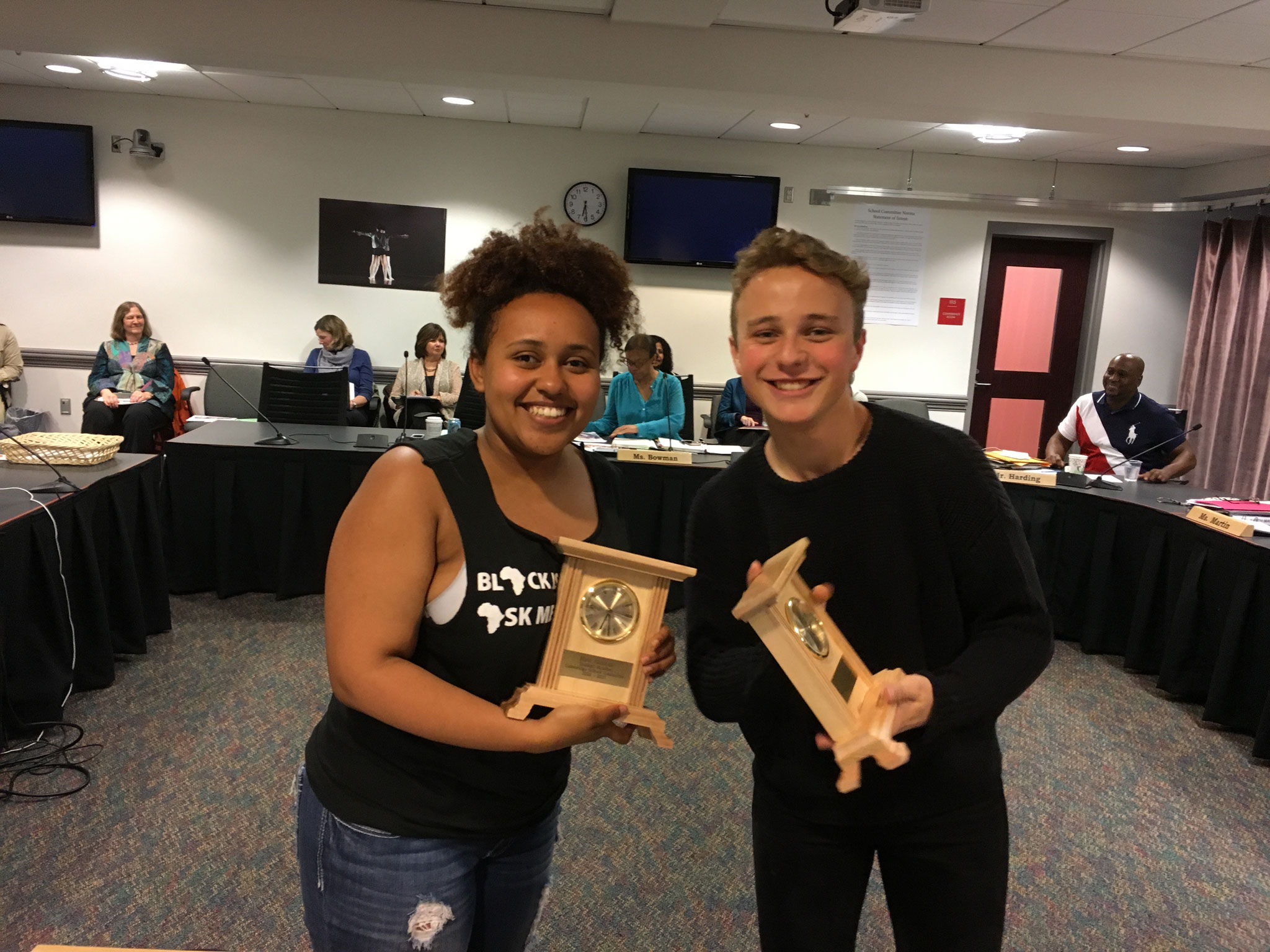 Mari Gashaw and Paul Sullivan show off clocks made by Rindge School of Technical Arts students and presented to them Tuesday by the School Committee in honor of their service as student members. Gashaw graduated Thursday. Sullivan will return as a member next year. They were praised for “always reminding us about who is not in the room,” Mayor E. Denise Simmons said. (Photo: Jean Cummings)

Although no one appeared for public comment, student member Mari Gashaw read a statement prepared by Cambridge Rindge and Latin School “senior girl athletes” addressed to Principal Damon Smith and the athletic director charging inequalities in female and male sports at the school “that go largely unnoticed.” Naming “inadequate” sports equipment, late or no-show buses, “bad quality” uniforms, and a lack of interest in encouraging or recognizing girls’ sports, the students wrote that the city could be in violation of Title IX. “Did you even know that the girls’ basketball team made it to the playoffs?” Gashaw read. These graduating senior athletes urged administrative analysis over the summer over their concerns in support of “our younger sisters.”

Passed unanimously was a Kelly and Fantini motion to explore the creation of a “special-needs stabilization fund as created through the Municipal Modernization Act” using end-of-the-year unused funds to help offset the now-regular spiking costs of special education tuitions.

Also passed unanimously with almost no comment were several contracts transferring budgeted funds to vendors for next year’s services: $10 million for out-of-district tuition for 103 students at nearly 40 different schools, $30,000 for elementary English instructional materials, $175,000 for printing and mailing services, $375,000 for districtwide instructional material, $749,000 for computer hardware and services and $86,000 for an advanced manufacturing machine for the Rindge School of Technical Arts; policy changes on wellness, staff medical leave and staff leave of absence; and acceptance of grants of $10,000 for literacy professional development for kindergarten and first-grade teachers and $20,000 for summer workshops for staff curriculum review of middle school math and early elementary English.

The committee accepted $136,000 in grants from the Office of the President of Harvard University and the Harvard Graduation School of Education to fund doctorate-program resident interns to work with the superintendent. Salim introduced them: Stephanie Downey, of New York City’s Department of Education, specializing in special education, bilingual instruction and speech pathology; Jay Jordan, a middle school principal in Washington state and before that a high school teacher and assistant principal. His two daughters are attending Cambridge Public Schools, and his wife, he said, will join the teaching staff at Morse School next year.

The committee also passed letters of appreciation or congratulations to Nancy Wyse, Nicole Sullivan and Ellen van Bever, Mildred Gedeon and Laura Morse, and Marguerite Hicks-Gyewu, family liaisons of four schools who have created and managed “school food markets”; to seventh-grader Christopher Dante Ashih for “outstanding performance and recognition by Johns Hopkins Center for Talented Youth;” to Porter Square Books for providing books to CPS students; and to the 22 high school students named as “Super Seniors.”

Notably, but without comment – possibly due to the late hour – the committee passed unanimously a letter of congratulations to Sydney Chaffee, the first Massachusetts Teacher of the Year to be selected as the National Teacher of the Year, based on a motion by Nolan and Fantini. It is notable because delegates at the Massachusetts Teacher Association’s annual state convention voted down a motion to congratulate Chaffee because she teaches at Codman Academy in Dorchester, a charter school. It’s a move that has drawn attention across the nation.