Gaps in support for girls’ sports at CRLS will be corrected, athletic director says 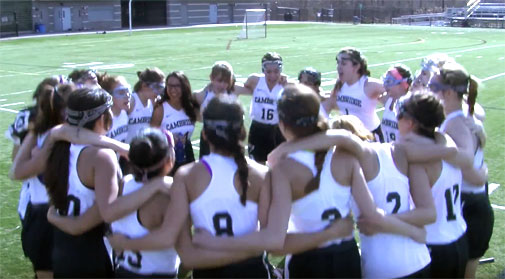 Gaps in support for girls’ sports at CRLS will be corrected, athletic director says

The Cambridge Rindge and Latin School girls varsity lacrosse team gets psyched for a game against Methuen in 2013.

The high school’s athletic director acknowledged last week a “systems breakdown” leading to unequal experiences for some male and female student athletes, but said the school was taking steps to correct the unintentional – and unknown – legal violations.

The problems were made public June 6, when student representative to the School Committee Mari Gashaw read a statement by female student athletes at Cambridge Rindge and Latin School addressing inequalities between boys’ and girls’ athletics. The statement, addressed to Principal Damon Smith and Athletic Director Tom Arria, included 22 examples contributed by female athletes.

They ranged from the girls’ tennis team being forced to buy their own uniforms and having to practice in hallways – if they were given a space at all – to the girls’ cheer team waiting an extra two years for their own uniforms to be replaced. In general, complaints ranged from lack of equipment, poor hiring of coaches, faulty bus schedules for away games and lack of interest in girls’ sports by the school itself. The main accusation was that, because of the inequalities, the school was violating Title IX, the law passed in 1972 enforcing sex and gender equality in education.

Arria stressed the importance of students coming to him with their complaints, saying he had “never heard questions [before this letter] from any students regarding inequities” but “has always paid very close attention to any sort of inequalities.”

He stressed that he “always tries to find the best coach possible” – but coaching high school sports is hard, and the pool of coaches to choose from is not always as large as he hopes. The high school has coaching vacancies for boys’ and girls’ crew, boys’ hockey and girls softball for the coming year. As far as uniforms and equipment go, Arria said, “sometimes there is a system breakdown,” but it is “never done intentionally.” With a high amount of coach turnover in the past years, “plans can at times be missed.”

Inequalities between treatment of the boys’ basketball team and every other girls’ sport was the most common theme in the letter, but Arria defended the difference.

“The boys’ basketball team is an exception in a lot of ways, because there is so much history with the program,” he said, pointing to the girls’ basketball team at his previous posting in Nashua, N.H., which was exceptional and received a ton of support, while the boys’ team got none.

He “wished all of [CRLS’] teams would receive that same support,” but mentioned many cities around Cambridge have similar deficits between sports.

The student letter drew School Committee attention, and members passed a motion Tuesday asking the school for a plan ensuring girls’ and boys’ sports get equal support and recognition.

Superintendent Dr. Kenneth Salim, responding to questions by email, said he is “incredibly proud of the quantity and quality of athletic programming for female students, along with the high numbers of student participation” but has asked Smith and Arria to review “any shortcomings real or perceived” brought up in the letter.

The work began last week as Arria and Smith sat with several girls quoted. It went well, said student Grace Toner, author of the letter, with discussion of “ways for [Arria] to communicate with student athletes directly, such as meetings with team captains, and fixing some of the things complained about in the letter” as well as “how the AD hires coaches and how he takes into account complaints from students and parents.”

The high school’s student government will help see the issue through, Toner said.