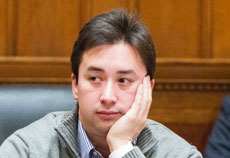 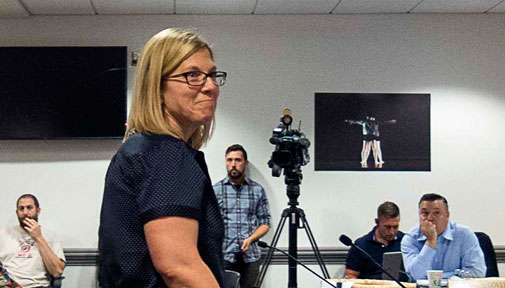 An attempt to see whether Cantabrigians want to explore public financing of municipal elections got shut down Monday by city councillor Leland Cheung, who found the proposal’s language “offensive.”

“It’s fear mongering,” Cheung said of a citizens petition for a nonbinding vote to appear on the Nov. 7 ballot. “The way it’s written, I can’t support it. So I’m going to charter right it.”

The charter right means it’s delayed by a single meeting of the City Council. But Monday’s meeting was the council’s sole meeting of the summer – helping push it past seven hours in length to a 12:45 a.m. ending – and with a next meeting not scheduled until Sept. 11, that runs afoul of a state law that requires a petition to be approved 90 days in advance of the Nov. 7 election.

The meeting ended with councillor Nadeem Mazen trying to win enough votes to hold a special meeting in the coming days at which the ballot question would be taken up again. But there was confusion over whether that would be allowed by state and city laws, and without a move to extend the meeting, the debate ran out the clock.

That almost certainly leaves the proposers of the petition, a group called Cambridge Residents for Responsible Elections, with only two options: Gathering signatures from 6,500 city voters who want the question on the Nov. 7 ballot – that’s 10 percent of registered voters – and presenting them to the Election Commission, which would then have seven days to certify all the names; or going a route that calls for fewer signatures but would have to wait for inclusion on the 2018 state election ballot.

Contacted after the meeting, group spokeswoman Anne Taylor said Cambridge Residents for Responsible Elections members were still figuring out their next move.

State Rep. Mike Connolly, who represents the 26th Middlesex District, made up of East Cambridge and East Somerville, responded Tuesday to the outcome. “As a longtime supporter of campaign finance reform, I was encouraged to see a majority of the City Council support the public financing advisory ballot question,” he said. “It is unfortunate that a single councillor invoked the charter right to block the will of the majority and the work of Cambridge Residents for Responsible Elections.”

Some 10 residents, including Taylor, spoke in favor of the ballot question during public comment, many reminding councillors that it was a nonbinding resolution that simply asked voters whether they were in favor of the council adopting a public-funding program for city elections, which cost winning candidates in 2015 between $30,000 and $86,000. When councillors picked up the topic, most responded positively – even those opposed to such proposals in the past. For instance, Craig Kelley had called a proposed “clean election” order back in February 2015 a solution in search of a problem, and a distraction from real council work; this time, referring to the “corrosive effects” of money in politics, Kelley said he’d support the question as “worthy of a discussion.”

The work of exploring publicly funded elections would have to answer a lot of questions, including who would qualify for taxpayer money, they said.

Despite some council disgruntlement over the last-minute nature of the petition process, it looked like the vote would go through. Then Cheung, who is not running for reelection in November, spoke again to employ his potentially fatal charter right.

One objection by Cheung was that the council shouldn’t have a role in deciding how elections are held, as it seemed like a conflict of interest – to which councillor Jen Devereux said she didn’t know how it would be done otherwise, considering the council’s role in determining city law. (“Somebody would have to vote on it,” she reminded him.)

But his main objection was to the question’s language, including its assertion that “Many Cantabrigians have expressed concern over what they perceive to be the undue influence of a few wealthy donors and special interest groups on municipal elections. Such concerns have the potential to erode the people’s confidence in their elected officials and reduce civic engagement.”

“I support the idea of public financing of campaigns, but like on similar efforts that have come before us, I completely object to the framing and the language that’s used. I think residents in Cambridge should have complete confidence in their elected officials,” Cheung said. “To say that people’s confidence is eroded is, I think, a misleading and false statement and one I don’t believe at all to be true.” Fear of big-money donors was applicable to national politics, but not locally where a state law limits donations to $1,000 a person per candidate, he said.

The citizens group hired a pollster to explore whether its proposal would find public support. An electronic poll of 611 registered voters by Voatz showed 74 percent of respondents were definitely or somewhat “concerned with the amount of money spent on these elections.”