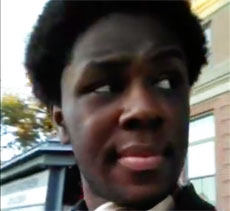 The suspect wanted in connection with two assaults in Harvard Square on Saturday has been positively identified, arrested and will be charged with two counts of armed assault to murder, police said late Tuesday.

Davongie Stone, 20, of Brookline Street in Boston, was arrested in Boston by the Boston Police Department, said Jeremy Warnick, director of communications and media relations for Cambridge police. Detectives in Boston identified him as the suspect in a stabbing in Downtown Crossing that took place shortly after the Harvard Square assaults and left a victim in critical condition.

In the Harvard Square assaults, two less serious attacks took place within 15 minutes, both described as perpetrated by a man traveling with a small group of people. In the first, the attacker approached a man from behind and cut the back of the victim’s head. Minutes later, an Arlington restaurant worker on break received a slashing wound to one side of his lower back.

Stone will be charged with one count of armed assault to murder in Boston as well as other charges, Warnick said. In desribing the Boston attack at 12:40 a.m. Sunday, police said a 21-year-old man was stabbed at Washington and Winter streets during an apparent robbery. “The cooperation of witnesses, the use of public safety cameras and a fingerprint match” was used to identify him, Suffolk County District Attorney Daniel F. Conley said in a press release.

Unlike in the Saturday night attacks, the victim had sustained multiple injuries and was rushed to Tufts Medical Center with life-threatening stab wounds to his chest, Conley said.

Witness descriptions and public safety camera footage showed two men following the victim, attacking him and grabbing around his waist while he lay on the ground. The men began to walk away when one of them – later identified as Stone – returned to assault the victim once more before fleeing on foot, Conley said, continuing:

Footage from public safety cameras in the Downtown Crossing MBTA station shows this assailant jump a turnstile, placing his hands on the metal surfaces on either side of the gate. Investigators observed a reddish-brown substance consistent with blood in this area, and criminalists were able to lift a handprint from it. That handprint was in turn submitted to a database that matched it with Stone’s fingerprints from prior arrests. Stone’s booking photo was also consistent with that of the assailant seen in the footage. The identity of the second assailant remains under investigation.

Cambridge police logs show Stone was arrested here as recently as July 28, for a warrant out of Boston District Court for threatening to commit a crime and assault and battery. After a May date in court for slapping a coworker, Stone was ordered to take anger management counseling on a charge that could have resulted in a 30-month incarceration.

In June, facing another court appearance, Stone said on Facebook that he regretted some of his actions and wanted to “have everything be peaceful now. There’s no need to be going at life with negative energy.”

This post was updated Sept. 6, 2017, with additional information about Davongie Stone, the Sunday morning attack in Boston and happening in court Wednesday.