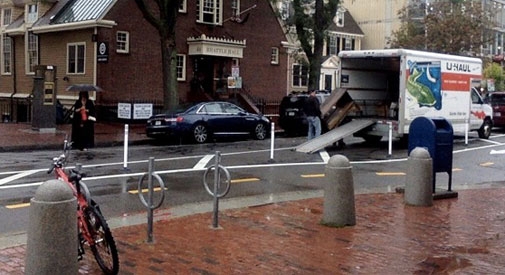 Some details are coming into focus that make it clear the advantages chef Michael Scelfo will have by taking over the space of the ousted Cafe Algiers, rather than filling already empty restaurant space in the surrounding Harvard Square.

Called The Longfellow Bar at Alden & Harlow, the space at 40 Brattle St. replacing Cafe Algiers after some 45 years in business will provide “more of a lounge-like setting, where people might choose to have a cocktail if they’re waiting for a table” at the full restaurant, said Scelfo’s attorney, James Rafferty. “And they could choose to go up afterward.”

The new lounge will have a menu “not as expansive as the full menu downstairs,” Rafferty told the License Commission on Wednesday. Some cooking will take place upstairs, with prep work done down at Alden & Harlow and staff using a service stairwell to move food between the two. The same staff will work at Alden & Harlow and The Longfellow Bar.

Replacing Cafe Algiers more than doubles the restaurant’s space, now just 1,150 square feet below ground where Casablanca once served generations of customers and 300 square feet of seasonal patio space. A License Commission agenda says that with the Cafe Algiers space there will be a total 5,009 square feet available to Scelfo and partner Brian Lesser, president and chief executive of the Speakeasy Hospitality Group. 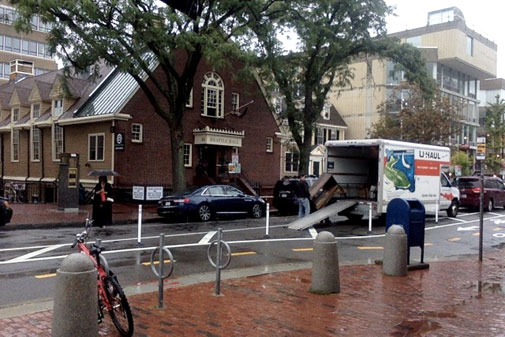 Fixtures from Cafe Algiers are moved out of 40 Brattle St. on Sept. 3. (Photo: James Williamson)

“This is an opportunity to respond to the public need that’s arisen with the success and high patronage of the Alden & Harlow restaurant,” Rafferty told commissioners, who approved Scelfo and Lesser’s request for an alteration of premises.

The partners and their publicist declined Wednesday to talk about the design of the new space or when it might undergo construction or open for business. They also declined to discuss how the space became available after the beloved Cafe Algiers was rescued from shutting down by Sami Herbawi, of Andala Coffee House in Central Square, when owner Emile Durzi fell ill.

Media reports have said it was property owner William J. Poorvu, an emeritus adjunct professor at Harvard with a focus on real estate, who declined to renew the Algiers’ lease, clearing the way for The Longfellow Bar to come in. But Poorvu has also declined to comment.