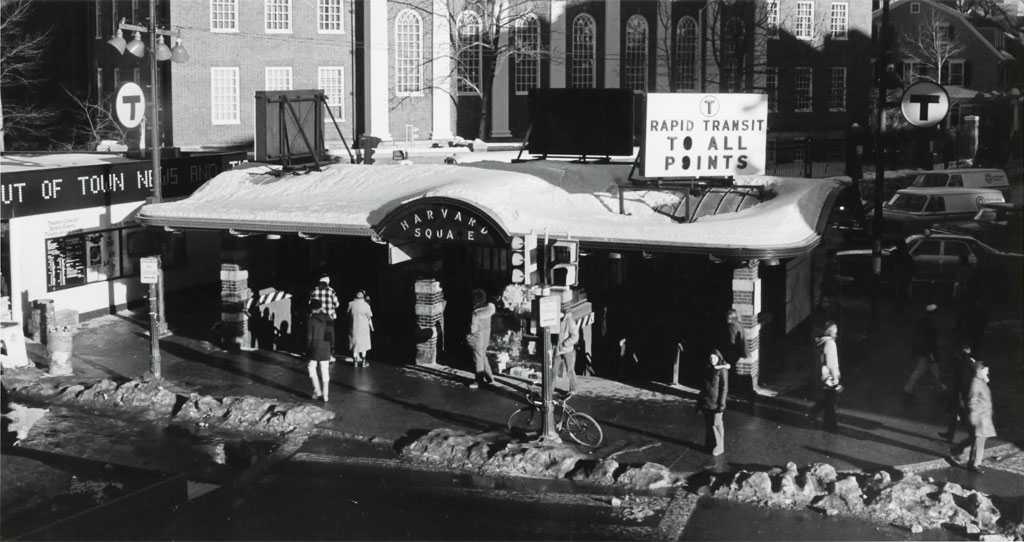 In 1977, the Harvard Square kiosk was still the headhouse for the MBTA’s red line stop. It would be relocated and house the Out of Town News – seen at left – five years later.

The iconic Harvard Square kiosk goes before the Cambridge Historical Commission tonight for consideration as an official landmark, offering additional protections for the structure when getting upgraded – and a major upgrade is due as part of a $4.6 million revamp of the entire brick plaza around the MBTA red line entrance.

The Harvard Square Neighborhood Association formed last year over worries that the alterations would erase the kiosk’s charms by steamrolling over its classic features with garish modernizations. In large part that was because the city first turned to “house doctor” firms kept under contract to get such processes started quickly, and real alarm set in with the release of an image by “house doctor” The Galante Architecture Studio, whose founding principal, Ted Galante, is from Cambridge, and on the Harvard Square Business Association board of directors. City councillors, seeing a process that seemed to be speeding along and driven by the HSBA, agreed with residents that the work needed to be slowed and opened up.

The city agreed to issue a “request for qualifications” to get architects other than Galante to bid on the project; submissions ended Sept. 21. In addition, after 1,803 people signed an online petition urging  backup for the kiosk’s other historical protections, the Historical Commission undertook a study in the run-up to the decision tonight on a landmarking recommendation for the City Council. (The commission meets at 6 p.m. at the Citywide Senior Center, 806 Massachusetts Ave., Central Square.)

Commission executive director Charlie Sullivan answered some questions and concerns in preparation for the meeting. The conversation has been edited and condensed for publication.

Some of the language in the RFQ could be interpreted different ways. Will the architects hired from it be free to design the kiosk how they want, or must they follow the Galante design to some degree?

What’s being called the Galante design is not a design at all. It’s an architectural exercise that shows what’s left of the kiosk after you take away the improvements that were done to make it a newsstand. It’s not a design and never has been a design, and it’s not a starting point for a future architect. The starting point is the landmark designation, which protects the original fabric of the kiosk and requires Historical Commission review of alteration. 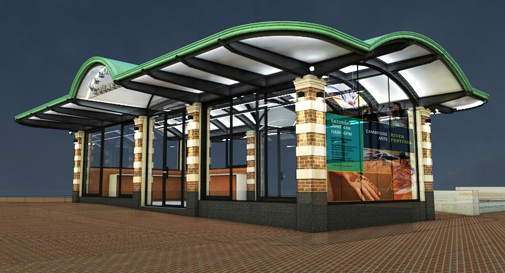 Many were dismayed by The Galante Architecture Studio’s computer-aided artist’s rendering of the Out of Town News kiosk in Harvard Square.

The RFQ says the hired architect or “kiosk design consultant” will develop a “concept plan” for the kiosk “building off schematic designs to date.” Can you clarify what that means?

If they’re calling it a schematic design, that’s a misstatement. Galante produced a whole series of renderings like the one he unofficially released a year and a half ago, the one that everybody criticizes – that particular one showed the structure of the kiosk stripped of its alterations that made it a newsstand and added back in glazing and lighting. But it wasn’t considered to be a design that could be built or would be built or was desirable. So in a sense I think the RFQ might have misstated the scheme of things. The architect that’s selected now is going to be a design architect who will work with the kiosk as it is and with the Historical Commission and the Harvard Square Kiosk and Plaza Working Group to come up with an architectural design that will preserve the significant features of the kiosk and reintroduce missing historical features where that’s possible.

One thing that might have inflamed people: The coloration on the rendering suggested that would be its lighting scheme – some people referred to it as like a UFO that would be landed in Harvard Square.

That schematic showed a lighting scheme, but it’s one of any number of possible lighting schemes. It’s never been adopted. Lighting, yikes, can take an infinite number of forms, and Galante’s point there was to highlight the structure of the original roof. But the underside of the roof has its original riveted iron beams and cypress sheathing. I think he jacked up the lighting to show the beauty of that architectural feature. But there’s a million ways to light a structure like that, and any possible lighting scheme is far away, because we don’t even know what the building would be used for.

The building is protected now as part of the Harvard Square Conservation District. It’ll be further protected if it’s designated as a landmark. So, regardless of what’s in the RFQ, the commission is going to focus on doing the historically appropriate thing for the building. And any architect who gets the job is going to understand that from the beginning.

Landmark designations always protect the structure as-is; they do not confer the authority to alter or back-date a property, and the owner is under no obligation to do so. The kiosk is complicated in that the 1927-28 structure was fundamentally altered when it was adaptively reused as a newsstand. It cannot be restored to its original appearance, because that would obviate any practical use. We’ve heard about a wide range of possible uses, and there are probably many more that no one has thought of yet. The landmark designation report has identified the highest priorities for preservation, including the roof and masonry, and established goals and guidelines by which the Commission can evaluate future proposals. It calls out the items some folks are concerned about, like the glazing and the lights, but it is simply not practical to dictate how these elements will be addressed or incorporated into some design that is at present unknown.

The kiosk and plaza are being handled by different companies. How does the city make sure the designs relate to each other in a meaningful way?

As a practical matter, the city is going to make sure the landscape architect and the kiosk architect work together. The firm that’s hired for the plaza, Halvorson Design, is a world-class firm that is highly experienced – and part of a landscape architect’s usual working condition is to work in conjunction with other professions, including engineering and architecture. One of the reason Halvorson is so successful is that they know how to do that. Ultimately, the Historical Commission is going to have to vote on changes to the kiosk and changes to the plaza. To get to that point, I – representing the commission – and the Community Development Department and Department of Public Works will be making sure all the parts are working together. When you hire an architect or landscape architect, they don’t just go off and do their own thing or get into wars with one another. They’re working for a client. And the client here is pretty experienced at making these projects come out right.