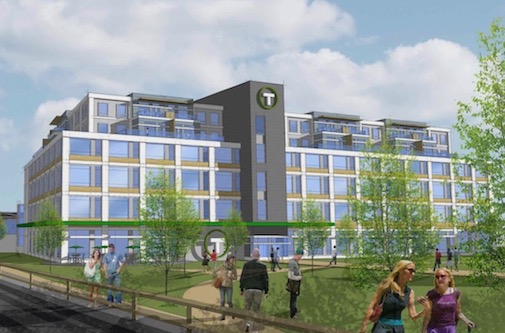 With the green line extension project funded for more than $1 billion as of Nov. 20 and back on track to bring light rail through Somerville and into Medford within four years, there’s also movement on extending rail another mile to reach Route 16.

The Mystic Valley Parkway stop was planned as part of the Massachusetts Bay Transit Authority  green line extension in 2009, then dropped as deadlines were missed and costs ballooned – risking the green line extension project entirely, until a recent revamp of plans. The new plans for extension didn’t bring back the Route 16 stop.

“A lot of stakeholders in Somerville, Medford, Arlington and beyond were very frustrated by that. They understood the realities, but haven’t given up on the dream,” said Brad Rawson, director of transportation and infrastructure for Somerville.

Now a Mystic Valley Parkway stop has been returned to the planning stages by the state’s Department of Transportation, which has extended a public comment period for the additional stop to Dec. 12; the comment period initially ran only through today.

While no funding source or timeline for project construction has been established, the mayors of Medford and Somerville and other elected officials urged the state to begin the process while the extension to College Avenue was underway, so the project will be advanced and well positioned should funding become available, a representative of the state said. The addition of time to the comment period was announced Monday.

“All the sense in the world”

Extending the green line to Route 16 “makes all the sense in the world,” more so than ending the green line at College Avenue, Rawson said. While the College Avenue stop will be of great service to Tufts University and its students – it will be mid-campus – a Mystic Valley Parkway stop would mean commuters would be able to avoid bringing cars into the clogged streets of Medford, Somerville, Cambridge and Boston.

The state’s proposal shows bicycle parking but no space for cars – but emphasizes “pick-up/drop-off activity,” and Rawson notes that there are 10,000 people living within a 10-minute walk of a proposed Mystic Valley Parkway station who are now served only by some bus routes and a West Medford commuter rail station to North Station. The current project is expected to serve 50,000 riders without reaching Route 16.

“There’s this huge demand for transit uses in that neighborhood,” Rawson said.

There is no identified funding for the Mystic Valley Parkway stop, but Rawson said the Boston Metropolitan Planning Organization of 101 cities and towns has made finding it a priority. The organization is credited by the state with putting a stop back in play, alongside Somerville and Medford, as well as with rescuing the the green line extension in the first place, alongside the cities of Cambridge and Somerville.

“The MPO was actually an unsung hero in saving the green line extension,” Rawson said.

The cities made unprecedented cash commitments: $25 million out of Cambridge – half coming from developers in the NorthPoint neighborhood that will get a relocated Lechmere green line stop – and $50 from Somerville, which is getting five of the currently seven planned stops. But the MPO facilitated a full $850 million of the total $1.3 billion in the project’s affordability limit, Rawson said.

The Notice of Project Change will initiate more state environmental review for the extension to Mystic Valley Parkway, taking into accounts impacts such as traffic, noise, vibration and the effect on the three nationally registered historic properties in the area: the Mystic Valley Parkway itself, the B&M Railroad Bridge and the Middlesex Canal Historic and Archaeological District.  “Given the significant amount of time since that prior environmental review, and in light of the many changes to the neighborhoods along the corridor since 2009, MassDOT and the MBTA believe that a new environmental review, in which the community and stakeholders have ample opportunity to participate, is warranted,” the state said.

The one-mile extension would relocate existing commuter rail tracks and put in new light rail transit tracks, reconstructing the Winthrop Street and North Street bridges in the process. Plans call for a single center-island, ground-level platform with a terminal station headhouse including  restrooms, a communication room and employee lounge. The pickup/drop-off area would be on Boston Avenue.