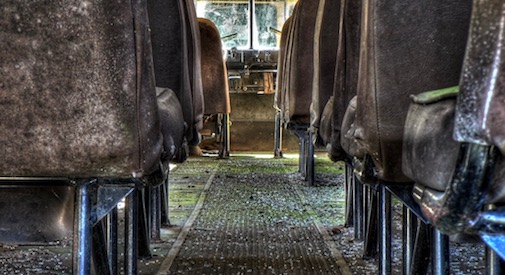 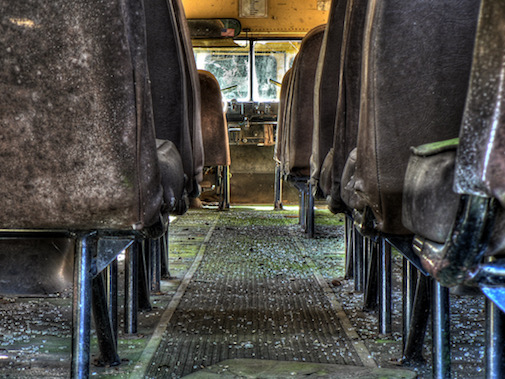 Massachusetts school districts can keep students on buses as much as two hours a day. (Photo: Alan Smythee via Flickr)

Americans with disabilities and their families have much to fear from the GOP’s tax plan in Congress. The plan nixes the individual mandate in the Affordable Care Act, triggers cuts to Medicaid, Vocational Rehabilitation Basic State Grants, Social Services Block Grants and Meals on Wheels.

Scary as this is, it pales before the quotidian frustrations of caring for a disabled child in a bureaucratic society. I can’t think of a better remedy than a paperwork reduction act to recoup gross amounts of time that parents and advocates expend merely filling out the same few forms. Or consider the quiet, largely unexamined issues surrounding the transportation of disabled children between home and school. An administrative regulation permits Massachusetts school districts to keep them riding on buses for as much as two hours a day.

Raise your hand if you think it is smart to ask my nonverbal 6-year-old with autism to commute for two hours every day while living one mile from his school.

Special education in state law defines transportation as a “related service,” following the federal Individuals with Disabilities Education Act. But the transportation services provided by school districts here and elsewhere are not typically “related” to goals in the classroom. At best, a commute endured by a disabled child is a dead zone, where no learning takes place and where behavior problems emerge. At worst, a long commute detracts from well-being. Research galore finds an inverse relationship between the duration of a commute and psychological, physical and emotional health. Boredom, isolation, frustration, fatigue, anxiety, depression, increased cardiovascular pressure and decreased concentration and cognitive performance are associated with commutes longer than 30 minutes in typical, full-grown adults.

Such avoidable ailments fall disproportionately on children, more so on children from poorer families that cannot afford private transportation – and most of all on anxiety-prone, nonverbal children with autism, like my son.

At Fletcher Maynard Academy in Cambridge, my kindergartener receives direct classroom services amounting to 220 total minutes of occupational, physical and speech and language therapy per week. The district is unwilling to guarantee that transporting him the mile to and from school should take less than 600 minutes a week. At a recent meeting on the subject, his principal stated that she did not care to “set a precedent.”

That is exactly what needs to happen.

Massachusetts does a lot to protect disabled students in transport, deploying a fleet of vans and mini-buses with trained monitors and special equipment aboard. But these vehicles, courtesy of the Cambridge vendor SP&R Transportation, zig and zag around the city. They pick up and drop off students hither and yon, rather than taking the usual, direct route based on neighborhood. Why? Because disabled children are randomly distributed. They wind up spending more time commuting than typical students as a direct result of their need for additional services. By way of comparison, my daughter reaches her elementary school in 10 minutes, the same duration GPS expects of a private car trip. My son’s best commute is more than twice the expected duration, only because he needs additional, special protection.

You can expect school principals to refuse flatly to define transportation in a student’s Individual Education Program beyond stating a need for a special vehicle. They are terrified they will need to spend more money. But meritless resistance that rises in an IEP meeting need not discourage you. Parents of children facing excessively long commutes can consider remedies at the state and federal levels. They can contact Program Quality Assurance Services at the state’s Department of Elementary and Secondary Education, for example. It’s been reorganized and might be responsive.

You can also request a hearing at the state Bureau of Special Education Appeals. That is what the parents of a teenage student with apraxia enrolled in Ipswich Public Schools did, putting on the agenda the question of “whether student’s pickup time of 6:30 a.m. interferes with her ability to receive a free, appropriate public education consistent with state and federal law.” Citing fatigue, distress and hunger due to their child’s difficulty in eating breakfast so early, so hurriedly, the parents asked for the pickup to happen 20 minutes later than the school would agree to. Already the student’s commute lasted one hour and 20 minutes each way. But the district refused, citing “excessive financial burden.” The case was heard in March 2016. The parents lost. Money won (again).

At the federal level, don’t forget that Section 504 of the Individuals with Disabilities Education Act forbids discrimination in related services. Ring up the Office of Civil Rights at the U.S. Department of Education and if anyone other than Education Secretary Betsy DeVos answers the phone, present the issue as a systemic violation. That’s better than asking school districts to care about individual students. Don’t forget, either, that the Freedom of Information Act allows public inspection of the contracts held by public school districts with special transportation companies, which are supposed to provide ongoing training to monitors and drivers in the art of protecting disabled students. Of course, filing requests for hearings and attempting to enforce statutes mean more paperwork.

Whichever way you face, never underestimate the intensity of the hidden resentment school officials can feel toward their legal obligations to accommodate disabled students. As generous or stingy as the services may be, it takes only a little probing for pressure points in an educational system to elicit the blowback vibe that families of disabled children are sort of spoiled. In our so-called meritocracy, it is easy for school officials to harbor a suspicion that you possess an unearned privilege. That feeling, more than any single policy, is what you have to fight and defeat, day after day.

John Summers, a Fairmont Street resident, can be reached through johnsummers.net.