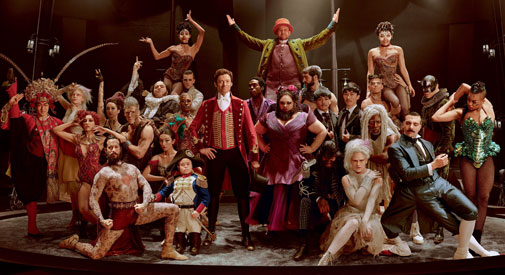 “The Greatest Showman” stars a lot of very charismatic performers performing a number of very charming songs, all centering on a heinous and exploitive historical figure who, for the purpose of spectacle, has been declawed, defanged and given the hero’s march. 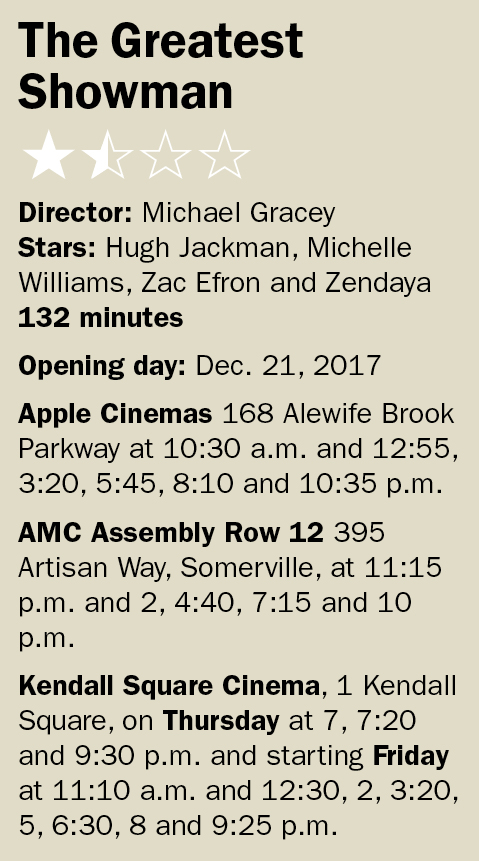 When it strays from the musical numbers that make for the film’s only highlights, “Showman” fails in even the most basic storytelling. It’s dumb, slight and loud and only in fleeting moments of wonder (those musical numbers) distracts us from what results from handing an $84 million budget to a first-time director whose main experience is in music videos. Was Baz Luhrmann (“Strictly Ballroom,” “The Great Gatsby”) really too busy? With some similarly electric moments as “Moulin Rouge!” – which is exponentially better in every way – it’s not too farfetched to imagine what he may have concocted. Or did Julie Taymor’s (“Across the Universe,” “Frida”) name never even cross the production team’s table? She might’ve been able to come up with enough visual spectacle to counteract the ludicrous screenplay that sands down the edges of our leading man and instead simply asks Hugh Jackman to dance, smile and wink his way into the hearts of the audience.

The film, directed by Michael Gracey, requests that we mute the part of our brains reminding us of the ableism that followed Barnum’s career and the fraud behind much of his success. Gracey, Jackman & Co. put on the charade that Barnum was a hero – he wasn’t – and by doing so ask us to forgive one of the film’s gravest errors of judgment: Since a heroic and empathetic Barnum is pure fiction, why not just create a fully fictional one with a different name to ringlead a circus?

The screenplay by Jenny Bicks and Bill Condon is the film’s next-greatest error, feeling tired even while whizzing by with breakneck speed. In the first 15 minutes we cover Barnum meeting future wife Charity (Michelle Williams), their destined love story even as they’re separated as children, Barnum’s poverty and their eventual engagement. We learn Barnum took a soulless desk job and was fired soon after, and that he and Charity have had two precious little girls. It’s at this clip for the entirety of the film, all exposition with no details, never resting to actually develop characters or give an inkling of why Barnum becomes interested in creating his show. Character motivation, beyond the needs of the plot, is left behind entirely. It’s a lot of dazzle with no substance.

Always the consummate performer, Jackman doesn’t quite convince us why this was his passion project, but he reminds us that he truly is a jack of all trades. He has always been a big performer, filling the space around him either with literal physicality in the “X-Men” movies or with sheer charm in some of his earlier dabbling in romantic comedies. He’s foremost an entertainer – one of the few aspects that fits in the film – and similarly, Zac Efron as Barnum’s partner and Williams do some delightful work, reminding us that they too could have shone in a musical that allowed them to act beyond the musical numbers. Efron in particular impresses, especially in “Rewrite the Stars,” a high-wire act with a trapeze artist love interest played by Zendaya (underused) that is one of the film’s most inventive pieces of choreography. “The Other Side” also makes great use of Efron and Jackman’s musical and athletic chops as they leap over barstools and onto bars, trying to outmatch and outwit one another.

And goodness gracious, this film is earnest to a fault, pushing a message of celebrating differences with a sincerity that would be welcome if deployed in a vehicle more deserving of its sweetness. Somewhere, buried beneath CGI elephants, the whitewashing of history and the image of a man literally hightailing it through the streets with his hands outstretched toward the life he misses, is some semblance of entertainment. Not enough to earn the “Greatest” moniker, but it would be a bold-face lie if I said that some of the larger song and dance numbers – an enthusiastic, eclectic mix of pop, folk and show tunes by Benj Pasek and Justin Paul of “La La Land” and “Dear Evan Hansen” fame, with most of the actors doing their own numbers – didn’t plant an embarrassing smile on my face.

It shouldn’t work, it doesn’t work. But damn it if I totally didn’t spend the workday following my viewing humming all of the songs in my cubicle.

Despite the fleeting moments of joy granted us by the 11 wonderful music videos found in this film, “The Greatest Showman” remains a mess. The heart is abundant, the message crystal clear, the songs are catchy as hell and high school theater kids will love the heck out of it. But it needed both more and less to achieve its want to be something great.