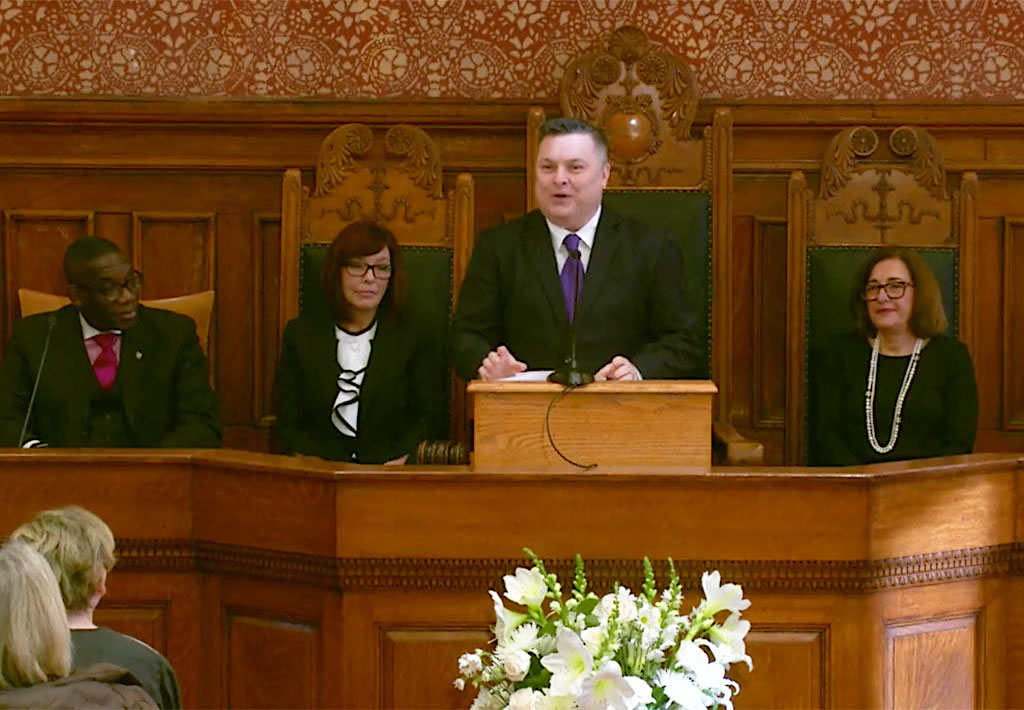 Marc McGovern speaks Monday after being sworn in as mayor at the City Council term’s inaugural meeting.

Nine city councillors were sworn into office today, followed by their swift selection of Marc McGovern as mayor, making for the third term in a row in which the mayor has been seated at the inaugural. The council term starts the first Monday in January, and this year that fell on New Year’s Day. 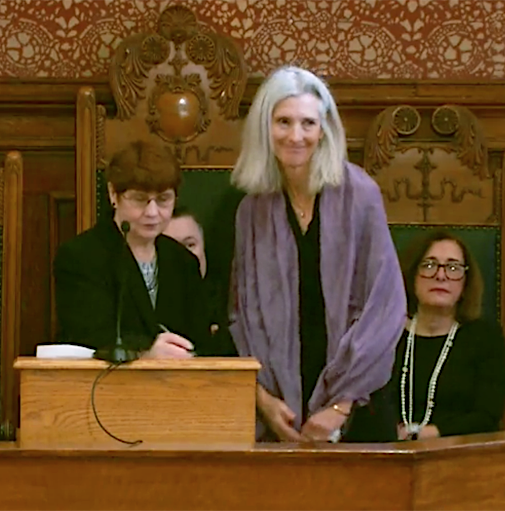 Jan Devereux arrives at the lectern to be sworn in as vice mayor.

Jan Devereux was voted vice mayor. Both elections came on the first ballot.

In his speech after being sworn in, McGovern said he looked to his youth soccer team of Cambridge United for inspiration in leading the city, because he and his diverse teammates were “a true representation of the Cambridge community. We came from different neighborhoods, we were different races, cultures and religions. You were just as likely to hear a play called out in Portuguese or Creole as you were in English. And although we were just teenagers, we took great pride in putting on that uniform and what it represented.”

“We were proud of our diversity and of our common goals,” McGovern told a packed Sullivan Chamber at City Hall. “When I thought about what I wanted for us [as a city], that team name kept coming to mind: Cambridge United.”

When Devereux was voted vice mayor, she took the stand for a brief speech, given unprepared, and said, “I look forward to being part of Cambridge United.”

The swearing-in ceremony and mayoral votes took only around an hour and 15 minutes to see through, but to see it meant coming to City Hall during a bitter cold snap. Temperatures were about 9 degrees as the inaugural began at 10 a.m., and forecasts suggested the day would see a low of -2 degrees.

“Could you turn to the person next to you,” said Bishop Brian Greene, senior pastor of Pentecostal Tabernacle, as he addressed the audience before giving an invocation, “and say ‘You must really love Cambridge to be out in this weather.’”

Every incumbent who ran for reelection in November won. The turnover came about because of three departures: Leland Cheung opted out after four terms; David Maher moved to serving full time as president of the Cambridge Chamber of Commerce after eight terms, with the roles overlapping at the end; and Nadeem Mazen vowed to stay in office no longer than three terms and left after two, initially with an eye on a seat in the U.S. House of Representatives.

The current council was “special” in having a mix of four members with four or less years of experience, “which brings new energy,” but guided by three members who together have more than 50 years experience, McGovern said. 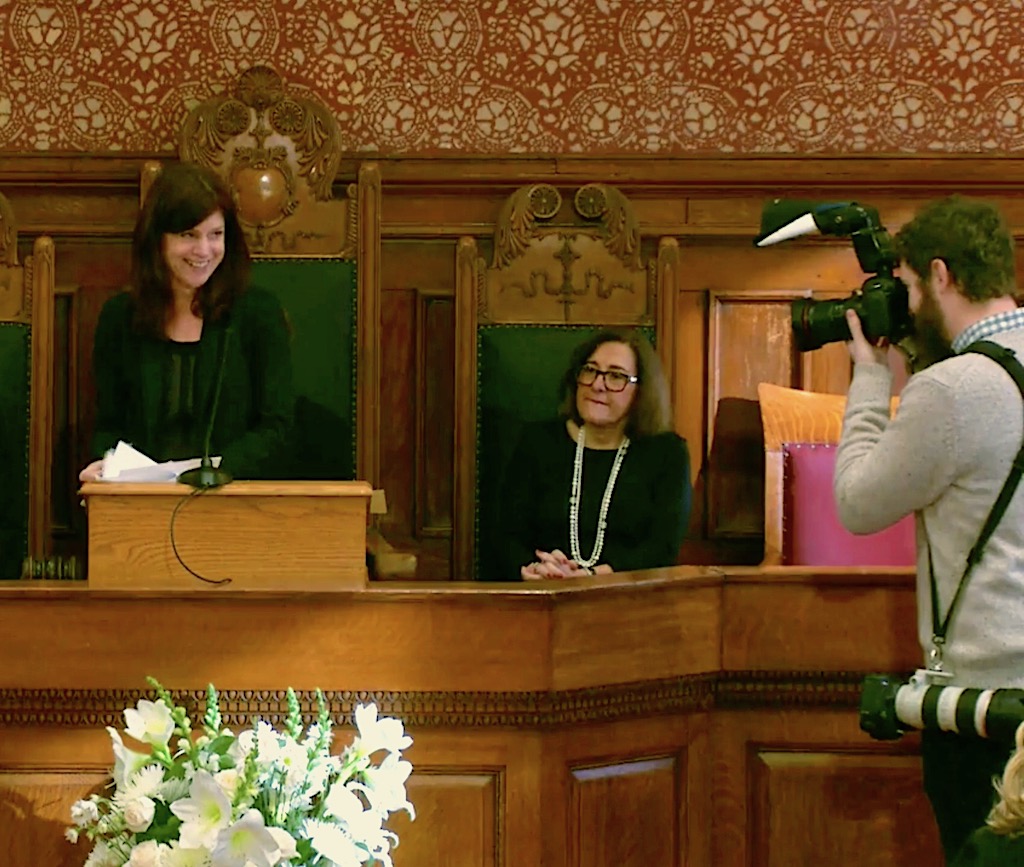 Alanna Mallon smiles for a photographer as she signs papers during her inauguration as city councillor for the 2018-19 term.

Mallon arrived to last year’s council race with good will from founding the Cambridge Weekend Backpack Program, which sends food home with more than 500 low-income students every weekend. She had powerful establishment backers, as well, starting with Maher, who brought her on as education liaison when he last served as mayor. 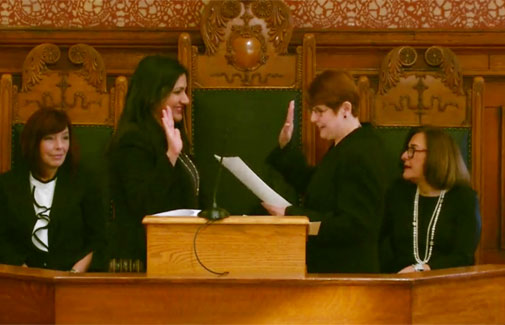 Sumbul Siddiqui is sworn in as councillor.

Siddiqui, a Cambridge native and lawyer for the low-income and elderly, as well as for low-income entrepreneurs, topped a large field of challengers by getting 2,532 No. 1 votes in the Nov. 7 balloting. She was aided by her deep roots in the city; she grew up in public housing and attended Cambridge Public Schools, graduating from Cambridge Rindge and Latin School. 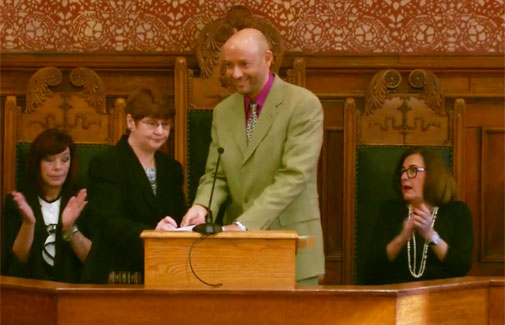 Quinton Zondervan looks at his family while completing the process to become a councillor.

Zondervan, a senior executive in software and biotech, is most known in Cambridge for his work in sustainability, including as president of Green Cambridge and the Climate Action Business Association and as a member of the city’s Climate Protection Action Committee. He co-wrote a zoning petition in 2013 with now state Rep. Mike Connolly that resulted in the Net Zero Action Plan to reduce city emissions from buildings to zero over the next 25 years.

McGovern and Devereux’s first-ballot elections looked like they might have challenges from older-guard councillors. McGovern saw a 7-2 vote for him as mayor initially, with Simmons and Toomey seeking to have Toomey appointed mayor instead. Seeing the majority – five elect a mayor, under council rules – Simmons sought to make the vote unanimous, and wound up changing her vote to McGovern although Toomey did not.

When it was time to elect a vice mayor, the first vote was 5-4 for Devereux, with councillors Kelley, Mallon, Simmons and Toomey looking to have Simmons take that role. But Mallon and then Kelley quickly changed their votes to Devereux.

In 2010 and 2012, the process to decide a council leader – who will also lead the six-member School Committee – had dragged on. The mayoral elections took up to 10 ballots (and, in 2012, required a special Wednesday meeting to resolve things) and lasted well into February, delaying the appointing of committee leaders and therefore the work of the committees, where details of more complex or controversial ordinances are hammered out before being heard by the full council.

The voting in 2014 was swift but twisty, with a failed effort to draft Simmons as mayor resulting in a process insiders deemed “bizarre” and criticized as “gamesmanship.” Her graceful rejection of the seat made her election in 2016 all but preordained.

The only controversy then was who would be vice mayor for the term, and it was settled quickly: McGovern, serving his second term, was chosen over Mazen, providing frequent chances to preside affably over meetings when Simmons was away or decided that sitting briefly as a regular councillor allowed her to speak more freely on a topic.

McGovern, a fourth-generation Cantabrigian and resident of Central Square, is a social worker who has worked with at-risk children and families for two decades; before moving to the council, he served on the School Committee for four terms. During his fall reelection campaign, he noted in candidate forums that he had written legislation with every fellow councillor – presenting himself as a uniter on a council where members’ testiness with each other could extend seemingly to the point of sabotaging policy orders.

It was a theme he returned to today, pulling out a prepared speech and thanking voters, his family, aides and city staff before speaking.

“We have a lot to be proud of. Yet despite our best efforts, despite being surrounded by world-class universities, being the innovation capital of the world and our AAA bond rating, we have far too many in our community who are not accessing the prosperity that surrounds us. Cambridge has a higher poverty rate than the state average. On any given night, upward of 500 people are in our shelters or on our streets. Death by overdose has doubled from 2015 to 2016. And although we send many of our high school graduates to Ivy League universities, far too many find themselves out of school or not employed just a few years after graduation.

“So although we need to take time to acknowledge and appreciate our accomplishments, of which there are many, we must never be complacent. Because there are still far too many of our friends and neighbors who are struggling.”

McGovern said he’d spent a lot of time thinking about how to move forward as a community, and said he kept coming back to the soccer team he’d played on from ages 12 to 18. “The name appeals to me because I believe there is much more that unites than divides us,” he said. “I believe we are all united in the desire for Cambridge to be a diverse and affordable city [and] for every Cambridge schools student to receive a world-class education [and that] every resident regardless of legal status, age, race, sexual identity or ZIP code is safe in our community.”

“And I know we are united in resisting and rejecting the racism, sexism and hatred that is plaguing our country,” McGovern said.

Being united doesn’t mean the councillors will always agree, or not make mistakes, he said, “but during those times of disagreement, frustration or mistake, let us not forget what binds us together as a community. Let us not forget that all of us … care deeply about our city [and are] united in wanting Cambridge to be a socially and economically just community for all who live here.”

Devereux said she was honored to be voted vice mayor and believed the 2018-19 council would be a “great team, and I think we are going to build bridges and we are going to unite the city. Because we have to. We have some huge challenges facing us as a city and as a country.”

McGovern has hired Wil Durbin as his chief of staff. Durbin had been legislative aide to Craig Kelley since mid-2015.

Reached after the inaugural meeting and lunch, Devereux reiterated that she was looking forward to working with McGovern and the council as a whole.

“I genuinely think we will work well together and will become a strong team,” she said of McGovern, praising his speech. “I really liked the Cambridge United metaphor, and think it bodes well.”

“And I’m obviously very excited about the three new members [and the overall] alchemy of the council. I’m confident it will be a positive and productive term,” she said.

Toomey noted by email that the new configuration of the council meant he has changed seats from the one farthest from where councillors enter and exit the chamber.

“I moved to [Michael] Sullivan and Maher’s old seat. Quick exit now!” he said via email. He’d been in the “Danehy seat” for 28 years “but needed a change.”