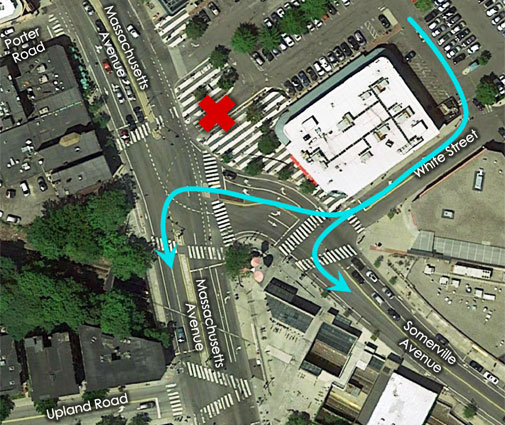 The goal is to simplify the nest of intersections surrounding the mall and T stop and make it safer for all – drivers, pedestrians and cyclists, Traffic, Parking & Transportation Department representatives said. The current five-phase traffic signal cycle (including one for pedestrians only and another to leave the mall parking lot) would be replaced by a simpler three-phase cycle.

The changes, intended to be low-cost and and come as soon as spring or summer, were shared Thursday with around 100 people gathered in University Hall at Lesley University, presented by Phil Goff of Alta Planning and city engineer Patrick Baxter.

Porter was the site of two deaths in 2016: Psychotherapist Marcie Mitler, 63, was hit by a car at 5:56 a.m. Feb. 18 while walking at Somerville Avenue and White Street, and died later at Massachusetts General Hospital; Ironwood Pharmaceuticals employee Bernard “Joe” Lavins, 60, was hit by an 18-wheel truck at 8:08 a.m. Oct. 5 while bicycling on Massachusetts Avenue across from the shopping plaza and pronounced dead at the scene.

While in conversation it was clear the deaths had been considered in the redesign, crash data used to support the project’s direction covered five years ending in 2012 – before Mitler and Lavins were killed.

Several attendees voiced concern about the island’s removal, calling it a safe place for slower-moving pedestrians – the elderly, parents with strollers and others – and worried that taking away a visual calming device for more open roadway (one speaker described the proposal as a “six-lane Florida Highway”) could empower drivers to speed. Traffic, Parking & Transportation representatives rebutted the “stranding concern,” saying the crossing time across Somerville Avenue’s mouth would be extended to 35 seconds from the current 24.

Other concerns were backups on streets nearby that feed into the system, namely Upland and Roseland, as well as the design’s implied, increased load on White Street, the slim street on the parking lot side of the shopping plaza that connects Elm Street to Somerville Avenue. Other commenters worried that safety measures did not go far enough to protect the growing cycling population, and some worried that Traffic, Parking & Transportation did not have a plan if the implementation didn’t work as anticipated. The engineers said most changes were signal alterations that could be tweaked and recalibrated easily, even providing variable cycle times for peak vs. non-peak hours.

Many points raised could be blended into the final design, Goff and Baxter said.

A few people connected with the Porter Square Neighborhood Association were additionally concerned with the aesthetics of simply using planters to seal off the mall exit by CVS (“cheap-looking” was the phraseology) and said they hoped for a better longer-term solution. That would be up to the mall’s owner, Gravestar, which Traffic, Parking & Transportation representatives said they had been working with closely.