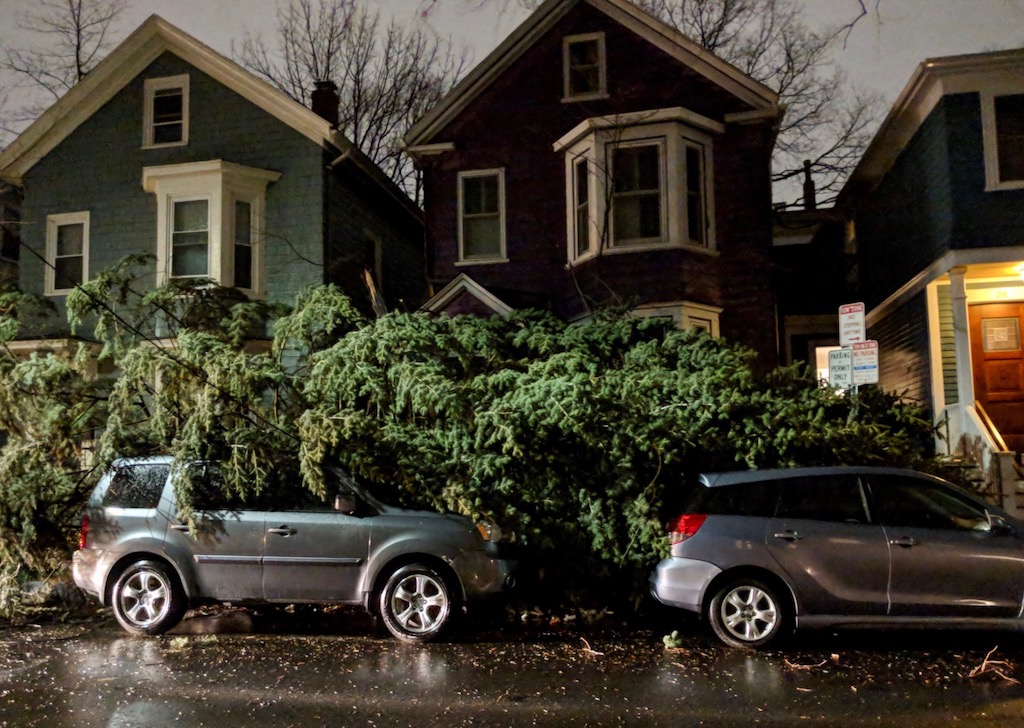 A tree felled by rain and wind during a March 2 storm left several residents on Pearl Street in Cambridgeport without power and Internet for two days. (Photo: Tania Mejer)

With the fizzling of a storm forecast for Wednesday – it was expected to drop up to foot of snow, but no snow came – and temperatures expected to rise into the 50s in the coming week, winter seems to be over with practically as well as officially (on the calendar, spring arrived Tuesday, March 20).

So what happened? In addition to noting the lack of major flooding over the winter, Department of Public Works community relations manager Dan Riviello was able to offer some at least semi-official figures from shortly after a March 13 storm – now likely the season’s final – that left the city dealing with an estimated 22 inches of snowfall.

Update on April 2, 2018: A spring storm brought a surprise flurry today, resulting in less than an inch of snow that melted quickly.

There were roughly 75 tree calls, including around 20 for “whole tree failures.” About a third of the calls were for trees that were at least partially on private property but fell into the public way.

Cambridge got off light in terms of power outages, with some 1,400 customers going dark at some point over the winter. “There was not a lot of damage from any of those storms,” said Priscilla Ress, a senior media relations specialist at Eversource Energy in Springfield.

Power was also returned relatively quickly over the course of the storms, unlike in parts of the state that saw more impact from storms. In southeastern Massachusetts’s Plymouth County, where a March 2 storm dealt a harsh blow, power was out for as much as four days in 14 communities for up to 85 percent of residents, with Eversource not even able to offer an estimated time for repairs for much of it. 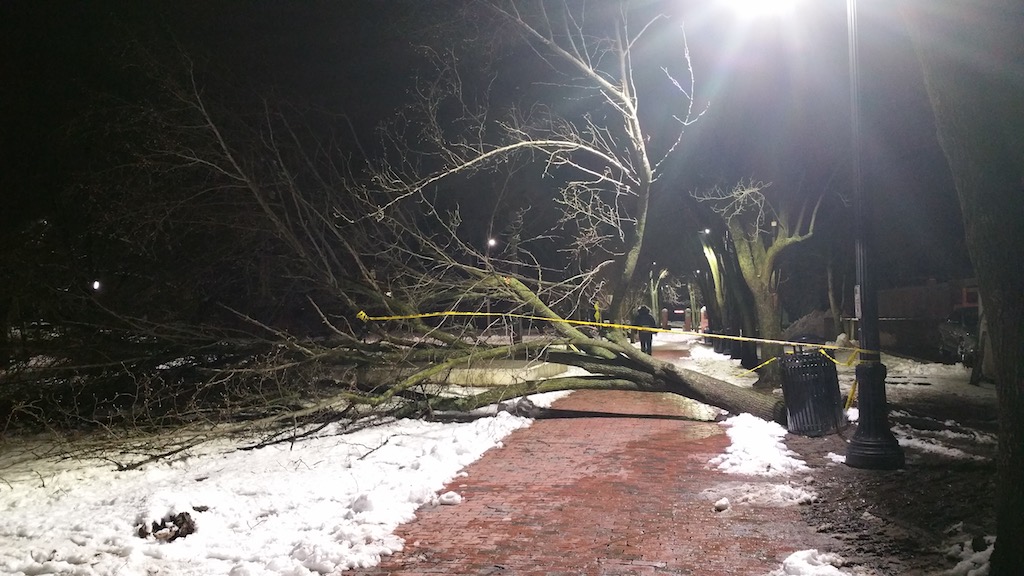 A tree collapsed March 8 across the Linear Park path by the Davis Square T stop in Somerville after a snowstorm. (Photo: Charles Teague)

Still, falling trees did create hassles for Cantabrigians, including a patch of Cambridgeport where lines for power and Internet were felled and residents went without for a two-day stretch.

The National Weather Service outpost in Taunton relies on citizens for its snowfall estimates and has no one reporting in Cambridge or Somerville – surprising, given that Cambridge hosts the Massachusetts Institute of Technology and its Department of Earth, Atmospheric and Planetary Sciences. The closest snowfall reporter relied on by the National Weather Service is in Arlington.

“Good point,” a senior official at EAPS said March 14, promising to raise the issue with students and faculty.