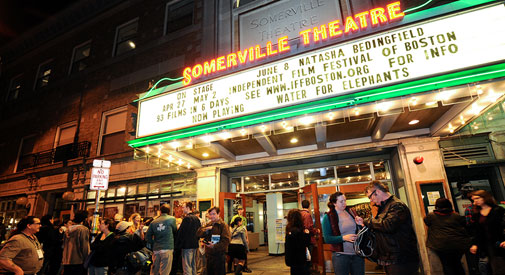 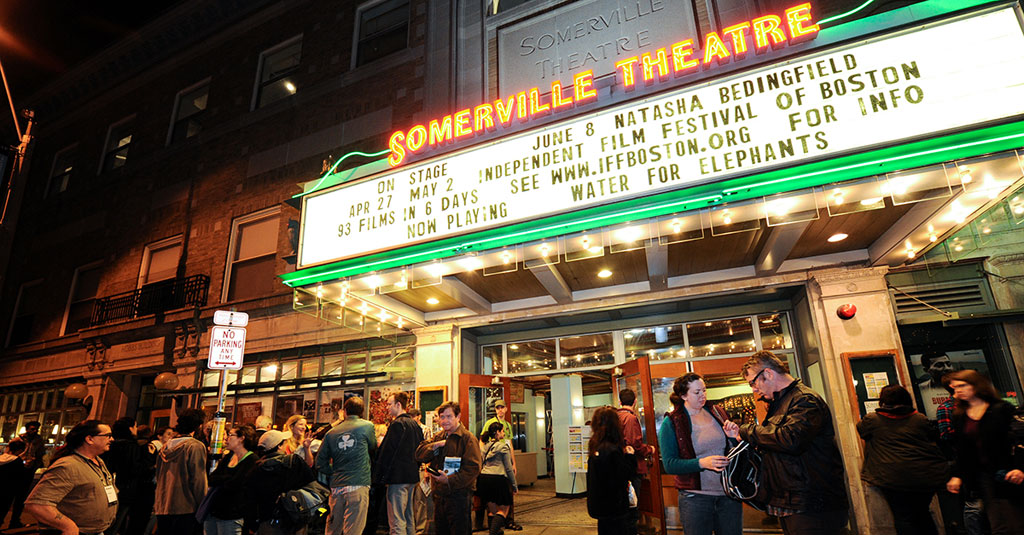 The Somerville Theatre in Davis Square is one of the key screening sites for the Independent Film Festival Boston. (Photo: IFFB)

Spring may be reluctant to show its face, but signs of cinema and community are well upon us as the 2018 Independent Film Festival Boston lifts off Wednesday, running through May 2 with most exhibitions taking place at the Somerville and Brattle theaters (with a smattering of screenings at Coolidge Corner). How perfectly apt: an independent film festival exhibiting exclusively in independently run theaters.

Hard to believe it’s been so long since key founders Scott Moomaw, Jason Redmond and Adam Roffman launched this gem of a fest (in its 16th year, it’s now in the capable hands of Brian Tamm and Nancy Campbell) that has all the neat trappings of Sundance or SXSW in our own backyard, and all run by an army of volunteers. This year’s theme, “Find Your Crowd,” is fitting, as the one thing that makes the Boston fest so endearing is its sense of community, be it hanging out in the lines wrapping around the Somerville Theatre or gathering at the Sligo Pub, the Rosebud or Mike’s – where folks break into impromptu circles to talk all things cinematic with infectious enthusiasm.

The lineup, which features 24 narrative films, 33 documentaries and shorts (not to be missed), kicks off with “Eighth Grade” a first-time feature by Hamilton-bred Bo Burnham (MTV’s “Zach Stone is Going to be Famous”) about a girl (Elsie Fisher) who dreams of becoming a YouTube star (like Zach Stone!) and her not-so-pleasant final days of junior high. Another film with a local tie, “Hot Summer Nights” casts Oscar-nominated Timothée Chalamet (“Call Me by Your Name”) in another coming-of-age tale set on the Cape. On the humorous side – with a side of social bite – there’s “Blindspotting,” about best buddies (one played by “Hamilton” star Daveed Diggs, who will be in attendance) coping with race and class issues as Oakland, California (site of “Fruitvale Station”), gentrifies around them; and “Support the Girls,” the latest from mumblecore cornerstone Andrew Bujalski that chronicles the goings-on at a “Hooters”-esque sports bar. Darker and more emotionally charged fare include “Disobedience” based on Naomi Alderman’s novel of forbidden passion and starring Rachel Weisz and Rachel McAdams, “Damsel” starring Robert Pattinson, so good in last year’s “Good Time,” in a tale about a businessman who journeys west to be with his fiancée, “Leave No Trace,” helmed by “Winter Bone” director and former Cantabrigian Debra Granik and starring Boston-born Ben Foster, and “First Reformed,” the travail of a military chaplain wracked by grief starring Ethan Hawke and written and directed by “Taxi Driver” scribe Paul Schrader, who may be in attendance. Also on the docket from Sundance regular Michael Tully (“Ping Pong Summer”), “Don’t Leave Home” a contemplation on the intersection of faith and art.

Of the foreign narrative offerings, courtroom drama “The Third Murder” from Hirokazu Kore-Eda (“Nobody Knows”) and the Icelandic backyard feud over a shrub, “Under the Tree,” grab the eye.

Among the many non-narrative selections, several touch on salient current social issues. “Black Memorabilia,” “This One’s for the Ladies” and “Boom for Real,” which looks back at a young Jean-Michel Basquiat, all tackle matters of being black in America. “Dark Money” and “Generation Wealth,” by “Queen of Versailles” director, Laura Greenfield, chase the cash in Montana politics and the pockets of those who covet it. Origins and roots get explored in “Dawnland,” which looks at the harsh cultural cleansing of a Native American woman in Maine and “Farmsteaders,” where a new generation tries to reboot the family farm. “TransMilitary” trains its lens on the challenges that confront the nearly 15,000 transgender people serving in the military.

On the more personal level, “Three Identical Strangers” checks in with triplets separated at birth who reunite and uncover a dark family secret. A passion project to be sure, “Intelligent Lives” looks at people with intellectual disabilities – the challenges they face and their hidden abilities – as well as at the people who love them. The non-narrative “centerpiece film” of the festival (“Blindspotting” being the narrative counterpart), the film is produced by actor Chris Cooper and his wife Marianne Leone Cooper, whose son Jesse passed away from complications due to cerebral palsy and have since come to champion causes for kids with special needs. The pair are expected to be in attendance with director Dan Habib.

For the angry, old-school mosh-pit minded there’s “The Godfathers of Hardcore,” a look back at one of punk’s lesser known, cornerstone bands, Agnostic Front. And over in the weird, cool and did-you-know bin, “That Summer” dials back to the quirky mystique of the Beale sisters, leveraging found footage shot before the riveting 1975 Maysles’ classic, “Grey Gardens.” “Rodents of Unusual Size” looks at the explosion of nutria (aquatic rats that can be as big as 30 pounds) in Louisiana and, in “Nothing Truer than the Truth,” local filmmaker Cheryl Eagan-Donovan follows the theatrical and libertine journeys of Edward de Vere, the 17th Earl of Oxford in Venice and Verona, where some allege he accumulated the material that would become Shakespeare’s “Romeo and Juliet,” “Othello” and “The Merchant of Venice.” Or was he in fact the bard himself? Mark Rylance and Sir Derek Jacobi chime in alongside scholars.

Perhaps the most anticipated doc of the lot comes from Academy Award-winner Morgan Neville (“20 Feet From Stardom“) as he shines a light on the life and times of class act Fred Rogers in “Won’t You Be My Neighbor.’’ For those who think the man (he gave a great speech at my college graduation) clad in staid Ozzie and Harriet attire just ran a kiddie show, be prepared to have your eyes opened to just how radically out in front of social issues he was.