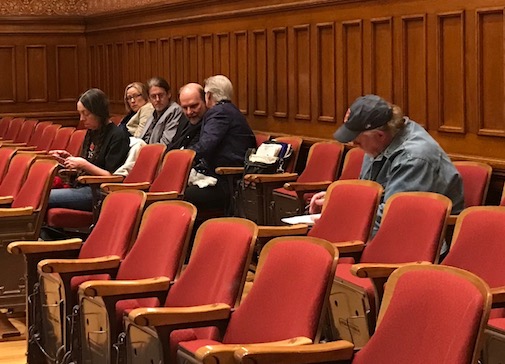 Glenn KnicKrehm listens to the whispered words of an adviser during an April 23, 2018, meeting of Cambridge’s City Council when an order was heard about his one-time proposal to buiid a grand hall for the performing arts in Kendall Square.

The philanthropist who promised a grand hall for the performing arts in Kendall Square – and now is trying to sell the land, 19 years after it was set aside for his Constellation Center – is being asked to hold off on a sale while the city looks into its tax status and zoning history.

News of the proposed sale April 19 was greeted with outrage by some in the community, who accused Glenn KnicKrehm and his Constellation Charitable Foundation of land banking, meaning he sat on developable, tax-exempt land until its value rose high enough for him to sell at a profit.

The order raises a question about the land’s long tax exemption, which allowed KnicKrehm to research and patent acoustical concepts without an urgency to apply them in his concert hall, but the term “land-banking” didn’t come up Monday as the City Council discussed the request; its authors talked mainly about exploring whether the 35,865-square-foot lot at Kendall and Athenaeum streets could be required to stay focused on the arts.

“A lot of people are hoping that that remains how the land is going to be sold and developed,” councillor Tim Toomey said. “Certainly the city and the public has been very patient with this owner. We’d like to know what transpired and how to move forward.”

Councillor Alanna Mallon said the order was needed at a time the city has been forced to think how it supports the arts, especially as it looks less likely that the city will save the EMF Building from shutting down near Central Square, displacing hundreds of musicians and artists and a recording studio.

The former Constellation Center might, some day, even make up for some of the loss. Councillor Dennis Carlone, an urban planner, said he played a role in the 1.3 million-square-foot Cambridge Research Park “planned unit development” that set aside land for KnicKrehm’s concept and was “pretty sure the developer-prepared PUD petition calls out ‘cultural facilities.’ One can make a case that would need zoning relief otherwise.”

That future use might not be as grand as the Constellation Center – envisioned as a five-hall facility for music, opera, theater, dance and cinema and to be used for community, educational and family events – but “I think we all want something active at the lower level to bring people in,” Carlone said.

KnicKrehm attended the previous City Council meeting, when Toomey coincidentally filed an order asking for an update on the site, not realizing a sale of the land had already been announced; but not Monday’s meeting. A message was left Tuesday for KnicKrehm and his exclusive agent for the land sale, Andrew W. Hoar, president and co-managing partner of the real estate firm CBRE New England.

While KnicKrehm has said he plans to use the money from a land sale to relocate his concept for a performance hall, it’s not guaranteed to be in Cambridge. He promised only that his board expected to look “at a range of sites in Greater Boston.”

Jason Weeks, executive director of Cambridge Arts, said he’d “hoped and expected” that the Constellation Center would become a place where the arts could thrive. To hear KnicKrehm planned to sell and likely relocate was “a deep disappointment.”

“I doubt [his Constellation Center concept] will be in Kendall Square or East Cambridge or any other place in the city, and it’s a terrible shame,” Weeks said.

The combined loss of the Constellation Center and EMF “make a really strong case for our city to be more aware of the arts,” Weeks said.