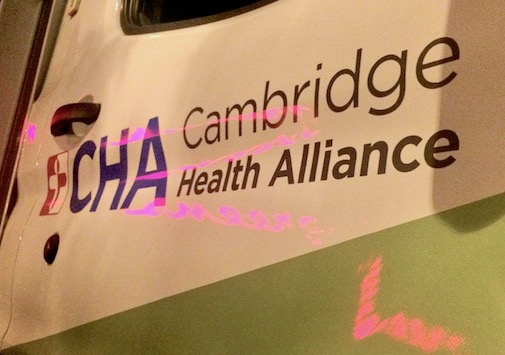 Changes in how Cambridge Health Alliance approaches medication has added to its revenue surplus this year. (Photo: Marc Levy)

Cambridge Health Alliance looks likely to earn a substantial surplus this year, and one big reason is a service that many people don’t associate with hospitals or doctors: filling prescriptions.

The health care system’s most recent financial report shows net income of $18.5 million as of the end of March, covering nine months of this fiscal year. That’s far more than the Alliance’s budget forecast of $2.7 million in profit for this point in the fiscal year. And it comes despite lagging numbers of patients visiting CHA doctors and getting admitted to the hospital.

Pharmacy operations contributed a huge boost of $13.3 million in unexpected revenue to the bottom line, an analysis presented last month to CHA trustees. About $10.3 million of that comes from new pharmacies opened in Malden and East Cambridge, spokesman David Cecere said.

The remaining $3 million is credited to a revised employee benefit that encourages Alliance workers to use the organization’s own pharmacies by charging no copay if they are enrolled in an Alliance health plan, Cecere said. Previously the Alliance paid an “outside organization” to provide the drugs; that costs more than the expense to acquire the medications itself, he said.

Cecere declined to say how much the pharmacy operations earn after deducting the cost of the program from revenue. “We do not disclose overall surplus numbers for our pharmacy operations,” he said. Adding outpatient pharmacies increases convenience and options for patients and can cut expenses by “keeping services inside our system.” he said.

In another financial benefit, the Alliance pharmacies can buy drugs at substantially below-market costs under a federal program called 340B for the rule that established it. Hospitals in the 340B program pay the reduced price, then charge insurers, including Medicare, the full price for the drugs. The benefit applies only to prescriptions filled by patients of doctors at the hospital.

The program has attracted controversy because it was set up to help safety-net hospitals such as the Alliance that serve large numbers of poor and uninsured patients, but has expanded to include many hospitals that report few community benefits. Hospitals are also allowed to contract with retail pharmacies to fill prescriptions for their patients, which increases their profits, and they’re not required to offer low prices. The Alliance charges copays only slightly more than MassHealth to patients without insurance, Cecere said previously.

Opening the pharmacies could add to Alliance earnings from the 340B program because the discount at hospital pharmacies applies to drugs for any Alliance patient regardless of insurance coverage. At retail pharmacies under contract with the Alliance – there were 108 in 2016 – it covers only patients with private insurance.

Cecere said the Alliance is audited by the federal agency that supervises the program “to confirm our 340B program is operating as the regulations intend.” The money earned by paying less than market price for drugs and charging insurers full price is used “to support the provision of care in our safety net environment,” he said.

In another potential cost-saving change related to filling prescriptions for patients, the Alliance is providing some expensive psychiatric drugs in special outpatient clinics instead of in the hospital.

These drugs are injected and their effect lasts for 30 days, unlike oral medications that must be taken every day. Known as long-acting injectables, or LAIs, they can greatly improve treatment for people with schizophrenia, who often relapse because they stop taking their pills.

The Alliance has started giving LAIs to certain patients when they’re discharged from the Everett Hospital or Cambridge Hospital psychiatric ward, said Rebecca Tourtellotte, a clinical pharmacist. The patients get injections in a “transitional outpatient clinic” set up for that purpose – the Alliance doesn’t get reimbursed for the drugs if administered in the hospital, and lost out on about $150,000 last year on drugs given to patients while in the psychiatric ward, according to research by Tourtellotte and Jessica Goren, a senior clinical pharmacist.

Giving the injection as an outpatient drug means it must be covered by patient insurance, which could involve a hefty co-payment. Goren and Tourtellotte said most Alliance inpatients who would be affected by the new procedure have MassHealth coverage, and would see minimal copays.

If a patient’s private insurance doesn’t “completely cover [an LAI], we would try to find a different drug,” Goren said. According to online listings, two of the three largest private insurers in Massachusetts don’t cover the most frequently used LAI at the Alliance, called Invega. MassHealth covers Invega with a prior authorization.

The policy went into effect in late March in Everett and last month in Cambridge; as of last week only two patients had received an LAI in an outpatient clinic upon discharge, Goren said. Last year about 100 were given to patients in the hospital, according to the research by Tourtellotte and Goren.

“The person has to agree” to an LAI, Goren said. “It needs to be appropriate.” The drugs can have serious side effects and doctors need to make sure selected patients “tolerate it,” she said.”Our goal is to ensure it’s safe for you.”

In a supplementary statement emailed by Cecere and attributed to Goren, she said studies show that LAIs reduce hospitalizations for schizophrenia by 20 to 30 percent, cut the rate of incarceration for people with schizophrenia and reduce homelessness among people with schizophrenia compared with oral medications. The Alliance is studying how many of its patients who are discharged with LAIs get their next scheduled injection and attend their scheduled clinic visits, according to the research presentation.