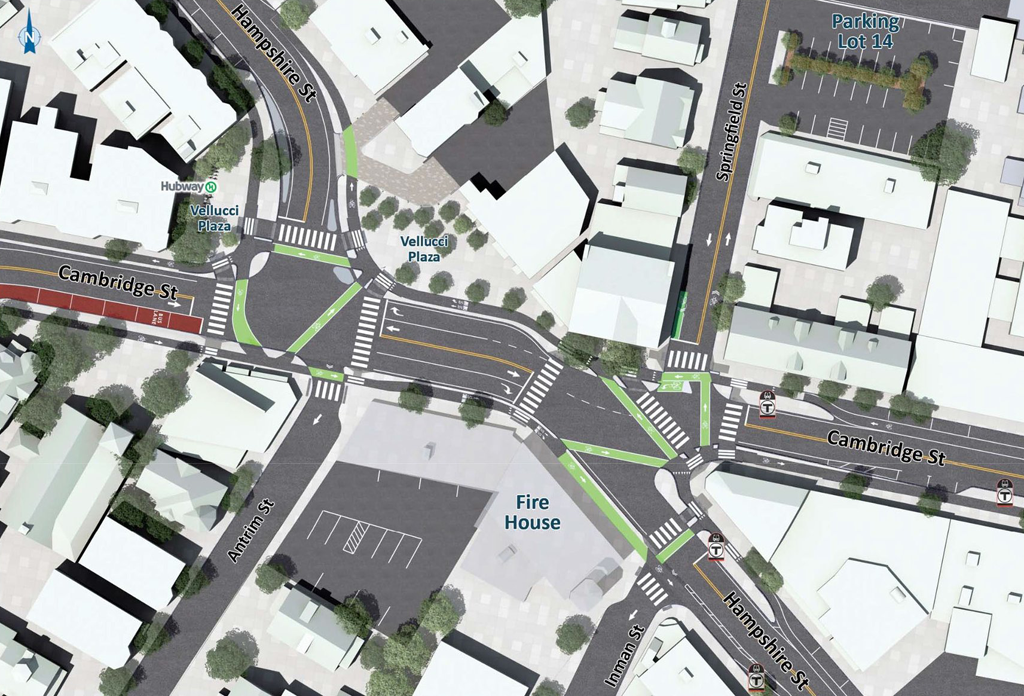 A request to the state for permission to reconfigure Inman Square was put on hold Monday by a city councillor after learning an appeal of the project had been filed.

“I’m not supportive of the project. I think I’m going to charter right it and give us a couple of weeks to reconsider,” councillor Quinton Zondervan said, referring to a power that bumps conversation of a topic to the next regular council meeting – in this case, by another two weeks, because of the Memorial Day holiday. “We need to make really sure we follow due process … Citizens have filed an appeal [that] deserves to be heard.”

The night’s council meeting heard some 20 citizens and a complement of officials weigh in on changes that would take the peculiarly elongated Inman Square and in essence turn it into two intersections, bending traffic from its current path by shrinking a park called Vellucci Plaza on the east side of the street and adding a separate pedestrian plaza on the west, in front of local businesses such as the Punjabi Dhaba restaurant. Some residents complain about the design; the loss of several mature shade trees from the plaza has disgruntled some too. 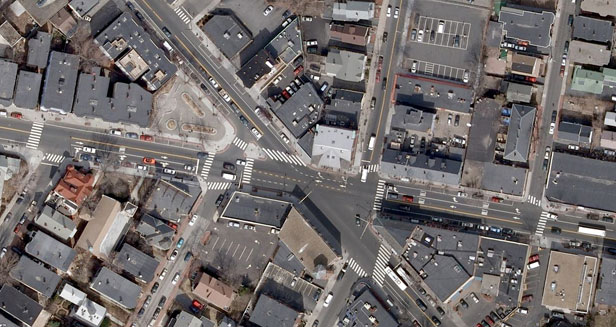 An overheard shot shows the unusually elongated nature of the intersection of Cambridge and Hampshire streets in Inman Square.

Still more were upset that work is expected to take three years at a cost of $6 million.

Mayor Marc McGovern reminded the residents and officials at Monday’s meeting that he and councillor Tim Toomey had filed a policy order for changes to the square three years ago – for at least the fourth intensive look at a redesign since 1994 – before the death of a bicyclist two years ago seemed to give the changes a new urgency. “I feel horrible” at the time it’s taken to get changes proposed, McGovern said. “I don’t want to delay this another two years and take that risk again.”

The City Manager’s Office wanted council approval to get Inman Square changes to the state Legislature as a home rule petition to be dealt with before the body begins its break Aug. 1.

An alternative design for Inman Square will be proposed in a newspaper-style publication that will be distributed next week, Pitkin said.

It will be the city’s Historical Commission that decides whether the Conservation District must approve of the plans before the council can vote. The commission will hear the issue at its June 7 meeting, said Charlie Sullivan, its executive director. If members agree with the appeal and send the plans back for a vote, the Conservation District could hear the case July 2 – only four weeks before the end of the legislative session. By that time the council will be on break for two months, with only one regular summer meeting scheduled, July 30. (The council can come back into session for special meetings.)

If the commission disagrees with the citizens’ appeal, though, the council would be able to pick up the home rule petition at its June 18 meeting.

Neither the appeal nor the concerns of councillors such as Zondervan, Alanna Mallon and Craig Kelley could reasonably change much about the Inman Square plans, City Manager Louis A. DePasquale said.

“I certainly respect all of the opinions of the councillors here tonight, but I can tell you this has been the most detailed process of outreach and working with people that I have been involved with – not just as city manager, but that I can remember for a long time,” DePasquale said, noting some dozen meetings not including time spent before the council. “We tried to address the concerns of all residents in the city … we obviously did not, but it’s not from a lack of effort, it’s not from a lack of participation.”

“I don’t really see us coming up with another proposal at this point, so I’m not sure where we’re going to go from here,” he said.

City engineer Kathy Watkins and Joseph Barr, director of the city’s Traffic, Parking & Transportation Department, had explained that some of the objections residents had about design elements proposed for or missing from a new Inman – bike lanes that were level with sidewalks, or a lack of bike-only traffic signals – were still up for discussion or simply hadn’t been decided yet.

McGovern gave a similar reminder that the home rule petition vote was only to get permission to make changes to Inman Square, without specifying what those changes were.

Still, Zondervan used his charter right, and the meeting moved on to other topics.

This post was updated May 22, 2018, to correctly identify the action John Pitkin said was “a farce.”