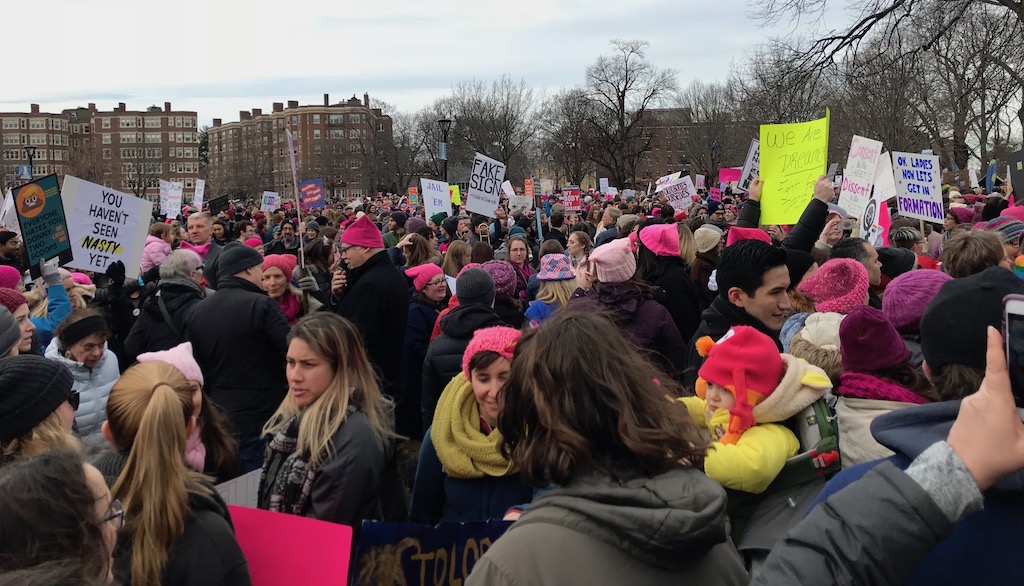 The ACLU of Massachusetts has filed a lawsuit challenging the City of Cambridge’s policy of charging event organizers for public safety services as a condition for granting permits for rallies and demonstrations in Cambridge parks.

“The right to join with neighbors in protest or peaceful assembly is critical to a functioning democracy and at the core of the First Amendment,” said Carol Rose, executive director of the ACLU of Massachusetts, in a press release. “At a time when the federal government is inciting division and seeking to chill free speech, the voices of these organizers and participants should be encouraged and applauded, not taxed.”

Despite completing the permitting process and paying permit application fees before the event, organizers – operating as the January Coalition – were told less than two weeks before the event that they could be additionally charged for public safety needs, including police coverage and emergency medical services. That discussion happened after the organizers mentioned to police that there could be counter-protesters at the event, according to the lawsuit.

The Women’s March in Cambridge went forward Jan. 20 and was peaceful, with a light police presence. Shortly afterward, organizers said they received bills totaling thousands of dollars for police details and emergency medical technician services and were told that more – including invoices for police details from neighboring cities and towns – would be forthcoming.

“These bills are a burden on our advocacy. Massachusetts Peace Action is a member-funded organization dedicated to a just and peaceful U.S. foreign policy. Our limited funds are used to advocate for peace and diplomacy, and our work rests firmly on the First Amendment,” said Michelle Cunha, assistant director of Massachusetts Peace Action and a Women’s March organizer. “To erode the foundation of our work erodes the foundation of our country. This lawsuit will help clarify everyone’s rights to free speech and assembly.”

When dignitaries such as foreign heads of state, national leaders, military leaders and religious leaders visit Cambridge, the need for law enforcement to ensure their safety “can result in significant resource demands for the Cambridge Police and the city,” said Jeremy Warnick, director of communications and media relations for Cambridge police. For instance, when then vice president Joe Biden visited in October 2014, security demands cost $23,000 excluding the department’s normal, day-to-day costs, but was “on the higher end” of the year’s 20-plus security demands for visitors.

Those costs are covered by Cambridge, Warnick said in 2015 as part of a request for information from the City Council.

According to the complaint, charges by a local government for basic public safety services at “expressive events and assemblies” in public parks is inconsistent with the First Amendment and the free speech and assembly provisions of the Massachusetts’ Constitution, unlawfully shifting to those exercising constitutional rights the burden of paying for public protection. For that reason, according to the complaint, they are an unlawful “tax.”

“There should never be a tax on speech and assembly,” said Ruth Bourquin, senior attorney at the ACLU of Massachusetts. “The event organizers and ACLU alike are concerned about the impact of the city’s practices on the exercise of free speech of all who seek permits for the Cambridge Common and other public parks.”

Lee Gianetti, director of communications and community relations for the city, said a copy of the lawsuit was received Tuesday afternoon, and “We therefore have not had an opportunity to fully review it.” But, while it’s not the city’s practice to comment on ongoing litigation, he passed on an email sent to the City Council by City Manager Louis A. DePasquale that said the issue had long been in discussion with the ACLU and he was “disappointed that they chose to go to Superior Court.”

“I believed we were working collaboratively on a solution” and that a resolution was “close,” DePasquale said. Now, with the lawsuit filed, “I will continue to work with the ACLU on a resolution.”

This post took significant amounts of material from a press release. It was was updated July 3, 2018, with links to the suit and comment from the city.