‘Support the Girls’: Life’s throwing some curves at eatery where servers, not food, are the object 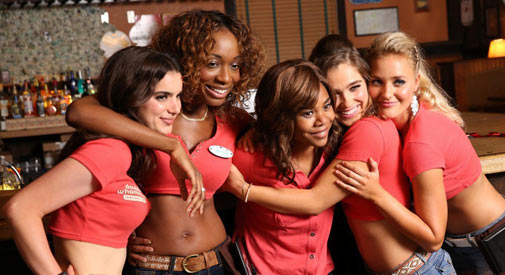 ‘Support the Girls’: Life’s throwing some curves at eatery where servers, not food, are the object

The women in the world of Andrew Bujalski’s “Support the Girls” are underestimated fighters. They live their lives with a performative ease, knowing whom to placate, whom to charm and whom to leave behind. It’s the focus on these women in a single day of their lives and the sexist nonsense they need to deal with to get by – rather than the obvious joke machine of working in a Hooters-lite local bar and grill – that makes “Support the Girls” such arresting entertainment; by the first few moments we’ve already drawn in. In a dramedy with a stunning, anchoring performance by Regina Hall, Bujalski has created something beautiful with bare-bones humility, humor and humanism. 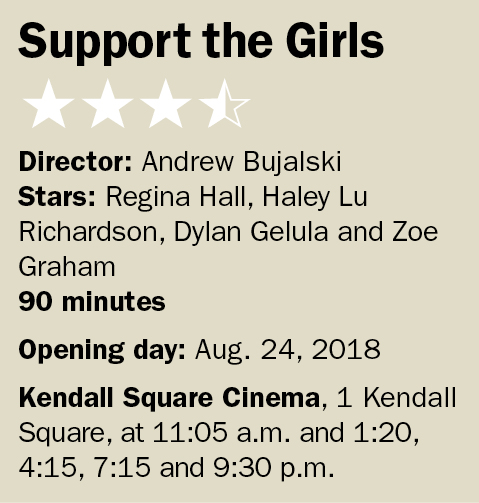 Hall plays Lisa, the manager at Double Whammies, a Texas “sports bar with curves” where she plays the matriarch to a bunch of 20-somethings looking to make good tips from locals pulling in from the highway. Over the course of a tedious and tediously strange day, we watch as Lisa’s situation grows decidedly worse as she’s undervalued at work and met with little ambition from her partner at home. She’s a near saint for the frustrations she has to plow through, though it’s made that much more bearable with the aid of Maci (Haley Lu Richardson) and Danyelle (Shayna McHayle).

Written by Bujalski, the film is intimately told with an untidy end that leaves many, if not all, of our main characters still floundering. That’s part of the magic of the film. It’s unassuming by nature, taking ordinary women and their ordinary lives and allowing them to become more as a result of the humdrum beat of their dreams and lifestyles. Bujalski and the combined charisma of his actresses create a film in which the most mundane kitchen work setting can be seen as exciting.

While the script is an enriching and clever backbone, it’s the performances by the leads, especially Hall, that add needed warmth. For anyone accustomed to Hall’s more comedic bouts (such as last year’s “Girls Trip”), her turn as Lisa will be a welcome surprise. While she still is able to land a few well-timed jokes, the heart of the role comes from the discontent and sadness beneath a well-composed veneer. She’s a lonely woman holding on to a sinking ship of a job because it’s all she has going for her, and Hall conveys that quiet desperation in her eyes and through subtle, physical tics. It’s a beautifully constructed performance that should open fans’ eyes to what the actress can accomplish.

McHayle and Richardson are equally as winsome, with the latter giving further proof that she may be one of the most versatile actresses of her generation. Richardson’s ray of sunshine is a dramatic pivot from her part in last year’s incredible “Columbus,” the only similarity being the youthful exuberance that washes off of her.

Boston native Bujalski has a reputation from being the “godfather” of the “mumblecore” scene, a genre that’s been aped and driven into the ground due to the misinterpretation of its appeal, using somber silence and awkward improvisations to give off a hopefully “authentic” atmosphere. Where Bujalski gets it right and so many others don’t is his reliable structure and an understanding the genre doesn’t have to be sad to be good but, rather, there’s an expectation to understand life and its monotony. “Support the Girls” is funny, but more than anything it moves with graceful melancholy, demonstrated perfectly when Maci shouts to a sad young woman that everything will be okay – and Danyelle disagrees. Among all of the drama of dress code and boss and employer rifts, that’s what “Support the Girls” is trying to get at: Today might not be okay, it may be one when you segue from crying to laughing hysterically, but this day will end and you’ll get in your car – like the young woman did – and drive away, looking already to tomorrow to begin fresh.