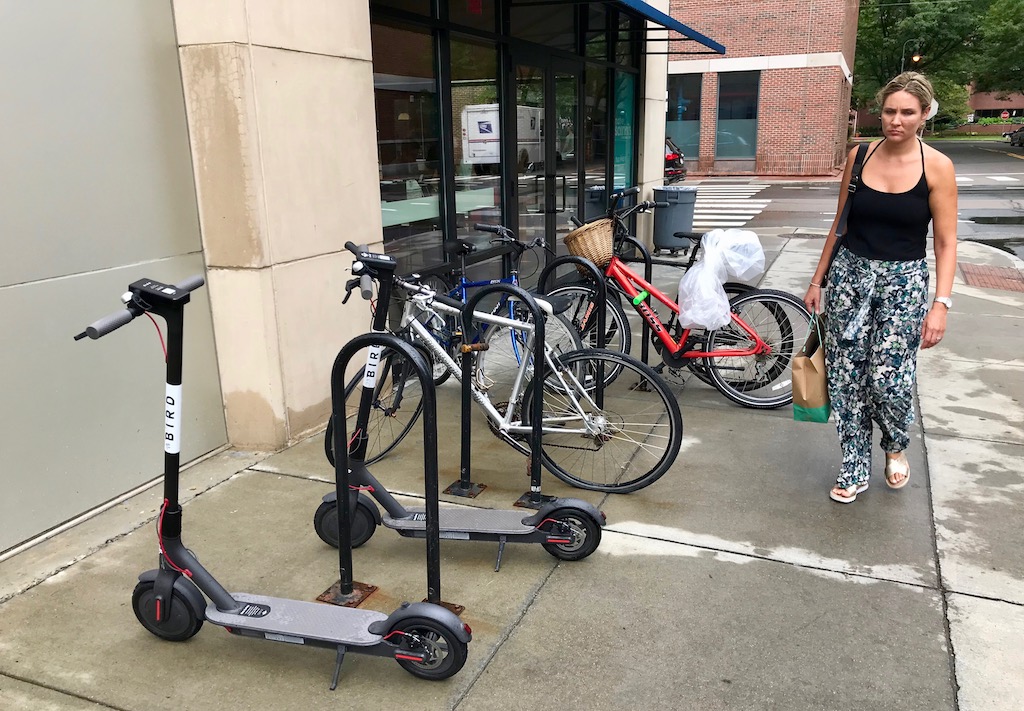 Bird scooters, which can be used when unlocked by an app, wait on Rogers Street in East Cambridge. (Photo: Marc Levy)

How will electric scooters be regulated?

Who’s getting beer and wine – or in trouble for it?

License Commission, 3 p.m. Wednesday. Hotel 1868, expected to open soon in Porter Square on Massachusetts Avenue, seeks its license for 50 rooms and 100 occupants in a 22,042-square-foot building with a 47-car parking garage, and Thelonious Monkfish in Central Square will ask to change its name to The Mad Monkfish after a complaint from the Thelonious Monk estate. There is also a request to serve beer and wine from Beauty’s Pizza on Hampshire Street and to add cordials and liqueurs to the beer and wine already served at Veggie Galaxy in Central Square, while Abigail’s in Kendall Square appeals an alcohol violation finding to the state and World of Beer at Cambridgeside looks to be in a world of trouble, accused of paperwork troubles, fire violations and running a prohibited happy hour. The Automatic on Hampshire Street, meanwhile, just has to answer for having live entertainment outdoors without permission.

What’s being done about empty storefronts?

Economic Development and University Relations Committee, 4 to 6 p.m. Wednesday. Storefront vacancies and updates from a Retail Strategy Report will be discussed by this committee led by city councillor Sumbul Siddiqui.

Cambridge Redevelopment Authority, 5:30 to 8 p.m. Wednesday. A number of Kendall Square sign and construction issues will be discussed, along with a Foundry building update. Before the meeting is a 2:30 p.m. tour of 325 Main St., formerly Three Cambridge Center, to discuss development there (starting from the lobby of 255 Main St.); and a 4 p.m. Public Design Review Committee Meeting to talk about that project, signs for an Ames Street bank and the Cambridge Innovation Center Galaxy Park entry coming to 245 Main St.

Envision Cambridge Advisory Committee, 6 to 8 p.m. Wednesday. There will be a process update for this three-year citywide master planning effort, a review of draft recommendations and a discussion of next steps. (There’s also a meeting of the Envision Cambridge Housing Working Group from 6 to 8:30 p.m. Thursday in the fourth-floor conference room at the City Hall Annex, 344 Broadway, Mid-Cambridge.)

Is anything changing in plans for Inman Square?

Can 14 units be grandfathered to stay on Airbnb despite city law?

Board of Zoning Appeal, 7 to 11:30 p.m. Thursday. Among other business, a Wayland resident who owns homes at 42 Bay State Road and 277 Broadway is arguing to keep using their combined 14 units as short-term rentals through Airbnb despite new city laws because their use is grandfathered and he cannot register them under those new laws.