CRLS community surprised by Chromebooks: You’re not crazy, and district is sorry for error 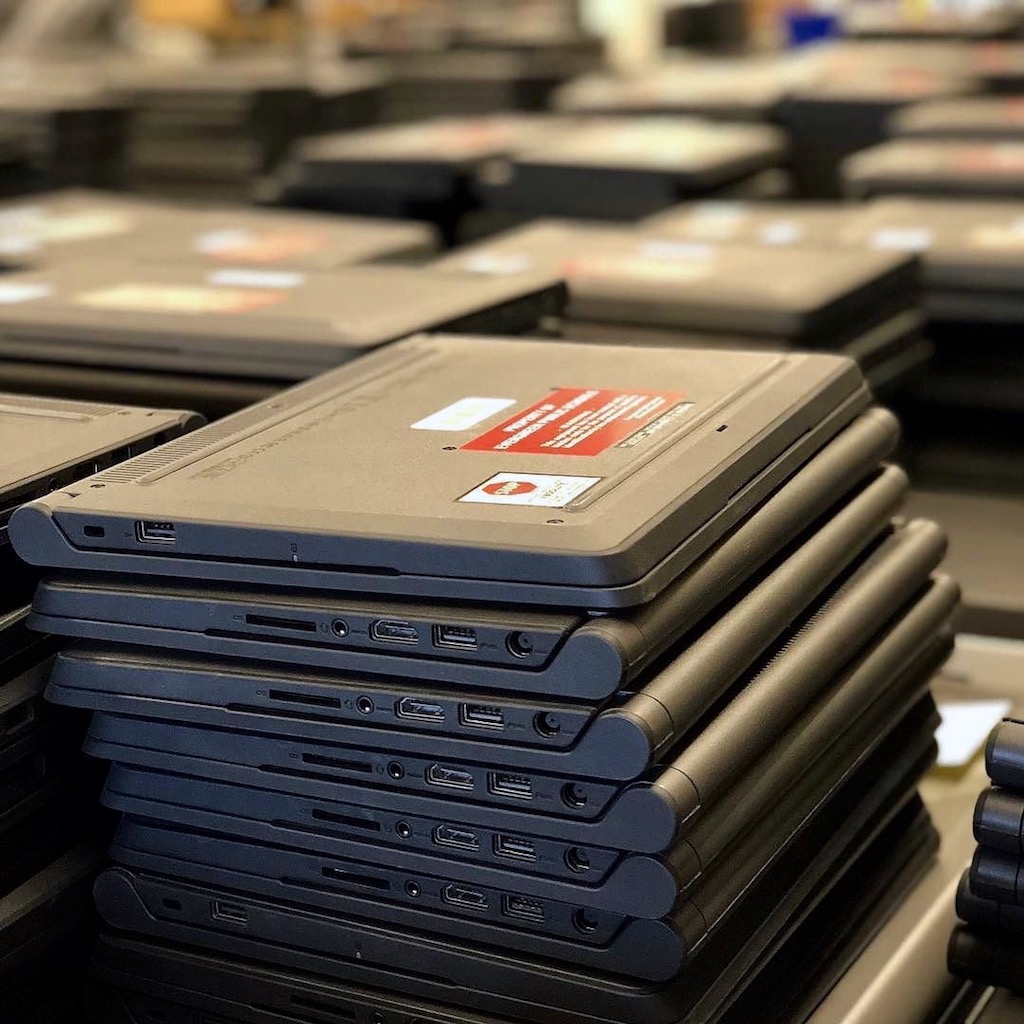 CRLS community surprised by Chromebooks: You’re not crazy, and district is sorry for error

Cambridge Public Schools isn’t the only district devoted to the online-only Chromebook. These laptops were headed to elementary school students in Vancouver, Washington, in December. (Photo: Evergreen Public Schools via Flickr)

The surprise decision to push Chromebooks to all grades at the high school this year, accelerating a widely described grade-by-grade rollout, returns to the School Committee at its Tuesday meeting, when officials might strike a more conciliatory tone than was heard Sept. 4.

“With hindsight being 20/20, it’s possible [we] could have been more specific about what the full implementation of a 1:1 model would mean,” said Superintendent Kenneth Salim in an emailed statement. “We sincerely regret any confusion, and hope that in future years, the expectations will be more clear.”

The Chromebooks, which can function only when online, rely on a specific set of Google software programs, store all files in Google’s cloud servers and block access to certain websites (including the commonly used video site YouTube), began their introduction to first-year students two years ago; late this summer juniors and seniors were told the “1:1” Cambridge Connect program would apply also to them.

Getting everyone on the same platform simplifies technology upgrades and troubleshooting, as well as eliminating inconsistencies among software and the ability to share documents and other work, but the district also feels it’s important for social justice purposes: It eliminates a distinction between students who might be able to afford a top-of-the-line Apple laptop, students who can afford a cheaper PC and students who can’t afford a computer at all. (Other school-owned computers kept on campus for various classes, ranging from Surface tablets to Macs, continue to be used, school officials said.) Committee member Laurance Kimbrough said the policy was important “in terms of dismantling white privilege.”

“We had significant discussion” 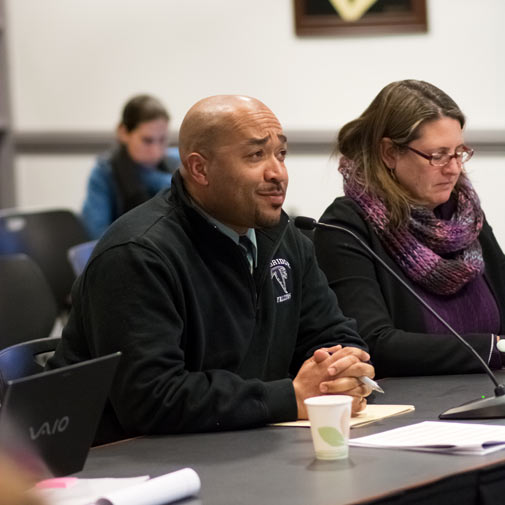 There were officials who argued during the Sept. 4 meeting that the policy to discourage outside devices was broadly known. Those insistences came after public comment from surprised students and parents, echoing conversation among parents online – and in response to a request to talk about the issue from committee member Patty Nolan saying the “question of whether existing CRLS students could use their own devices was not discussed.”

“I believe that we were talking about this throughout our school community, with our school councils, here and with our students last year about us moving to a one-to-one device area,” Smith told the committee. “I know that in the spring of 2017-18 we had significant discussion in our community about issuing of devices. Not everyone may have heard that message, or not everyone believed it was actually happening, but we do believe we had communications related to this is coming for our students in grades 11 and 12.”

Mayor Marc McGovern cited an August email from the district alerting families of the policy, which the district said would have referred to its emailed Did You Know Newsletter; that newsletter was sent Aug. 29, linking to a June 5 memo that listed Chromebook pickup times for all grades, but did not say students wouldn’t be able to use their own laptops in class. “Just because you’re hearing about it now doesn’t mean this was done behind closed doors or in secret. There have been a lot of meetings about this,” McGovern said.

Nolan was even criticized by fellow member Manikka Bowman for the late order, saying the way Nolan brought it forward was “reactionary,” assumed “thoughtful decision-making didn’t go into the process” and “creates an us-versus-them environment.” But Nolan reminded the meeting that the act of surprise and lack of clarity wasn’t on her end, but on the part of the high school and district.

“We have talked about this process for several years, and I was at every one of those meetings – it was never mentioned that students would not be able to use their laptops, and it was not mentioned that Wi-Fi wouldn’t be available,” Nolan said. “We need to walk the talk of student and family engagement.”

Even McGovern, who defended the rollout (“to say this is coming out of left field is not quite right … we can’t tell everyone every decision we make”) and said he wanted people to give the Chromebooks and Wi-Fi access rules more time before criticizing them, acknowledged room for improvement: “We can always do better in communication, I’m always saying that, and we should look at that and see where we dropped the ball.”

“If you are asking, when was it stated to students and families that the 1:1 implementation would affect public Wi-Fi access (improving it in some areas, no longer providing it in others), then the answer is, it was not proactively communicated. As explained previously, this decision was wrapped up with myriad decisions, and messaging about the program primarily focused on the distribution process and educational benefits of a 1:1 model.”

The provided links support comments by the superintendent, mayor and principal that the 1:1 program was communicated and publicized extensively, Rippey said, though “as communication manager, I personally regret that we did not think to include more explicit information about adjustments to Wi-Fi access farther in advance.”

“The program’s goals and structure were amply communicated, as we have documented,” Rippey said.

A history of the goals and timeline of technology improvements at CRLS is included this PDF, which contains the slides of a presentation made in June 2016 to CRLS faculty. (This was posted on our website, but only accessible to CPS staff).

The gradual transition to a 1:1 school utilizing Chromebooks was discussed at many School Committee meetings, and extensive professional development was provided to teachers over the course of several years, to prepare for the change. The school department considered the merits of a “Bring Your Own Device” versus a 1:1 technology initiative where devices would be provided for every student, and determined that a 1:1 model would be more successful for the classroom learning environment. The pilot year of this program and description of how it was explained to students was covered by the student newspaper, the Register Forum, in October 2017.

Other places that this information was shared include direct emails to families and email newsletters that are available to the public via our online newsletter archive or by signing up to receive it. In the Did You Know? Newsletter archive, if you click on the August and September issues from 2017,  you will see several stories that discuss the plan for 1:1 implementation over two years. The original CRLS Connects Web page, linked to from some of those stories also contains a description of the vision and implementation timeline.

In response to questions about spaces where Wi-Fi is provided, please note that is not correct to state that outside devices are not allowed in school, or that Wi-Fi is not accessible to personal devices at CRLS in public spaces.

In fact, in part due to student concerns about Wi-Fi quality in common areas of the school (as reported in Cambridge Day, for example), this past summer [brought] improvements to Wi-Fi available in common areas such as the cafeteria and school library. This Wi-Fi is open and public. The only thing that is not being supported with Internet access or technical support is the use of personal devices by students in classrooms during the school day.

The decision to not provide public Internet inside classrooms was wrapped up with the final details of a complex implementation process. While it is understandable that some students and families might not have fully realized they would be expected to use the Chromebook issued to them, the decision was made on the basis of educator training needs, the desire for coherent instructional design, the importance of providing adequate bandwidth to avoid educational disruption and the strong desire to de-emphasize differences in economic privilege between students within a supportive and excellence-focused school climate.

As stated by Principal Smith during the School Committee meeting, CRLS is committed to providing every student with appropriate technology to do their work. Students who require a different device, for instance for graphic design or certain types of computer programming, have access to high-quality technology furnished by [Cambridge Public Schools] within classrooms and labs. Students may use these technologies during those specialty classes as well as beyond the school day.

With hindsight being 20/20, it’s possible that CPS and CRLS could have been more specific about what the full implementation of a 1:1 model would mean for students who prefer to use a personal device. We sincerely regret any confusion, and hope that in future years, the expectations will be more clear.

At the same time, we appreciate the work of the many educators, administrators and staff who worked thoughtfully and diligently to bridge the digital divide while ushering in a higher standard of educational technology for the benefit of all students.