Students to use school-issued Chromebooks, officials shrugging off concerns over process 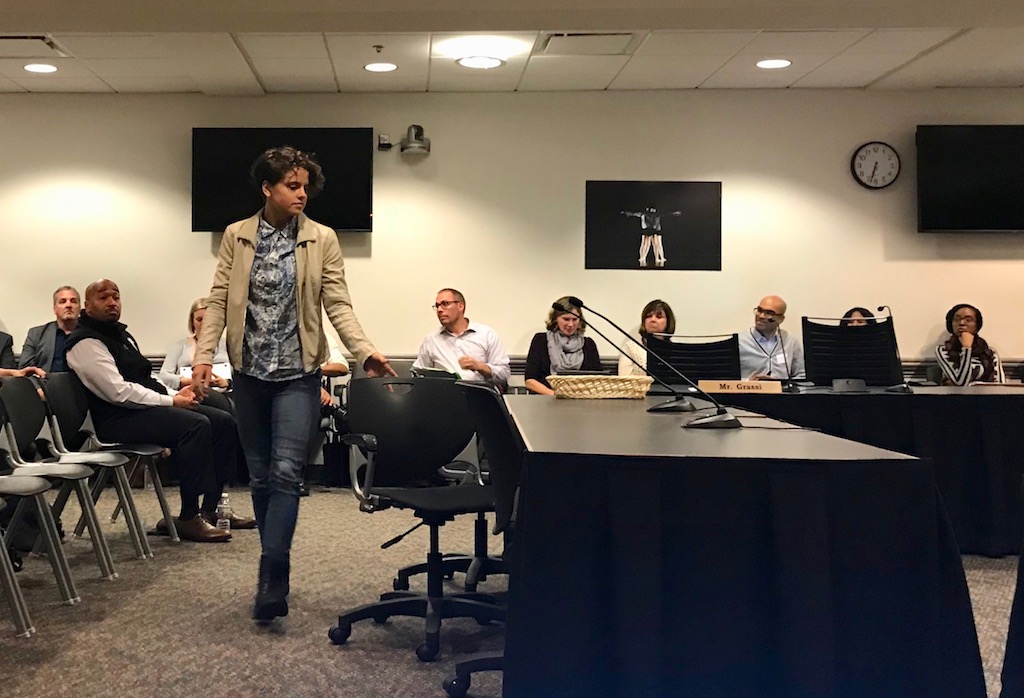 Students to use school-issued Chromebooks, officials shrugging off concerns over process

Issues of equity outweigh the lack of notice; complainers are reminded they could be thinking of transgender ballot question, court nominee
By Marc Levy

High school juniors and seniors saw their last chance to keep using personal laptops in class disappear Tuesday as School Committee member Patty Nolan withdrew a motion in their defense, saying she was convinced the public school district would continue to work to improve users’ experience with school-issued Chromebooks.

Part of that: The small furor over orders that those Internet-reliant devices would be the only computers allowed in class for all grades put attention on another school-imposed limitation – a complete ban on student use of the video site YouTube, which contains what the district calls “inappropriate content” – and brought a promise from Assistant Director for Educational Technology Gina Roughton that “we’re actively working on ways to modify that policy.”

Surprisingly little of the roughly two-hour conversation had anything to do with the substance of Nolan’s order, which was about older students’ use of personal laptops being barred without warning; in addition to lengthy arguments that the ban didn’t matter came claims that students should have been aware of it – yet also acknowledgements that the district could have communicated the change better.

There seems to be only a single sentence published by the district that can be pointed to as making the policy clear, and it’s buried in an FAQ page linked to from a page itself linked to from an emailed newsletter. The sentence, “Students will no longer be able to use their own device at school,” appears to be recent: A cache of the page from Aug. 6 includes the text; an Archive.org snapshot from late March shows a version when the rule applied only to first-year students. The district has been unable to show that the change was publicized.

Regardless, the battalion of information technology experts and computer science teachers assembled to address the committee at its second meeting on the laptop issue didn’t budge on Chromebooks being appropriate technologically (“we don’t see it as an inferior device” to full laptops, Roughton said), and Cambridge Rindge and Latin School principal Damon Smith remained adamant that it was essential for equity that every student have the same computer:

“Asking students to be in classes where we are giving some certain devices while others are able to bring in devices of their own choosing furthers that divide in our community, that stigma that ‘This is okay for some students, it’s not okay for everyone. And it’s okay for students who need help to have this device,’ but everyone else who can buy – even in the language we used here today – a ‘superior’ or a ‘better’ product stigmatizes those students even further.”

“The equity is not in the devices we give. The equity is in [saying] to young people that we can all be successful and thrive with this technology,” Smith said.

Several parents and educators spoke during public comment to endorse the Chromebooks as a path to equity for Cambridge’s students from lower-income families, while the students who spoke expressed dismay over what they would be asked to do with them. “The Chromebooks don’t really fulfill the needs of a lot of classes,” Kalinda Miller said, while junior Zoe Padilla remarked on the device’s “slow speed.”

But with Mayor Marc McGovern soon summing up that the switch to Chromebooks simply meant that “people with privileges might be inconvenienced a bit,” the tone in the room tilted even more dramatically away from the issues of how well technology was serving students attending the high school.

Committee member Laurance Kimbrough suggested students’ attention on their own educational needs was short-sighted compared with all they and their parents could be thinking about:

“In November, we have a very important question coming up on the ballot [about protecting transgender people in public spaces]; we have not received any emails from students or parents about how as a committee or school department we could be addressing that issue. We have a potential member of the Supreme Court who … has been charged with three different accounts of sexual assault; we have not received any emails from students, we have not received any emails from parents about what we are doing at CRLS and within our Cambridge community to support men who want to address sexism and think of a different path forward about how to sort of address and hold other men accountable for sexual assault. Recently we had a poster that was taken down by someone at the high school in support of the [Black Student Union]. There are myriad issues that you can take on as a student right now with us as a committee that we’ll be more than happy to address and support that are impacting our democracy right now. And I have to believe that all of us as citizens want to address those specific concerns and feel like education is a really valuable way to address those concerns. I would ask all of you who are students … to be thinking critically about how education can be used to address the most important issues that are impacting our society moving forward, which I want to say firmly that I don’t think Chromebooks are.”

Kathleen Kelly, vice chairwoman of the School Committee, seconded that:

“I just want to thank Laurance for his advocacy around these issues and his encouragement for students to step forward and advocate around it, and I want to say in particular because I have a family member who is transgender and is very concerned about how that referendum is going to turn out and I know a number of other people who are concerned about that. Also, the issue around a Supreme Court member and how that has affected women and women’s lives, I appreciate that because these are deep issues in our society and it affected all of us one way or another. Thank you. Thank you very much.”

It was shortly after this that Nolan reminded the meeting that her unfinished business from the Sept. 4 meeting had to do with “a very specific issue” of juniors and seniors being taken by surprise by the Chromebook-only order with the hopes that, because the issue had never been discussed, their classes’ use of outside devices could be grandfathered in – a request made explicitly by student speaker Olivia Shirley. “Again, I stand corrected if that was publicly discussed. I don’t remember it, I reviewed my files and found no reference to that point. Parents and students who’ve communicated also indicated they had no understanding of this through the summer. I’ve also heard that from some teachers,” Nolan said, “It would be helpful to have the references to that very specific point.”

It would seem to have been answered already – two rounds of requests for memos and documents made to the district between the two September meetings to show how the information was disseminated produced nothing specific, but did bring admissions of regret from Superintendent Kenneth Salim (“In hindsight, it is true we didn’t call specific attention to the fact that the 1:1 would bring the expectation all students would be using [Chromebooks],” he reiterated Tuesday) and district communications manager Rosalie F. Rippey (“the answer is, it was not proactively communicated … as communication manager, I personally regret that we did not think to include more explicit information”).

Smith, though, circled back around to an administration stance similar to what has said Sept. 4 that suggested the Chromebook-only policy had been communicated for juniors and seniors as well as for younger students: “To correct the record, from my perspective, I understand what committee member Nolan said about there being no conversation, and I record at least four opportunities where I have been before this body,” Smith said, “where we spoke explicitly about district-issued devices; we talked about economic disparity and the instructional burden on teachers; and about privacy and security.”

“There has been significant conversation,” Smith said. “There can always be improved conversation, but to leave on the record that my administration and the people sitting next to me did not have communication with other members of the community about 1:1 being all devices being school-issued devices is incorrect, and I want it corrected and known … we communicated as a school administration.”

With Nolan’s request for specifics unfulfilled and a statement at odds with those of Rippey and Salim, another effort was made as Smith left the meeting. He sounded less certain: “I think we sent that messaging to our families at the beginning of the summertime. I feel like we – I’d have to look through all the communication, through our DYK [newsletter] archives,” Smith said.

“I think over a three-year span, if we were to look back, I’m not sure, but I imagine we’ve had communication with families about going 1:1. And I think there is some confusion that everyone at school [would be affected],” he said.

He pointed correctly to the FAQ page as containing the information juniors and seniors would want to know. “Did we refer people to that particular page directly? That did not happen,” he said. “But we’ve had that site up for the last two and a half, three years.”