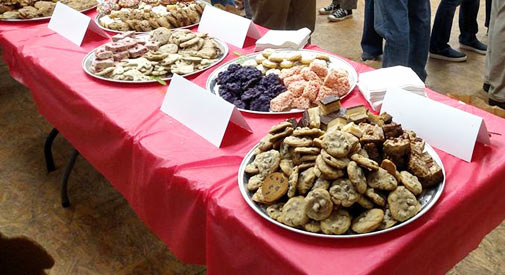 “Monstress” creator Marjorie Liu from 7 to 8:30 p.m. at The Harvard Coop, 1400 Massachusetts Ave., Harvard Square. Free, but registration is encouraged. Liu, author of more than 19 novels and a teacher of comic book writing at the Massachusetts Institute of Technology, is the first woman to win an Eisner Award in its 30 years of existence. She’ll discuss her ground-breaking “Monstress” series and sign works. Information is here.

The Big Quiz Thing from 7:30 to 9:30 p.m. at the Museum of Science, 1 Science Park, Boston, on the Cambridge border. Tickets are $10 in advance or $12 the day of for this 18-plus event. A team-based game show in the Charles Hayden Planetarium hosted by quizmaster Wes Hazard, with video and audio trivia puzzles that are playable by smartphone – with Smart-Ass Points available for wrong but funny answers. Information is here.

The Moth: Dues from 8 to 11 p.m. at Once Lounge + Ballroom, 156 Highland Ave., Somerville. Tickets are $10. Five-minute true story about paying your dues: long hours, horrible conditions, the low wages and abuse that earns you the golden ticket at work, school or in romance. Information is here.

Director Bryan Newton (“Rick and Morty,” “Teen Titans Go!”) from 7 to 10 p.m. at The Center for Arts at the Armory, 191 Highland Ave., Somerville. Tickets are $12.50, benefiting barcc.org, which works to end sexual violence and help survivors of sexual violence. After storyboarding and directing animated television, Newton is brought to town by AniMAtic Boston for a night to talk shop and dish about working on all three seasons of Emmy-winning “Rick and Morty,” where he helped develop the pilot and is working on Season 4. Information is here.

Armory Pub Sing from 7 to 9:30 p.m. at The Center for Arts at the Armory, 191 Highland Ave., Somerville. Free. This event is based on a traditional English pub sing and encourages chorus-based songs that are easy to learn and fun to do as a group. Information is here.

Weird Local Film Festival #6 from 7 to 11 p.m. at Warehouse XI, 11 Sanborn Court, Union Square, Somerville. Free, with a suggested donation of $5 for this 18-plus event. Expect 17 short films (with intermission) with titles ranging from “Manicorn,” “Kneaded Courage” and “Dead Body.” Information is here.

“Unveiled” one-woman play from 7 to 9 p.m. (doors at 6:30 p.m.) including a talkback with the artist at Fitzgerald Auditorium, 459 Broadway, Mid-Cambridge. Free, but register here to attend; recommended for ages 13-plus. Artist Rohina Malik portrays five Muslim women in a post-9/11 world serving tea and uncovering what lies beneath the veil, exploring about racism, hate crimes, love, Islam, culture, language and life. Malik was called a “remarkable new theatrical voice” by the Chicago Tribune for her work on “Unveiled.” Information is here.

Mortified Boston: Gawktober from 7 to 9 p.m. at Oberon, 2 Arrow St., Harvard Square. Tickets are $15 for this 21-plus event. Adults share their most embarrassing teen diaries, poems, short films and other artifacts of a time most of us would like to forget. Featuring house band The Catalanos. Information is here.

The last Dire Literary Series reading from 7 to 9 p.m. at The Center for Arts at the Armory, 191 Highland Ave., Somerville. Curator Timothy Gager ends his 18-year-old monthly reading series with an expanded roster of seven readers – Rusty Barnes, Nadine Darling, Amy Dresner, Elizabeth Graver, Doug Holder, Hannah Larrabee and Renuka Raghavan (pictured) – instead of the usual three, expanding into two rooms that will be visited by each author. “We are ready to rock to the end,” Gager says. Information is here.

“Hamlet” in the Loeb Ex from 8 to 10 p.m. in the Loeb Experimental Theater, 64 Brattle St., Harvard Square. Tickets are free by filling out this form. A modern rendition of Shakespeare’s tragedy with a cast of seven navigating their way through through an Elsinore of projections, music and digital media in “a daring approach designed to move, shock and challenge its audience.” Information is here.

Bach Prisms from 8 to 10 p.m. at Harvard-Epworth United Methodist Church, 1555 Massachusetts Ave., Harvard Square. General admission is $25 (or $26.87 with fees). The Sarasa Chamber Music Ensemble opens its 20th anniversary season with a performance of Bach’s “Art of Fugue,” which he was working on toward the end of his life and never completed, interspersed with short works by 20th century composers. Players include Rodolfo Richter and Rebecca Huber on violin; Jenny Stirling on viola; and Jennifer Morsches on cello. Information is here.

Mortified Boston: Gawktober from 7 to 9 p.m. at Oberon, 2 Arrow St., Harvard Square. Tickets are $15 for this 21-plus event. Information is here.

Central Square Food Truck Festival from 11 a.m. to 5 p.m. at University Park Commons, in Cambridgeport near Central Square. Free. More than 30 food trucks selling everything from grilled cheese to whoopie pies will be among the Flea’s usual roster of food trucks, beer and more than 90 funky vendors. A Lamplighter Beer garden will be set up as well. Information is here.

SomerStreets: Monster Mashed Up from 2 to 6 p.m. on Somerville Avenue from Union Square to Park Street Free. There’s a Halloween theme for Somerville’s latest take on the international Open Streets concept, which closes busy city streets to vehicles and opens them up for cycling, walking, dancing, running and other activities. Activities include a costume parade starting at 3 p.m. and open to all, costume contests with prizes (including one for dogs), giant chainsaw pumpkin carving, cemetery tours, face painting and henna designs, as well as wrestling matches with the Boston League of Women Wrestlers, a parkour and a stilting workshop, along with a beer garden and plenty of live music. Information is here.

The Comicazi Cookie Clash charity baking competition from 4 to 6 p.m. at Comicazi, 407 Highland Ave., Davis Square, Somerville. $10, or $5 for children under 10, gets unlimited homemade cookies, milk and coffee – and the 1966 Batmobile, rescheduled from LadiesCon. Proceeds from this event benefit Boston Partners in Education, a local nonprofit supporting Boston Public Schools students. Information is here.

Hallowe’en Adult Folktale Telling from 7 to 9 p.m. at at The Center for Arts at the Armory, 191 Highland Ave., Somerville. Free, but for people 18-plus. Uncensored traditional tales of terror and stories of the supernatural, starting with an open mic at 7 p.m., followed by featured teller Doria Hughes for a program of scary legends and folktales from ancient Greece, China and Great Britain. Information is here.

“Hamlet” in the Loeb Ex from 8 to 10 p.m. in the Loeb Experimental Theater, 64 Brattle St., Harvard Square. Tickets are free by filling out this form. Information is here.