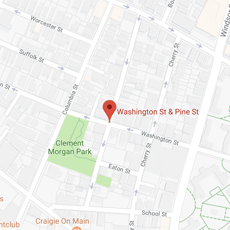 The peace resulting from a summertime surge of law enforcement in The Port neighborhood ended late Tuesday with a nonfatal shooting, police said.

A 19-year old Cambridge man sustained non-life threatening injuries when he was shot several times in the leg at 10:58 p.m. after an argument, drawing officers to Pine and Washington streets.

Multiple men reportedly were seen running from the area.

The victim was taken to a local hospital, where he is being treated, said Jeremy Warnick, director of communications and media relations for Cambridge police.

An investigation “remains active and ongoing” and an increased police presence has been deployed, Warnick said.

The previous gunfire incident in The Port was Aug. 16. There had been 10 gunfire incidents in the city this year – most in The Port, taking place in early morning hours and resulting in no victims – before city councillors asked police June 18 to assemble a task force to address the problem. The task force cut reports of shots fired by 78 percent from its start June 19 to its disbanding Sept. 1, along with making 46 arrests and issuing more than 200 warnings for illegal behaviors such as drug possession, causing “significant disruption to drug markets,” the City Council learned last month.