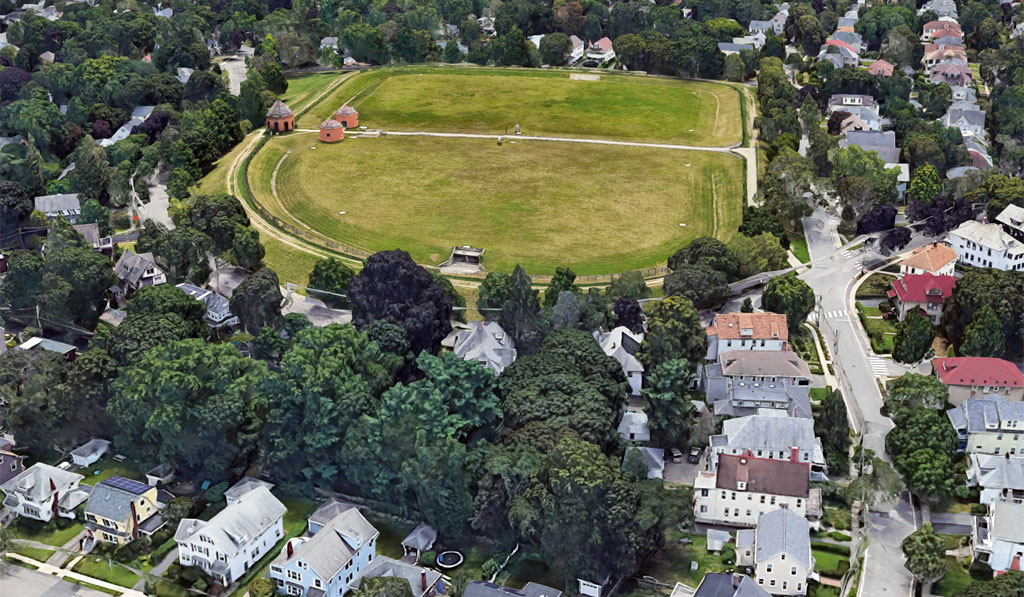 Cambridge water runs from the water treatment plant at Fresh Pond to a water tower in Payson Park in Belmont before it returns to Cambridge. (Photo: Google)

The water transmission lines that were being considered as a candidate for the controversial repair technology known as cured-in-place plastic are in fine shape and don’t need that kind of extensive renovation, a consultant has told city Water Department officials.

The two 40-inch steel pipes carry treated water from the water treatment plant at Fresh Pond to a water tower in Payson Park in Belmont, and return it to Cambridge, where it is distributed to customers. Belmont is the highest point in the water system; water is pumped up to the tower and flows back to customers by gravity.

The preliminary report by consultant CDM Smith was discussed at this month’s meeting of the water board, held Tuesday. Examination at two locations showed that “generally speaking, the pipe wall is really good,” director of engineering and distribution operations Mark Gallagher told board members. “It hasn’t changed much in 20 years [when the previous assessment occurred], or since it was put in.”

Other testing also produced good news: There are no leaks, Gallagher said. But there were two problems, he said. A system that uses electric current to protect the pipe from corroding needs repair; and in a few spots, workers found bits of cement lining that had detached and were floating in the water. The city installed the lining in the 1950s, Gallagher said.

CDM Smith is recommending that the city “upgrade” the electric protection system, he said. Workers will also try to find out where the cement lining is breaking off the pipe interior, Gallagher said.

Board members asked when the pipes should be inspected again. “A 20-year assessment seems reasonable,” Gallagher said.

The city is going ahead with a study of the plastic piping despite the good news, Water Department managing director Sam Corda said. Difficult construction conditions may make CIPP an option for small sections of pipe, he said, and City Manager Louis A. DePasquale has promised to assess health and other impacts before deciding to use the technology.

Before the public furor over CIPP began last year, the city had used the method to repair 900 feet of pipe on Main Street in 2014. Officials said the proximity of the MBTA red line subway made conventional repairs almost impossible.

CIPP, introduced in the 1970s, entails inserting a flexible thin plastic tube into the pipe, then using heat to expand it into a lining. It doesn’t require workers to dig up pipes to repair them, making it attractive. It was used mostly to repair sewer and waste pipes originally; more recently, the method is being used in drinking water pipes.

That has led to questions from scientists and residents about whether chemicals leaching from the lining are safe for human health. The city has hired CDM Smith – the same consultant examining the condition of the Belmont transmission pipe – to look into the types of materials used in the plastic piping method and their qualities. CDM Smith is also gathering information on discharges from the lining into water. Cambridge environmental health director Sam Lipson will use CDM’s findings to analyze the risks and benefits of using CIPP.

Officials had planned to present a preliminary report at the November meeting of the Water Board, but that has been postponed to the next meeting, on Dec. 11, because Lipson won’t be available in November, Corda said.

This story was published Dec. 24, 2018, and postdated to Oct. 18, 2018, to fit into proper chronological order; an editorial oversight had left the filed story unpublished.