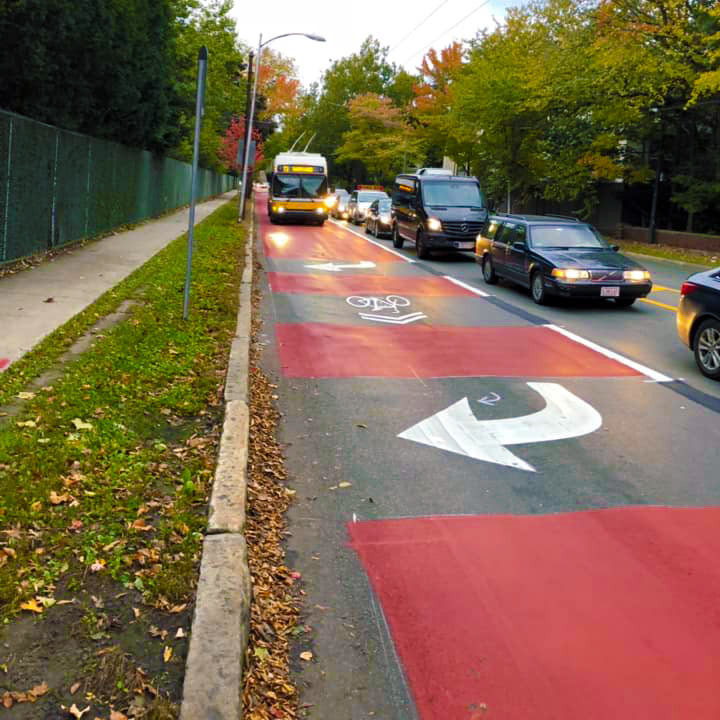 The first dedicated bus lane this side of the Charles launched Friday, a pilot program in collaboration with Watertown designed to give MBTA buses and local business shuttles priority over cars along the normally sluggish Mount Auburn Street corridor.

A project study revealed that cars represented 97 percent of road traffic and buses just 3 percent – yet those public vehicles carry nearly 60 percent of all commuters along the corridor. Now those bus riders get an austere, red-striped lane that cars are barred from using, though like for bus lanes used by the Silver Line in Chinatown, bicycles are allowed, neatly increasing bike infrastructure in the most bike-unfriendly stretch of Mount Auburn Street.

Because it’s a pilot, the one-mile stretch between the Fresh Pond fork by Mount Auburn Hospital and Cottage Street in Watertown (just beyond Greg’s Restaurant, 821 Mount Auburn St.) had to use low structural impact materials such as paint and signs, but also tweaked traffic light timing so approaching buses would get a longer green than private cars. 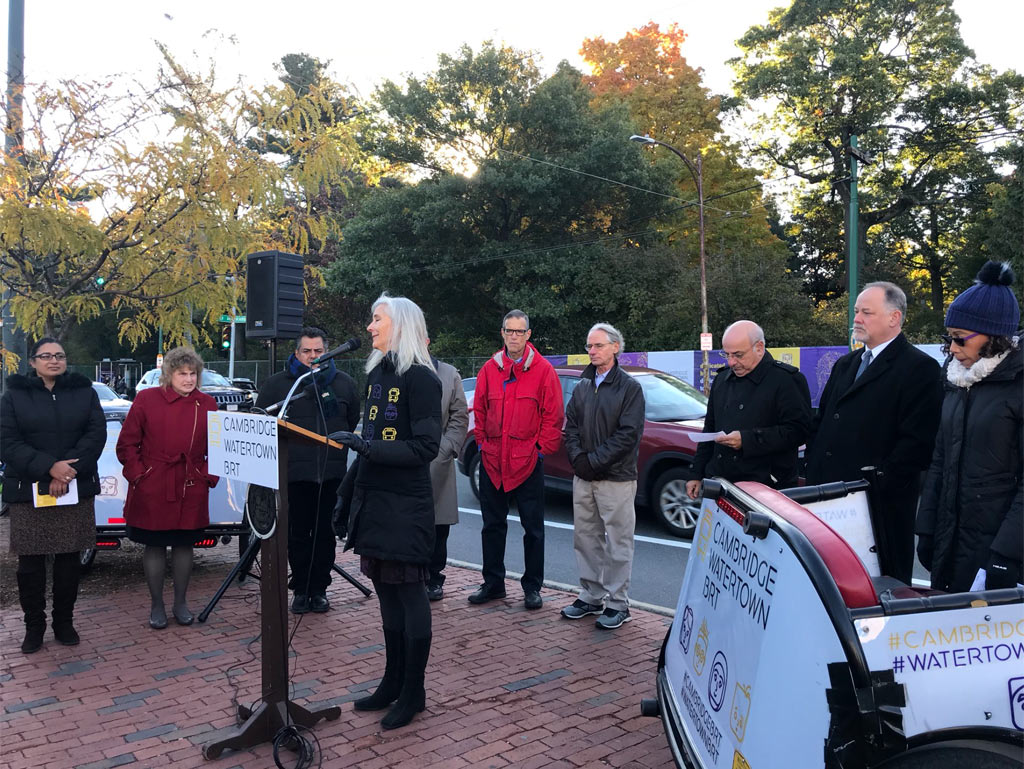 The project was made possible through a community grant from the Barr Foundation, working with the Institute for Transportation and Development Policy. Tegin Teich, a transportation planner at Cambridge’s Community Development Department and project manager for the bus priority lane, noted the “impressive coordination across agencies and two municipalities” that included not just the MBTA, but the state’s Department of Conservation and Recreation.

The next steps will be collecting data to review; more bus rapid transit red lanes might follow – something “essential,” Teich said, as the city expands.

“We are watching the new bus lane rollout closely,” said state Sen. Will Brownsberger on Facebook. His Second Suffolk and Middlesex District includes Watertown as well as Belmont, Brighton, the Fenway and Boston’s Back Bay. “The Mount Auburn buses are reporting great improvements. Auto drivers are not as happy. We are working to improve the overall throughput for drivers too. We are in a shakeout period.”

Similar transit and safety improvements, including a separated bike lane, are planned for the lower end of Massachusetts Avenue by the Massachusetts Institute of Technology this month. A daytime bus priority lane is also planned for the redesigned Inman Square; the idea has been explored by city councillors for Pearl Street at Central Square and requested by bicyclists for Porter Square.