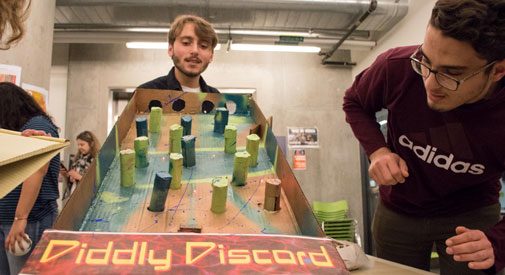 Come Play! Cardboard Arcade Games reception from 6 to 8 p.m. at Gallery 344, on the second floor of City Hall Annex, 344 Broadway, Mid-Cambridge. Free. An arcade of all-cardboard games for visitors to play, from navigating a maze to a battleship battle to an interstellar raid, developed by students at Lesley Art + Design. Information is here.

“The Grand Bizarre” film at 7 p.m. at The Brattle Theatre, 40 Brattle St., Harvard Square.  General admission is $12. The DocYard kicks off its spring season at The Brattle with “Grand Bizarre” (2018) by Jodie Mack. The film, something of a collage, is described as “a postcard from an imploded society … bringing mundane objects to life to interpret place through materials.” Mack, who will be in attendance, teaches at Dartmouth but has been in town for two years of Harvard fellowship – her most recent short, “Hoarders without Borders 1.0,” was filmed at the Harvard’s Mineralogical & Geological Museum. Joining Mack in conversation will be Ruth Lingford, who teaches film/video and animation at Harvard. Information is here. (Contributed by Tom Meek.)

“Joe Wong: Chinese/American: A One-Man Show” from 7 to 8:15 p.m. and 9 to 10:15 p.m. at ImprovBoston, 40 Prospect St., Central Square. General admission is $20. Wong went from local open mics to spots with Letterman, Ellen and Colbert, and is hugely popular in China, where he hosts the nation’s “Mythbusters” show (called “Is It True?”) and has more shows in development, including in the United States. The modest, much-liked and very funny Wong is doing the final half of a four-show run. Information is here.

Dessert & Conversation with author Morgan Jerkins from 6 to 8 p.m. at Lesley University, 31 Everett St., in the Agassiz neighborhood. General admission is $30. The author of “This Will Be My Undoing: Living at the Intersection of Black, Female, and Feminist in (White) America,” reads, signs and hangs around for cocktails and desserts from Flour Bakery+Cafe; Basil Tree Catering; Violette Gluten-Free; 7ate9 Bakery; Wholesome Fresh; Seacoast Sweets; FoMu – Alternative Ice Cream & Cafe; and Jules Catering. Information is here.

Sweet Social in the Square from 6:30 to 9 p.m. at La Fabrica Central, 450 Massachusetts Ave., Central Square. Advance sales of single admission of $40 and couples admission of $70 have ended; door admission policy hasn’t been stated. This fundraiser for the Margaret Fuller Neighborhood House includes music from DJ Lady Ly and the Phillip Young Trio, a celebrity couples trivia contest, photobomb contest and a Cupid’s Raffle. Information is here.

No-romance open mic and Lovers vs. Leavers at the Boston Poetry Slam from 7:15 to 11:55 p.m. at The Cantab Lounge, 738 Massachusetts Ave., Central Square. There’s a $3 cover for this 18-plus show that starts an open mic allowing any topic except romance, followed by a head-to-head poetry slam between a team of Lovers and a team of Leavers. Information is here.

Galentine’s Day party at 7:30 at Once Lounge + Ballroom, 156 Highland Ave., Somerville. Admission is free to this 21-plus event. On a day for “ladies celebrating ladies,” Once hosts a  market of lady-friendly and female-owned vendors selling jewelry, clothing, candles and self-care; there’s a taco bar and Bantam Cider tasting; a photo booth, glitter makeup artist and tarot card readers; and it culminates with karaoke at 9:15 p.m. Information is here.

St. Valentine’s Day Laughssacre from 8 to 9:30 p.m. at The Middle East Downstairs, 480 Massachusetts Ave., Central Square. Ticket are $10 in advance or $14 at the door for this 18-plus show. Comedy with headliner Tim McIntire and featured comics Sara Marie; Matt Barry; Emily Ruskowski; Daniel Gilbert; Chris Dimitrakopoulos; and Alan Richardson, with special guests Cris Machado and Will Martin. Information is here.

“Trials of Love” with Mike Dorval from 8 to 10 p.m. at The Comedy Studio, 1 Bow Market Way, Union Square, Somerville. Tickets are $15. More comedy for Valentine’s Day? Yes and yes. Comic Dorval brings in a couple with relationship conflicts to work through the issues onstage, aided by his own insight and the help of audience members, and there’s relationship-themed standup comedy from Brian Higginbottom; Emily Ruskowski (she’s everywhere tonight); Arty P; Emmett DeLaney; Valeria Dikovitskaya; and Alex La. Information is here.

Bugs Bunny Film Festival at 4, 6 and 8 p.m. (and continuing through Feb. 23) at The Brattle Theatre, 40 Brattle St., Harvard Square. The annual school vacation program of classic Warner Bros. cartoons is different from in years past – this time all the Looney Tunes characters share the screen instead of being broken up into different shows, though all are still projected in 35mm. Event information is here.

“Evacuated!” and “Balls of Yarns” storytelling from 7 to 8 p.m. and 8:30 to 9:30 p.m. (and repeating Saturday) at Lilypad, 1353 Cambridge St., Inman Square. General admission to one show is $25, and to the double-feature is $40. Erika Kate MacDonald tells the true story of her evacuation from Indonesia amid the economic collapse and political unrest of the late 1990s. The Edmonton Journal’s Dave Breakenridge says it has “the feel of actor Spalding Gray’s ‘Swimming to Cambodia,’ if Gray had been a foreign exchange student who was big on the Spice Girls.” Meanwhile, in “Balls of Yarns,” Paul Strickland takes listeners to “a strange town where creaky doors sing with you, libraries are separate from ‘truth-braries’ and extraordinary stories are shared through yarn and tin can” – but a lurking evil threatens to make things normal. Information is here.

“How to Go On” from 7 to 9 p.m. at Sanders Theatre, 45 Quincy St., near Harvard Square. General admission is $15 in advance, $20 at the door. The Harvard-Radcliffe Collegium Musicum presents the East Coast premiere of a secular requiem by Dale Trumbore with poetry by three contemporary female poets, all answering a question about grieving and healing posed by poet Barbara Crooker: “How can we go on, knowing the end of the story?” Also on the bill: “Sestina – Lagrime d’Amante al Sepolcro dell’Amata” by Claudio Monteverdi and “Messa di Requiem” by Ildebrando Pizzetti. Information is here.

Ayesha Jordan’s “Line by Line” from 8 to 10 p.m. at the Massachusetts Institute of Technology’s W97 Theater, 345 Vassar St., Area II. Free, but register here. Multidisciplinary artist Jordan seeks people to be part of a music video experience – meaning it’ll be filmed and may be broadcast – with glamazon hiphop icon (and Jordan alter ego) Shasta Geaux Pop, whose “Line by Line” is a work-in-progress performance event incorporating sounds inspired by creole music culture, zydeco and New Orleans bounce. Information is here.

Pizza Pi Valenslimes 2019 from 6 to 10 p.m. at Pizza Pi Press, 64 Vinal Ave. No. 6, Somerville. There is a suggested donation of $5 to $10, with all money going to pay the artists, but no one will be turned away for lack of funds. Poet R. Lynn, illustrator Danielle Maio and musician Puppy Problems provide watchable entertainment, but the party includes all sorts of things that might sound about right for a celebration of middle-school crushes: interactive art-making (such as cootie catchers), pizza and pizza grease divination from experts, assorted beverages, maybe a burn book, “M.A.S.H,” stuff for sale – and of course the company of like-minded people who are In Love With Love. Information is here.

Don’t Tell Cambridge comedy at 7:30 p.m. at a location to be emailed on the day of the show to buyers of tickets starting at $20 for general admission. Secret locations for secret comedians (and you BYOB) in what organizers call “comedy’s worst-kept secret.” Information is here.

“The Book of Water” and “The Book of Fire” musical performance from 8 to 9:30 p.m. at the Longy School of Music’s Edward M. Pickman Hall, 27 Garden St., Harvard Square. Free. Eric Hofbauer performs his long-form compositions – a suite for jazz sextet and a five-part suite for guitar, bass, turntables and samples inspired by the writings and speeches of James Baldwin, featuring Tony Leva on bass and turntables. Information is here.

Spiders Canvas/Arachnodrone from 9 to 10 p.m. (and repeating Sunday and Monday) at the Massachusetts Institute of Technology’s 345 Vassar St., Area II. General admission is $10 (with fees, $12.24). The U.S. premiere of an immersive, synesthestic piece of performance and installation art that allows audience members to experience “life in the web” – one spun by a Cyrtophora citricola spider and scanned and reproduced as a virtual 3D analog with each strand “tuned” to a different note, producing an ever-changing musical experience as the web is traveled. We’re probably not explaining the work very well, so you’ll just have to see it for yourself. Information is here.

American Classics Presents “Songs from After the War” from 3 to 5 p.m. at the Longy School of Music, 27 Garden St., Harvard Square. General admission is $25. Music by Irving Berlin, Jerome Kern and some vaudeville favorites – “How Ya Gonna Keep ’Em Down on the Farm (After They’ve Seen Paree),” “You’d Be Surprised,” “Yes! We Have No Bananas,” “Swanee” and more – are in this American Classics survey of the euphoric (and occasionally silly) first few years after Armistice Day, performed by with Bradford Conner; Jean Danton; Michelle DeLuise; Dan Prior; and Benjamin Sears. Information is here.

Art Meets Fashion from 8 p.m. to 2 a.m. at Warehouse XI, 11 Sanborn Court, Union Square, Somerville. General admission is $25 (with fees, $28.16) for this 18-plus show, online only. Some wine and fine art, a bit of spoken word and then live runway from local fashion designers, ending with musical performances for a look at the work of more than 20 artists and performers. Information is here.

Spiders Canvas/Arachnodrone from 3 to 4 p.m. (and repeating Sunday and Monday) at the Massachusetts Institute of Technology’s 345 Vassar St., Area II. General admission is $10 (with fees, $12.24). Information is here.