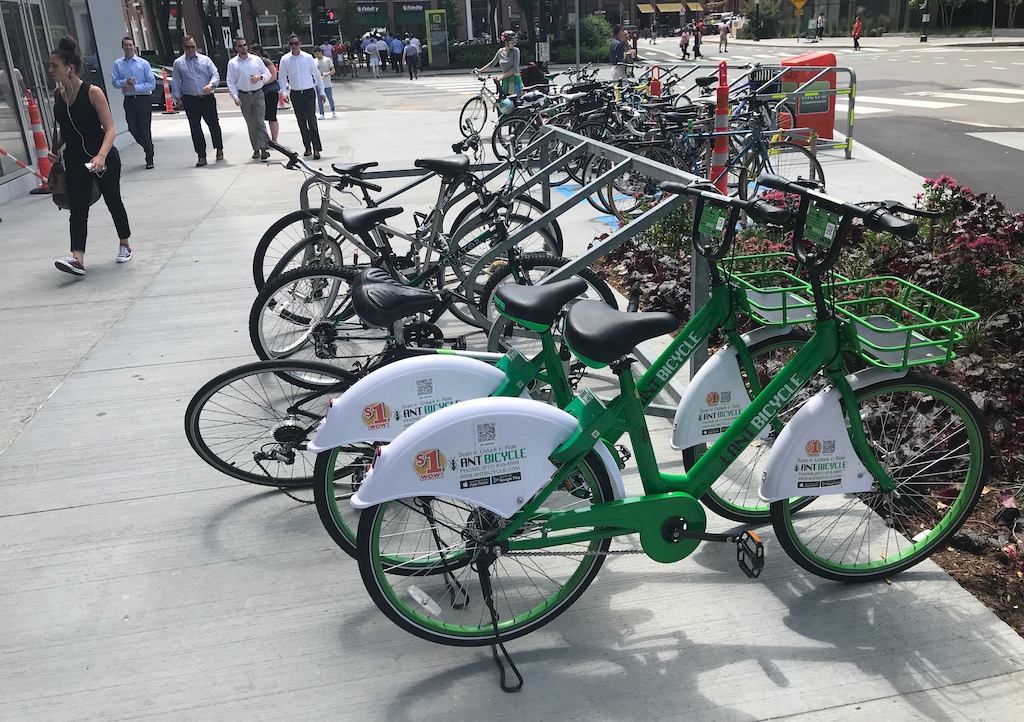 Ant Bicycles, which can be unlocked and rented with an app, in Kendall Square in July 2018. They are among “micromobility” offerings that can now be found throughout the city. (Photo: Marc Levy)

The local micromobility industry is climbing aboard a proposal to get Kendall Square’s federal transportation agency involved in figuring out the future of bikes, scooters and other, so-far undreamed-of ways of getting from one place to another within the city.

The idea, pitched Monday by councillor Craig Kelley and adopted without debate by the City Council, asks the City Manager’s Office to seek the help of experts at the Volpe National Transportation Systems Center – a research center based in Cambridge since 1970, since President Richard Nixon decided to shut down a short-lived NASA branch the previous year.

Volpe “is uniquely situated and staffed to help Cambridge set up a well-crafted pilot program to explore regulatory programs for micromobility platforms, ranging from parking to street use to enforcement and more,” Kelley said in his order. 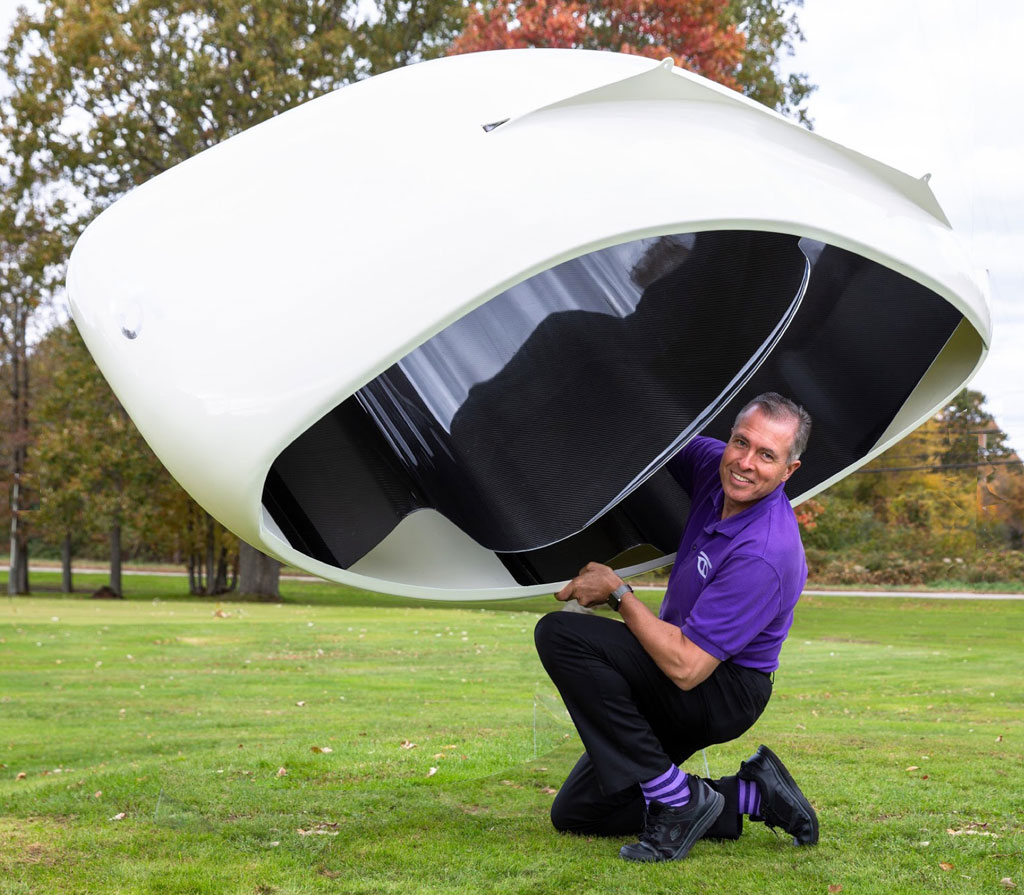 Mike Stanley had been expecting an official hearing for his lightweight Transit X pods, which would ride on elevated rails throughout Cambridge. (Photo: Transit X)

Kelley has had a long-standing interest in the future of transportation and technology in general, especially where it threatens to outpace the law, and has kept a watchful eye on the small vehicles that get located and unlocked with smartphones, then left wherever the user decides to climb off. It’s been that tendency – for the devices to be left carelessly, sometimes blocking sidewalks – that has alarmed officials already taken by surprise by industry-shaking ride-sharing companies such as Lyft and Uber, as well as by technologies such as Airbnb that can unsettle both neighborhoods and a local economy.

“We are going to, I think, get slammed by a very local expansion of things that are neither bikes nor cars but have significant safety and utility implications for both of those modes of transit, and for pedestrians and others as well. It’s sort of like AirBnB and Uber on two wheels,” Kelley said.

On Monday, micromobility companies said they too had concerns.

“We believe scooters are a viable mode of transportation that can really change how we move through cities,” said Mike DiGangi, a founder of BeeScoot, which has offices on Chauncey Street  near Harvard Square. “If not done properly, in cooperation with cities, scooter sharing can become disruptive, chaotic and eventually unsafe. We really want to push for Cambridge to look at doing a pilot program and integrating this into your current modes of transportation.”

Similarly, Sneha Chitte offered Kelley’s pilot program the help of her company, Superpedestrian, based on Hamilton Street in Cambridgeport, which envisions fleets of electric scooters and bikes powered by “Copenhagen Wheel” technology.

Kelley had previously expressed interest in exploring the feasibility of hosting a Transit X system – which would install overhead lines holding lightweight pods created and tested so far in Leominster, in Central Massachusetts. But on Jan. 14 he withdrew his own order suggesting a committee hearing on Transit X, calling it a matter of priorities.

“With so much on the micromobility plate that isn’t, I don’t think, getting enough attention … I became worried that we might be getting too excited about something that is not yet really proven,” Kelley said. “The idea [of Transit X] is certainly very intriguing, but I didn’t see it getting enough traction here in Cambridge right now to warrant staff time with so many other micromobility things that seem more pressing.” 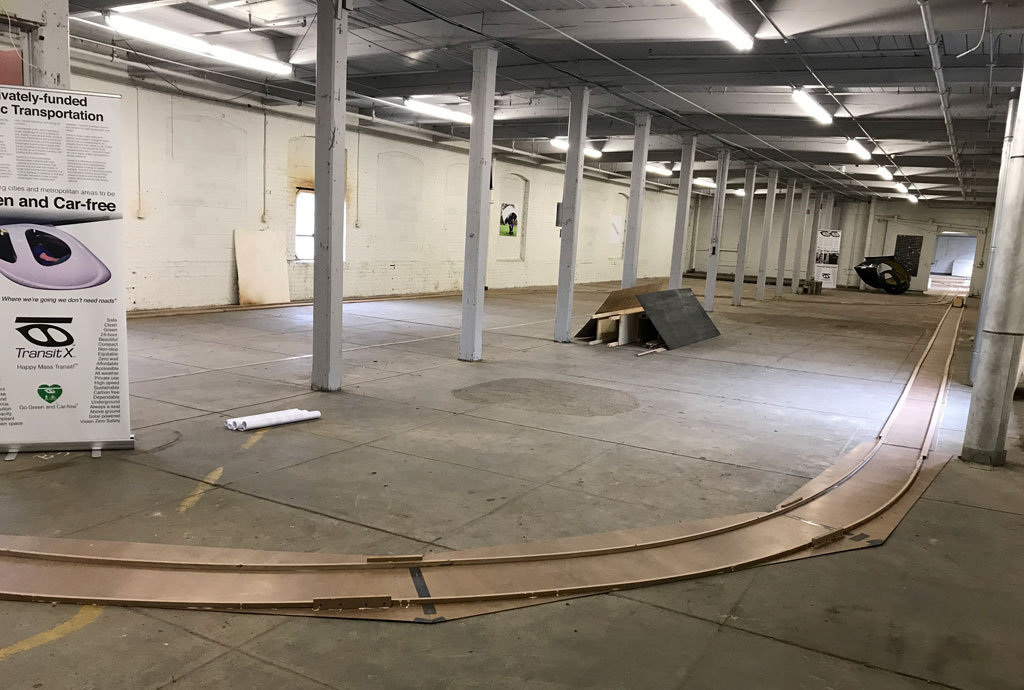 Transit X has a test facility in Leominster and says it is developing a quarter-mile track in Ohio. (Photo: Transit X)

Transit X came in for some rather brutal public comment before the withdrawal, including from Ari Ofsevit, technical advocacy director of the TransitMatters group in Boston and a Massachusetts Institute of Technology grad student in transportation engineering and urban planning. “This is nothing new or innovative [but] the latest iteration of something that has never seen much success,” Ofsevit said, citing the classic “Simpsons” episode in which Springfield falls for a monorail swindle. “Let’s talk about real transit issues … to say that this idea is half-baked would be to give it too much credit. It’s like taking the butter out of the freezer and declaring that the cookies are ready.”

Resident Charles Franklin was a skeptic as well after looking at Transit X materials. “Their transit pods are smaller than cars and the rails have less capacity than a traditional street, but there may be something I don’t understand about that type of infrastructure,” Franklin said. “Honestly, the thing that concerns me the most is the really poor CGI on their demo video. That may sound funny, but if they don’t have the funds to render some decent graphics, I don’t know how they’re going to install a citywide transit system.”

Reconsideration “down the line”?

A hearing of the Transit X system can be reconsidered “if it seems appropriate down the line,” Kelley noted, since his order was simply withdrawn.

But Mike Stanley, chief executive and founder of Transit X, was dismayed by the withdrawal and unamused by the residents’ comments.

Cambridge’s transportation issues and work to reduce carbon emissions made it seem like a natural fit for a Transit X trial, Stanley said by phone, and he thought it peculiar that he was finding such resistance in Cambridge, Somerville (which has expressed interest, he said) and Boston (which he called “very risk averse”), while drawing interest from officials in the Philippines, Africa and India, and especially in Atlanta and Ohio, where he said Ashtabula will host a quarter-mile test track. He said those make up the dozen locations moving forward with Transit X, and that there are close to 200 cities that want to move forward after seeing the first system run.

“Cambridge needs me, I don’t need Cambridge,” Stanley said, wondering why communities considered on the leading edge of technologies are choosing to be “a laggard in the most important development in transportation in a a century.”