A week of events in Cambridge, Somerville: ‘Space Opera’ returns, BAHFest back, more 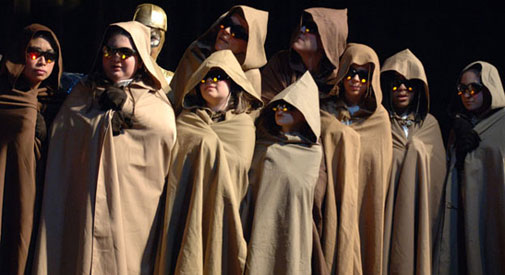 A week of events in Cambridge, Somerville: ‘Space Opera’ returns, BAHFest back, more

World Poetry Day reading, from 7 to 10 p.m. at The Greek Institute, 1038 Massachusetts Ave., Harvard Square. Free. Local Greek and American poets read from their works, led by George Kalogeris, poet and professor of English and classics in translation at Suffolk University. Information is here.

The Future of the Past: Art and Activism opening reception from 6:30 to 8:30 p.m. at the Marran Gallery, 34 Mellen St., on Lesley University’s Doble Campus in the Agassiz neighborhood near Harvard Square. Free. Artists step up as social activists in this show exhibiting through April 15, asking if this is the world we want – or if we can and will act to improve it, addressing humankind’s tendency toward violence and harm. Featured artists include Rachel Asarnow, Gail Jerauld Bos, Lorie Hamermesh (a detail of her work is pictured), Madeleine Lord, Bob McMackin, Stephan Reynolds, Ruth Rosner, Anne Strout and Calista Womick, Vulva Quilt facilitators Michaela Kirby and Michelle Napoli, and more. Information is here.

GrownUp StoryTime from 7 to 8 p.m. at Aeronaut Brewing, 14 Tyler St., near Union Square, Somerville. Free. Short fact, fiction and other material written by the community (this time including an R-rated piece by Cambridge Day’s Tom Meek) is handed to performers to see what happens. Information is here.

Rough Cut Media Screening from 7 to 9 p.m. at the Somerville Media Center, 90 Union Square, Somerville. Free. Short films, television shows, podcasts and other works in progress by artists. journalists and other creative types are presented for constructive feedback. Information is here.

Wicked Queer Film Festival begins its 11-day run at The Brattle Theatre, 40 Brattle St., Harvard Square, and other locations. Tickets range from $8 to $20. The 35th edition of the festival opens with a screening of Ellen Smit’s lighthearted Dutch romance “Just Friends” at 7:30 p.m., followed by a party at Beat Brew Hall, 13 Brattle St., Harvard Square. Information about the festival is here.

“Extremities” from 8 to 10 p.m. (and repeating eight times through April 13) at First Church in Cambridge, 11 Garden St., Harvard Square. General admission is $22. The Also Known As Theatre company and director Alexandra Smith stage William Mastrosimone’s play and find it just as relevant as it was 40 years ago, centered around the capture of a home invader and attempted rapist by women forced to consider the lengths must they go to if they’re to feel safe. Information is here.

Monkeyhouse’s “re{ACT} re{BUILD} re{COLLECT}” dance from 8 to 10 p.m. (and repeating Saturday) at the Multicultural Arts Center, 41 Second St., East Cambridge. General admission is $20 in advance, or $25 at the door. The choreographers and performers explore the ways we discover, connect with and remember the people and relationships that shape our lives. Information is here.

“Extremities” from 8 to 10 p.m. (and repeating eight times through April 13) at First Church in Cambridge, 11 Garden St., Harvard Square. General admission is $22. Information is here.

Drunk Opera History: Mozart Edition from noon to 2 p.m. at The Burren, 247 Elm St., Davis Square, Somerville. Free, but register here. Historian Mike Pfitzer dishes dirt about Mozart – the kind of intrigue and scandal that gets left out of history books and program notes – and a troupe of singers belt out some of his works for the brunch crowd. Information is here.

North Cambridge Family Opera’s “Space Opera 2019” from 2 to 4:30 p.m. and 7 to 9:30 p.m. (and repeating six times through April 7) in the auditorium of the Peabody School, 70 Rindge Ave., North Cambridge. There is a suggested donation of $12 for adults and $6 for children. The intergenerational group revives its first ever family opera, by founder David Bass, for a light-hearted and slightly familiar science fiction odyssey sung in a variety of popular and classical styles (in English with side titles). Information is here.

All Black People Are Not the Same: A Musical Discussion from 3 to 4 p.m. in the Varis lecture hall at the Granoff Music Center at Tufts University, 20 Talbot Ave., Somerville. Free. An interactive panel of faculty Emmanuel Attah Poku (Ghana) and Joel LaRue Smith (United States) and special guest Kimani Bishop (Trinidad and Tobago) discusses the similarities and differences of African diasporic music and their respective cultures. Information is here.

“Extremities” from 8 to 10 p.m. (and repeating eight times through April 13) at First Church in Cambridge, 11 Garden St., Harvard Square. General admission is $22. Information is here.

Monkeyhouse’s “re{ACT} re{BUILD} re{COLLECT}” dance from 8 to 10 p.m. (and repeating Saturday) at the Multicultural Arts Center, 41 Second St., East Cambridge. General admission is $20 in advance, or $25 at the door. Information is here.

Odds Bodkin’s “Fall of the Titans: The Original Game of Thrones” from 5:30 to 8:30 p.m. (doors at 5 p.m. – be warned, you’re expected to be seated before the performance begins) at Grendel’s Den Restaurant & Bar, 89 Winthrop St., Harvard Square. Tickets are $15 (with fees, $17.55). Professional storyteller and musician Odds Bodkin accompanies himself musically while looking at the Titans of Greek mythology – starting with Gaia, who gives birth eventually to hideous monsters who threaten her more beautiful god children. Information is here.

BAHFest MIT from 7 to 10 p.m. at the Massachusetts Institute of Technology’s Kresge Auditorium, 48 Massachusetts Ave. General admission is $25 (with fees, $28.16). In the Festival of Bad Ad Hoc Hypotheses (also known as BAH!), a hybrid of science and comedy founded at the Massachusetts Institute of Technology and grown into an international phenomenon, speakers present well-argued and thoroughly researched but completely incorrect theories in front of a live audience and a panel of geeky judges. The host of this bit of BAH is comedian-particle physicist Ben Lillie; keynote speaker is linguist John McWhorter; and judges are Rosemary Mosco, John Urschel, Deborah Blum and Ben Tolkin. Information is here.

Silent Film Club: We’ll Always Have Paris from 7:30 to 10 p.m. at Aeronaut Brewing, 14 Tyler St., near Union Square, Somerville. General admission is $10. A screening of “The Mystery of the Eiffel Tower” (1927) with live musical accompaniment by Jeff Rapsis. Information is here.

Concert III: Coming of Age from 8 to 10 p.m. (with a 7 p.m. preconcert talk) at the Longy School of Music’s Edward M. Pickman Hall, 27 Garden St., Harvard Square. General admission is $30 (with fees, $32.04). Works by Richard Festinger and Andrew Imbrie are the core of this final program of Collage New Music’s season, but they come with Eric Moe’s irrepressibly wacky “Dead Cat Bounce” and Yu-Hui Chang’s “Rhetorical Flourishes” with texts by Neil Shepherd – all first Boston or East Coast performances. Information is here.