‘Hotel Mumbai’: Caught in a terrorist attack, relying on themselves, each other to survive 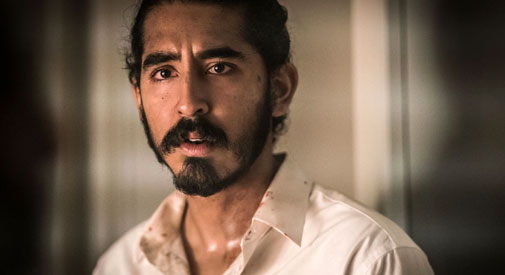 ‘Hotel Mumbai’: Caught in a terrorist attack, relying on themselves, each other to survive

The other day I was talking with some folk about the dark comedic virtues of Peter Bogdanovich’s “Targets,” which was made back in 1968 and clearly inspired by the Charles Whitman shooting spree of 1966. On that fateful Aug. 1, Whitman killed 16 people and shocked a nation that had never seen such carnage (now sadly common). It surfaced in Stanley Kubrick’s brilliant antiwar film “Full Metal Jacket” (1987) when R. Lee Ermey’s indelible drill instructor extols the virtue of Whitman’s marksmanship, and two years ago, in the riveting, animated documentary “Tower,” which outlined law enforcement’s inability at the time to deal with such a threat quickly or effectively, resulting in the formation of SWAT and other tactical response units. There’s a similar case in “Hotel Mumbai,” a based-on-real-events drama revolving around a 2008 terrorist attack and ensuing siege at the world-renowned Taj Mahal Palace Hotel. As history and Anthony Maras’ feature debut has it, Mumbai, a city of more than 18 million people, essentially had no response to deal with a handful of well-coordinated extremists armed with assault weapons and a take-no-prisoners mandate. 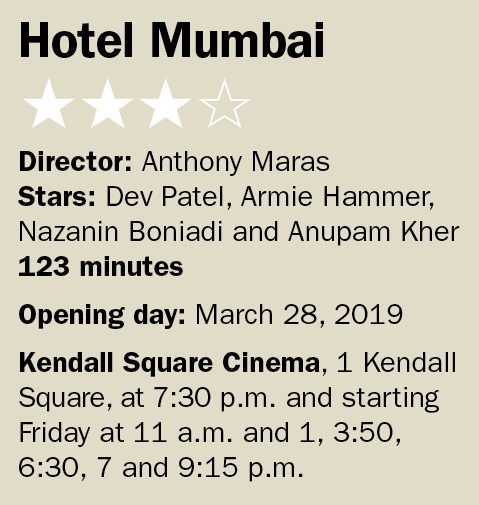 The film’s a nail-biter, to be sure, and quite effectively paced. We get to know some of the potential victims and heroes intimately, the way we did in Paul Greengrass’ harrowing 9/11 saga, “United 93” (2006). Perhaps to give the film a more international appeal and a Western flavor, much of the action hangs on an American architect named David (Armie Hammer) and his Middle Eastern wife Zahra (Nazanin Boniadi). Early on, before the shit goes down, the couple joke that they should have left their newborn at home (to enjoy more romantic time together), and probably wish that were so during the attack; they spend much of the hours-long assault separated from the baby, who’s vaulted inside a palatial suite with a rightfully hysterical nanny (Tilda Cobham-Hervey). From the staff side, we imbed with Arjun (Dev Patel, “Slumdog Millionaire”), a compassionate waitperson, and the strict but fearless head chef, Hemant Oberoi (Anupam Kher) who runs his kitchen like a military operation.

We get only a hint as to who these people are before Maras gets down to it with the four terrorists (Amandeep Singh, Suhail Nayyar, Yash Trivedi and Gaurav Paswala – all with cold, disaffected countenances, yet each nuanced in their own right) disembarking and systematically turning train stations and cafes across the city into kill boxes. Chaos consumes the streets, there’s nearly a dozen strikes, and then, just like that, the terrorists pack up their guns and mix in coolly with a panicked crowd trying to seek shelter in the grand hotel.

Where it goes from there is anywhere but predictable. Sure, the terrorists reload and go to town, and the anemic police response (who have only pistols, while the nearest special forces team is 800 miles away) heightens the sense of peril and hopelessness; but the decisions the staff and many of the guests make trying to outmaneuver the terrorists are bold and intriguing gambles. Many of the staff have the option to slip out the back, but at their own peril stick around to help the guests.

The grim reenactment works primarily because of the vast and credible ensemble, with restrained and subtly affecting performances by Patel and Kher standing out. Part of that’s because there’s as much fear in their heroism as steeled resolve – and even in that, there’s no trumpeting or drumbeating, like you’d find in a Michael Bay or Peter Berg film; Maras keeps it tight, human and clicking in real time with the stakes ever rising. Also worthy of note is Jason Isaacs as a brash, womanizing Russian tycoon who adds a dash of machismo panache, nailing the Russian accent and accompanying fuck-you attitude.

Part of what makes “Hotel Mumbai” so compelling is that it revisits a bit of world-rocking history that never fully became headline news. Like the Benghazi siege drama “13 Hours” (2016, ironically, effectively directed by Bay) the full course of harrowing events informs as it rivets with thriller-scripted tension. The most chilling aspect, however, comes in the ominous voice of the handler who calls into the terrorists throughout the assault, referring to them as his “lions” and rhapsodizing over the greatness that awaits them as they do their work for a greater cause. In one telling scene, a terrorist calls home to his father who is aware of the mission. When the son asks the father if he has received the money promised to the family, and the response is “no,” the look that comes over the young man’s face is a dagger of realization.