‘The Mustang’: Breaking horses as prison task builds powerfully for quiet man in a quiet film 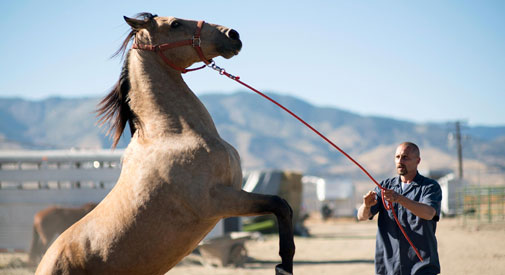 ‘The Mustang’: Breaking horses as prison task builds powerfully for quiet man in a quiet film

If “The Mustang” feels like something of a redux of “The Rider,” it is, especially if you consider the nucleus of a man trying to heal through bonding with a beast and the raw beauty of the tumbleweed-dusted valleys and plains that fill the screen. Both films deal with broken men. In the case of “The Rider,” Chloé Zhao’s beautiful second feature, it was physical as well as emotional, as a brain-injured horseman confronted the near certain risk of death should he mount a steed again. In the case of “The Mustang,” there are deeper and darker elements, namely that it’s set inside the razor-wired confines of a maximum security correctional facility in Nevada. 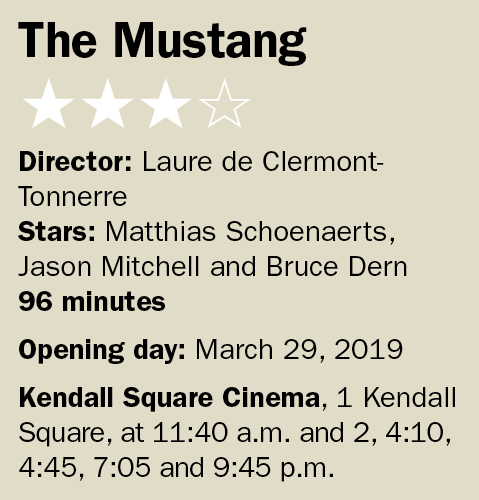 The broken man here is Roman Coleman (Matthias Schoenaerts), a transfer tossed immediately in solitary confinement because of an outburst at an anger management counselor (Connie Britton).  Not a good start, but Roman’s mostly a quiet, keep-to-himself kind of guy (“I’m not good with people,” he remarks). You can tell there’s simmering rage and demons inside, yet also vulnerability and compassion in those perpetually narrowed eyes. Once out of the box, Roman is assigned to shit duty – literally. The prison, because of its location in the heart of wild mustang country, runs a program to break the bucking beasts and sell them at auction – ironically, mostly to the police. For some reason, and we’re not entirely told why, Myles (Bruce Dern) the old codger who runs the equestrian side of the prison, sees something in the way Roman scoops up manure and mandates him into the program.

The horse-whispering is pretty neat and drives the film as expected, but it’s Roman’s bond with a fellow inmate, Henry (Jason Mitchell), and visits from his pregnant daughter, Martha (Gideon Adlon), who harbors justified animosity for her father, that cast a longer shadow. Issues of racial division are clearly etched in the yard, and there’s an illicit drug trade that threatens to drag in Roman.

Thankfully nothing about “The Mustang” is heavy handed; Laure de Clermont-Tonnerre has composed a quietly powerful portrait for her first feature, with a script so spare you almost wished people expressed themselves a bit more. Her real ace in the hole, besides the majestic beast that bucks its stall viciously (it too, gets tossed in solitary) is Schoenaerts, best known for his role as a Russian baddie in the silly and misguided J-Law spy thriller “Red Sparrow” (2018), but delivering a breakout performance here. With a shaved head and dewy eyes, he looks something like a mini-me version of Dwayne “The Rock” Johnson, and casts a presence that is at once intimidating and resilient while remaining soulful and pained, imbued with the rue of past actions. It’s a film-winning performance that’s aided just the slightest by prodding barbs from Dern’s cantankerous mentor, the warning snorts from the mercurial steed and mostly, the cagey, sassy baiting from Mitchell’s hands-on, horse-wrangling instructor.  The casting and arc of emotion couldn’t be more perfect, and the final frame will surely break you.