On Webster, we see how far Cambridge goes on protected bike lanes: Right up to city line 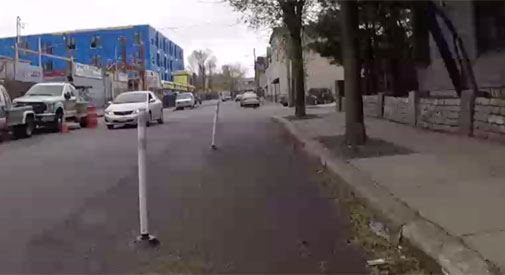 On Webster, we see how far Cambridge goes on protected bike lanes: Right up to city line

The City Council approved a Cycling Safety Ordinance this month requiring the city to add separated or protected bicycle infrastructure during construction of key routes in the Cambridge Bicycle Plan. So it rankles cycling advocates that the city resists installing a protected bike lane on a small stretch of Webster Avenue funneling into Cambridge from Somerville’s Union Square – one of the few main arteries that connect the two cities – after Somerville installed a protected bike lane in 2018 (taking away parking to do so) along its roughly 80 percent of the quarter-mile stretch late. As it is now, a cyclist coming down Webster from Union Square to Cambridge Street gets a stark transition from a protected bike lane (in Somerville) to the back end of a parked car (in Cambridge). Cyclists must have the acumen and verve to bounce out into the road and attempt to take the lane for the remaining hundred yards.

Here’s what these trips look like traveling on Webster:

To the council’s credit, Mayor Marc McGovern, vice mayor Jan Devereux and councillor Sumbul Siddiqui sponsored an order in January to have the city look into making a connection. The response filed Monday by City Manager Louis A. DePasquale notes that Webster is not listed as part of the Bike Plan network – which is under review – and cites the number of auto repair shops (and Pat’s Towing) along that stretch, as well as an unfortunate but familiar point: Somerville’s improvements were “implemented with limited coordination with Cambridge.”

This failure to connect across municipalities and agencies has long been a bane of commuting cyclists seeking safety and consistency. At a recent bike social put on by the Somerville Bike Committee at the Aeronaut Brewery, Cara Seiderman, a transportation program manager in Cambridge’s Community Development Department, admitted that city planners “were trying to get better at it.”

DePasquale’s response points bicyclists to alternative safe routes on Elm and Tremont streets, both small and with one-way traffic – but putting them on a path to make a left against traffic or continue across busy Cambridge Street without the benefit of a traffic signal, unlike Webster. Additionally, the road surfaces on Elm and Tremont, chosen because their narrowness allows and requires cyclists to claim the full lane, are unfriendly, pockmarked, overly patched and rough vibration jitter-fests – especially Elm, which isn’t due for serious work until 2022. (DePasquale suggested Monday he would act to make improvements faster.) The Cambridge portion of Webster is in no great shape, either.

Webster Avenue is a busy route for people who bike, as councillors heard from several who attended their Monday meeting. George Schneeloch, an MIT software engineer and member of the Cambridge Bicycle Safety group, said, the city’s reasoning was full of delay tactics that verged on “gaslighting,” showing mainly that its planners were “hopelessly out of touch.”

“Government has let down the people they have a responsibility to protect,” Schneeloch said.

Granted, there is construction at Cambridge and Webster streets, so getting any sort of solution in place – even if it’s temporary or just paint – would have logistical complications. For now the Bicycle Safety group intends to add the matter to its list of items to focus on at events and activities such as a Rally for Mass Ave and Critical Connectors to be staged Tuesday on the front lawn of City Hall, 795 Massachusetts Ave., Central Square.

Cambridge may have been the first city to mandate protected bike lanes, but if you go to Webster Avenue and look north and south from the town line, you can see exactly how far that policy takes us.