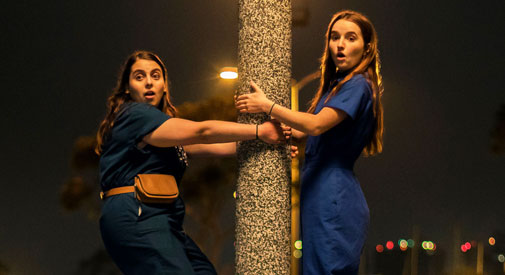 As I sat through “Booksmart” I felt like I was taking in something an update of “Romy and Michele’s High School Reunion” (the droll 1997 comedy that paired Mia Sorvino and Lisa Kudrow as goofball BFFs) if you took out the reunion and rolled back the clock to the fist-pumping highs and humiliating lows of school in real time. Aptly enough, Kudrow shows up as the perky mother of Amy (Kaitlyn Dever), one of two book-smart besties who make a freshman pact to avoid party life and spend weekends in the library to ensure straight As and acceptance to elite colleges – with the goal of shaping the future of the world. Lofty life goals, especially for Amy, who’s just come out but has yet to kiss a girl. On the other side of the nerd accord, Molly (Beanie Feldstein) registers as a bossy bowl of unbridled zeal. She’s class president and blusters on enthusiastically about how after graduating their Ivy League first choices the pair will set up in D.C., where she’ll become the youngest appointee to the Supreme Court. 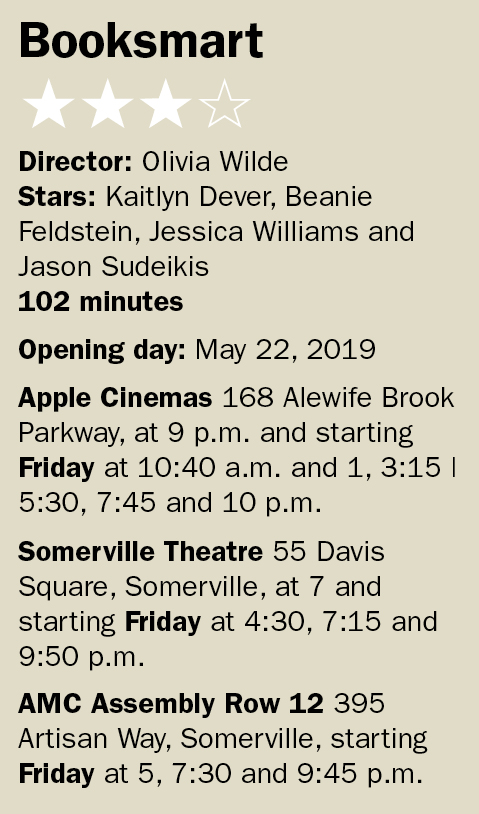 To say Molly’s a bit of an overplanner would be an understatement, but to date things have mostly worked out – she’s in at Yale. We catch up with the library-loving pair on the eve of graduation, when reality comes crashing in on their four-year abstinence. Molly, in the pleasant surroundings of a coed bathroom, learns that many of the partying jocks and popular girls also got in at their first choices – Stanford for the handsome A-Rod clone, and a much-scorned “easy” girl is also heading to Yale. Talk about a bucket of ice water, let alone a water-filled condom hurled in the hallway that finds its viscous mark. A quick re-eval and Molly decides that the two must hit the most hip and happening party that night to notch “a seminal fun antidote” and that smooch for her BFF who has her eye on a certain someone.

Directed by actress Olivia Wilde (“Beer Buddies”) making her feature filmmaking debut, and imbued with sharp, witty dialogue by a quartet of female writers (usually not a good sign when there’s a phalanx of penners, but that’s not the case here), the film rides the rails of many a teen comedy that’s come before – the seminal works of John Hughes, “Fast Times at Ridgemont High” and recent and darker films such as “Lady Bird” and “Eighth Grade” – namely that amid all the teenage hijinks, it’s really about friendship and support during the throes of those angst-filled, defining years.

Even if “Booksmart” pushes a few gags too far, it’s pleasantly smart and silly from start to end. Some of the best moments play off the young ladies’ yen for different genders. Take Amy’s wide-eyed Christian parents who think Molly and their daughter might be an item: Molly seizes just about every opportunity to play up the angle, mostly in the form of overzealous hugs that include conspicuous breast cupping. Then there’s the goofy reveal of self-pleasure items (not all treasured childhood toys remain in their innocent past) and Amy perusing porn in a Lyft driven by the moonlighting school principal for “educational purposes” (what to do with another girl). Add to the mix Billie Lourd and Skyler Gisondo as the school’s two super-rich eccentrics (Gigi, the ubiquitous teenage acid queen, and Jared, a yacht-owning loner and wayward romantic) and you have a rich potpourri that’s full of pop and zing. The romance takes some unexpected turns too, and in the end “Booksmart” is as much of a heart warmer as it is a tummy tickler. It’s not entirely polished, mind you, but the rough edges are small and easily forgotten with the infectious and palpable chemistry between Dever and Feldstein. Not enough can be said about their value to the film’s success – their dynamic duo and Wilde, playing it all just off-center, have made familiar tropes new and wickedly relevant again.