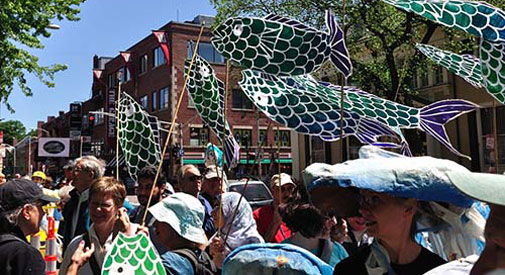 Campfire. Festival’s final day from noon to 10:30 p.m. Monday at Passim, 47 Palmer St., Harvard Square. Tickets are $10. Passim’s twice-a-year homegrown festival of Americana, bluegrass, blues, Celtic, country, folk and related musical styles wraps up its run throughout the long Memorial Day weekend with these 20 performances (including by Naomi Westwater, in a photo by Christina Cobb). Originally just a way to fill a bad booking weekend in 1998, the festival now competes with the rock- and pop-focused Boston Calling across the river. The distressingly punctuated Campfire. aims to develop talent and celebrate the local music scene, with organizers saying shows can blur the line between performer and audience member – just like might happen sitting around an actual campfire, strumming a guitar or two. The all-ages festival, now in its 21st year, has a full schedule here.

“Gaslight” at 4:30, 7 and 9:30 p.m. at The Brattle Theatre, 40 Brattle St., Harvard Square. General admission is $10 for the earliest showing, $12 afterward. You may as well understand the origins of a term used so often – and it goes all the way back to a 1938 play made into this 1944 film by George Cukor, in which a husband tries to make his wife think she’s going insane. Information is here.

Happy Hour: The Secret History of Boston’s Suburbs from 6 to 8:30 p.m. at 730 Tavern, 730 Massachusetts Ave., Central Square. Free, but advance registration is required because space is limited. DigBoston and CityLab senior editor Amanda Kolson Hurley (author of the new book “Radical Suburbs”) talk about the stereotypes of suburbs as affluent, conservative, orderly and a bit dull and reveal a “shadow suburbia” – places where people headed to the urban fringes to pursue a different way of life. Two of those historically radical suburbs are in Lexington. Information is here.

Weird Local Film Festival No. 9 from 7 to 10:30 p.m. at Warehouse XI, 11 Sanborn Court, Union Square, Somerville. There’s a suggested donation of $5 for this 18-plus show. There are nearly two dozen short works from “filmmakers in reasonable proximity to Somerville” on the tentative schedule for this semi-regular screening event. Information is here.

Toni Bee at the Boston Poetry Slam, from 7:15 p.m. to midnight at The Cantab Lounge, 738 Massachusetts Ave., Central Square. There’s a $3 cover for this 18-plus show. Toni Bee, the inaugural Cambridge poetry ambassador (2016), after becoming the first female poet populist of Cambridge (in 2011) reads, celebrating the release of her volume “22 Again,” after an hour of open mic starting at 8 p.m. Information is here.

“The Complete Works of William Shakespeare [Abridged]” from 8 to 10 p.m. (and repeating Friday and Saturday) at Unity Somerville, 6 William St., just off College Avenue near Davis Square, Somerville. General admission is $20 (with fees, $21.99). A race by eight actors to perform all of Shakespeare’s 37 plays in about 90 minutes. Information is here.

“Golp” staged reading from 7:30 to 9:30 p.m. at The Cambridge Center for Adult Education, 42 Brattle St., Harvard Square. Free, with donations requested. In this full-length reading of a play by Rosanna Yamagiwa Alfaro, of the Asian-American Playwright Collective, a scientist creates an android named Golp to babysit her daughter and cheer her aging mother. There are unexpected consequences. Information is here.

Astronomy After Hours from 8 to 10:30 p.m. at the Museum of Science, 1 Science Park, Boston, on the Cambridge border. Free. Friday nights from April to October – weather permitting – brings a variety of hands-on astronomy and space science activities, including viewings through the Schmidt-Cassegrain telescope in the Gilliland Observatory. Information is here.

The Kerfuffle’s “The Good, The Bad, & The Ugly” from 9:30 p.m to midnight at The Rockwell, 255 Elm St., Davis Square, Somerville. Tickets are $12 for this 21-plus show. The vaudeville-style variety show returns from a two-year hiatus with sketch, interactive and alternative comedy (“all things absurd, hilarious, poignant, perilous, stupid, unpredictable, filthy and brilliant”) with a night loosely inspired by it being set on Clint Eastwood’s birthday. Information is here.

“The Complete Works of William Shakespeare [Abridged]” from 8 to 10 p.m. (and repeating Friday and Saturday and then three more times through June 1) at Unity Somerville, 6 William St., just off College Avenue near Davis Square, Somerville. General admission is $20 (with fees, $21.99). Information is here.

Cambridge Arts River Festival from 11 a.m. to 6 p.m. in the Central Square Cultural District, along Massachusetts Avenue between Prospect and Sidney streets and beyond. Free. The 40th annual festival includes four stages of music and dance, theater, immersive art experiences and vendors selling crafts, international foods and craft brews. Paint a city snowplow; watch poems being printed by a 2-ton steamroller; go on a tour of murals around Central Square; watch a sculpture race at 11 a.m., after which the vehicles will be on display at Carl F. Barron Plaza until 5 p.m.; hear a Bridgeside Cypher at 2 p.m. in Graffiti Alley, across from Pearl Street on Massachusetts Avenue; and see a Mermaid Promenade along Massachusetts Avenue at 4 p.m., with music by Rara Bel Poze and the Band Land Brass Band and giant puppets by The Puppeteers’ Cooperative, Behind the Mask Studio, The Cambridge Wildlife Puppetry Project and Honey Goodenough of the Puppet Showplace Theater. (Join by lining up in a marine-themed costume at 3:30 p.m. at the Youth Stage near Massachusetts Avenue and Essex Street.) The climate change theme informs not just the Mermaid Promenade, but the solar-powered stages, composting bins, elimination of some vendor plastics and swapping out of water bottles for filling stations. Information is here.

“The Nature Plays” from 1 to 2:15  and 5 to 6:15 p.m. (and repeating Sunday and five more times through June 9) at Mount Auburn Cemetery, 580 Mt Auburn St., West Cambridge. General admission is $35. The cemetery’s first playwright artist-in-residence, Patrick Gabridge, has written two sets of five plays; here are the first, inspired by the site’s environment, including spotted salamanders in Consecration Dell, birders at Auburn Lake and historic debates between naturalists who are buried throughout. Audiences watch at various spots across the grounds, and performances are followed by discussion. Information is here.

“Interiors” group exhibition opening reception from 6 to 9 p.m. at Washington Street Art, 321 Washington St., Somerville. Free. Curated by Maggie Cedarstrom, this show looks at what lies within or beneath surfaces to depict inside space – whether of a home, a cellular structure or the subconscious. Information is here.

“The Complete Works of William Shakespeare [Abridged]” from 8 to 10 p.m. (and repeating Friday and Saturday and then three more times through June 1) at Unity Somerville, 6 William St., just off College Avenue near Davis Square, Somerville. General admission is $20 (with fees, $21.99). Information is here.

Pinbrawl from 2 to 5 p.m. at Flat Top Johnny’s, 1 Kendall Square. There’s a $5 buy-in, which goes to cash prizes, to get on a four-player group for the playoffs. Information is here.

Tenth annual Carnaval Somerstreets festival from 2 to 6 p.m. on Lower Broadway in East Somerville (from McGrath Highway to Pennsylvania Avenue, by the Sullivan Square T stop). Free. The street closes to cars and opens to some 6,000 people enjoying music, dance performances, interactive activities, a craft fair and food from all over the world. Look for the Somerville Media Center team and tell a Somerville story that will be shown on SCATV Channel 3 and posted online. Information is here.

Boston Youth Symphony Orchestras concert from 7 to 9 p.m. at the Massachusetts Institute of Technology’s Kresge Auditorium, 48 Massachusetts Ave. General admission is $17. The repertory orchestra takes on Grieg’s Piano Concerto in A Major with concerto competition winner Jessie Liu; and Rachmaninoff’s Symphony No. 2. Information is here.

The Weirdo Show, hosted by Niki Luparelli, from 8 to 10 p.m. at The Comedy Studio, 1 Bow Market Way, Union Square, Somerville. Tickets are $12 in advance (or $13.36 with fees) or $15 the day of the show (or $16.45 with fees). This children’s show for adults – with wacky neighbors, edutainment, musical numbers and puppet friends with substance abuse issues – features Chris Coxen, Mark Gallagher, Ethan Marsh, Michael Atkinson, Nate Johnson, Katie McCarthy and Nick Ortolani, Lindita Taka, Sam Pelletier and select drag performances from the Queens of Worcester. Information is here.