‘The Dead Don’t Die’: Jarmusch wins with cast but loses a battle of wits against zombie genre 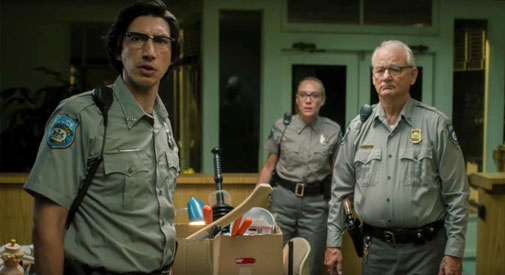 ‘The Dead Don’t Die’: Jarmusch wins with cast but loses a battle of wits against zombie genre

After the subtly dark vampire satire “Only Lovers Left Alive” (2013), the prospect of witty, deadpan filmmaker Jim Jarmusch taking a shot at the zombie apocalypse seemed as plump and juicy as a pinned motorist under a flipped car struggling to get free before a lumbering herd of ravenous undead arrives. Truth be told, Jarmusch’s droll, genre-deconstructing zom-edy could have used a bit more meat on its hollow bones. As is, it reanimates plenty from George Romero’s canon of shambling-undead work, starting with the small-town setting of his seminal 1968 classic “Night of the Living Dead,” a rural Pennsylvania podunk an hour or so from Pittsburgh. To give “The Dead Don’t Die” a bit of a nod-and-wink edge, Jarmusch also kicks down the fourth wall from time to time – mostly to humorous effect, but not always. 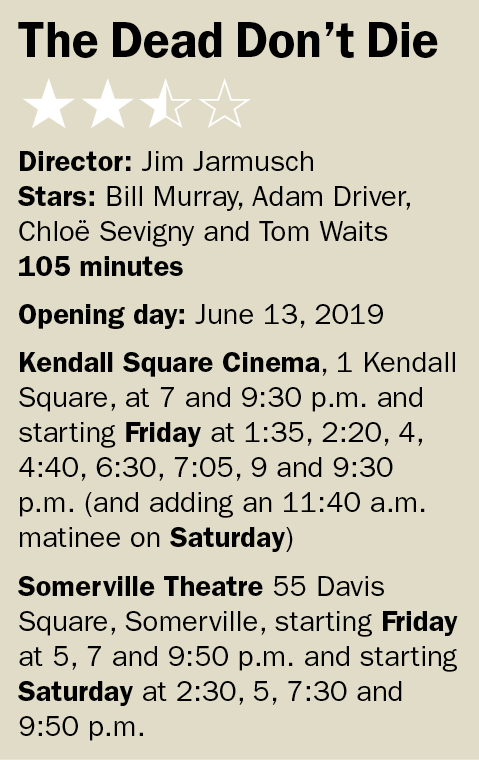 The major wins here come in a wide-ranging cast that includes Iggy Pop, Carol Kane, Danny Glover and Steve Buscemi in small, bloody bits: Pop as a punked-out zombie and Buscemi as a cantankerous Trump-esque supporter wearing a “Make America White Again” red hat snarling about invaders trespassing on his farm as he blasts apart undead heads with a shotgun.

The world-ending mayhem centers more around a should-have-been-retired gent by the name of Cliff Robertson (Bill Murray – I’m guessing the movie actor reference is intended), the sheriff of Centerville (pop. less than 800 at the start of the film, maybe more at the end if you add in the reanimated) and his deputies Ronnie (Adam Driver) and Mindy (Chloe Sevigny). Even before the first innards are strewn about Centerville’s only diner Ronnie keeps remarking that the culprit is zombies, with the added refrain that “It’s not going to end well.” When pressed on how he’s so certain, Ronnie replies casually that he’s read the script. Yup, it’s that kind of flick. You may balk or embrace it. No matter. This is a Jarmusch film, and the dialogue is chewy and rich even in the gut-masticating jaws of death.

Why the dead get up and begin to munch on the living has something to do with polar fracking tossing the earth off its axis and a “fake news” coverup by big energy and complacent cable news stations – imagine that? As the hordes of decaying beloved erupt from their subterranean nests in a threat far more titillating than the reality, the film begins to stumble and list like one of its ghouls. Thankfully Tilda Swinton whooshes in as a newly transplanted mortician with a weird way of speaking (Scottish and proper) and means of making exact 90-degree angles when walking. She’s also in the elite class of Uma Thurman’s bride from the “Kill Bill” movies and Michonne from “The Walking Dead” when it comes to slicing and dicing with a samurai sword. Her elven embalmer has plenty of fun beheading the undead (there’s no gore, just black, dusty wisps), as do we with her, and then in the flash of her blade or an otherworldly light she’s taken from us, and the film’s soul is too.

Amid the disjointed olio there’s some nifty, witty play about kids of color in a detention facility getting the last laugh and the film’s titular theme song by a Johnny Cash-sounding Sturgill Simpson working its way into the plot, not to mention zombies clinging to old habits such as Wi-Fi, coffee and smartphones – though Jarmusch overuses the commercialism message from Romero’s “Dawn of the Dead” as he runs out of ideas on where to go. Then things jump the headstone, mostly in the uninspired denouement, and there’s the scene when Ronnie drinks in the vision of a comely hipster from out of town (Selena Gomez) and remarks to Cliff that he knows she’s part Mexican because he has an affinity for Mexicans.  It’s so random and, given politics these days, odd – it has no obvious payoff.

Shamble on, you silly ghouls.