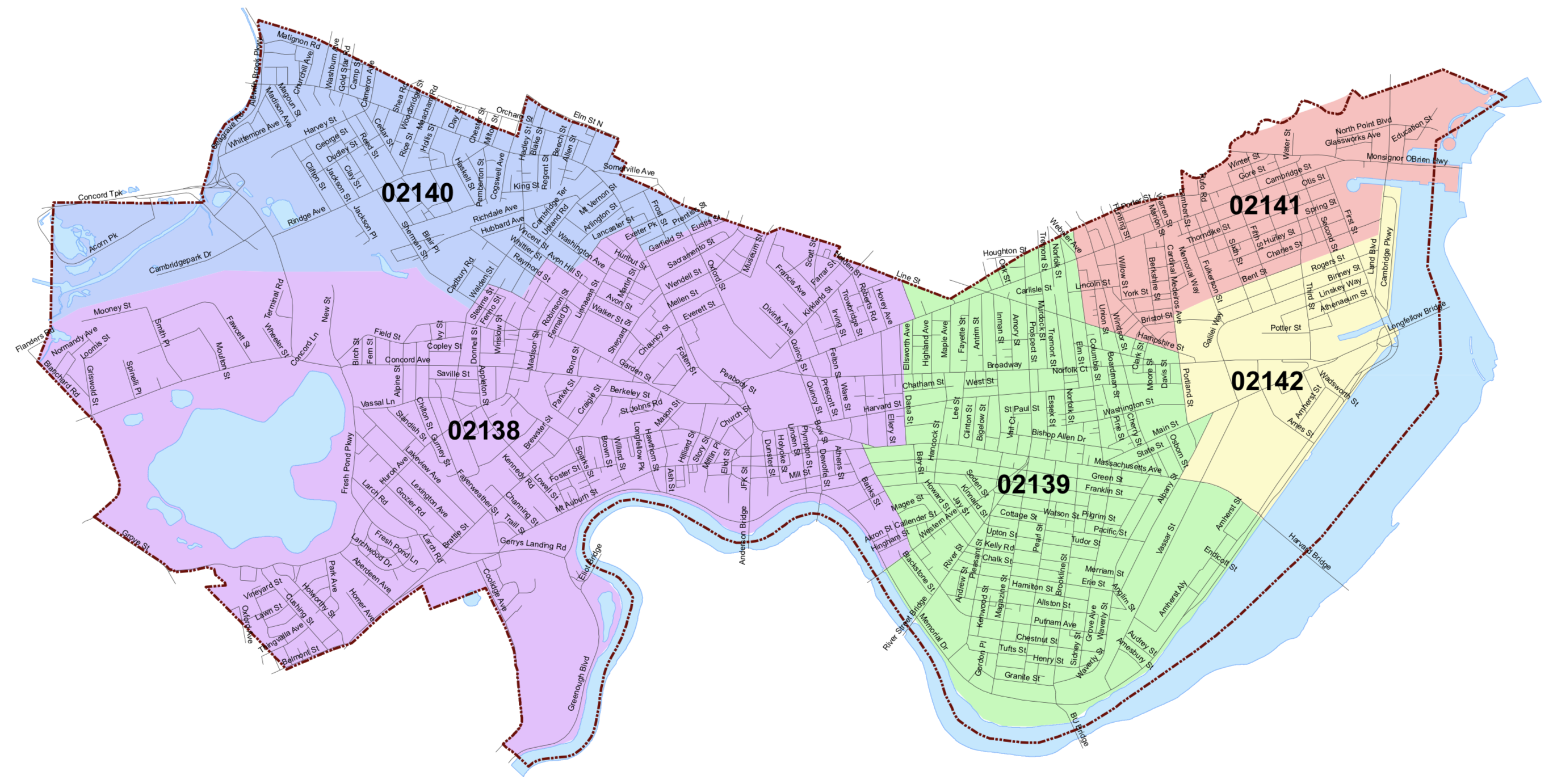 The Cambridge Housing Authority is trying a new tactic to make more housing available to low-income residents in a high-rent city – one that doesn’t require building anything. Instead, the housing agency intends to set maximum rents available to landlords in the Section 8 voucher program by ZIP code instead of citywide. 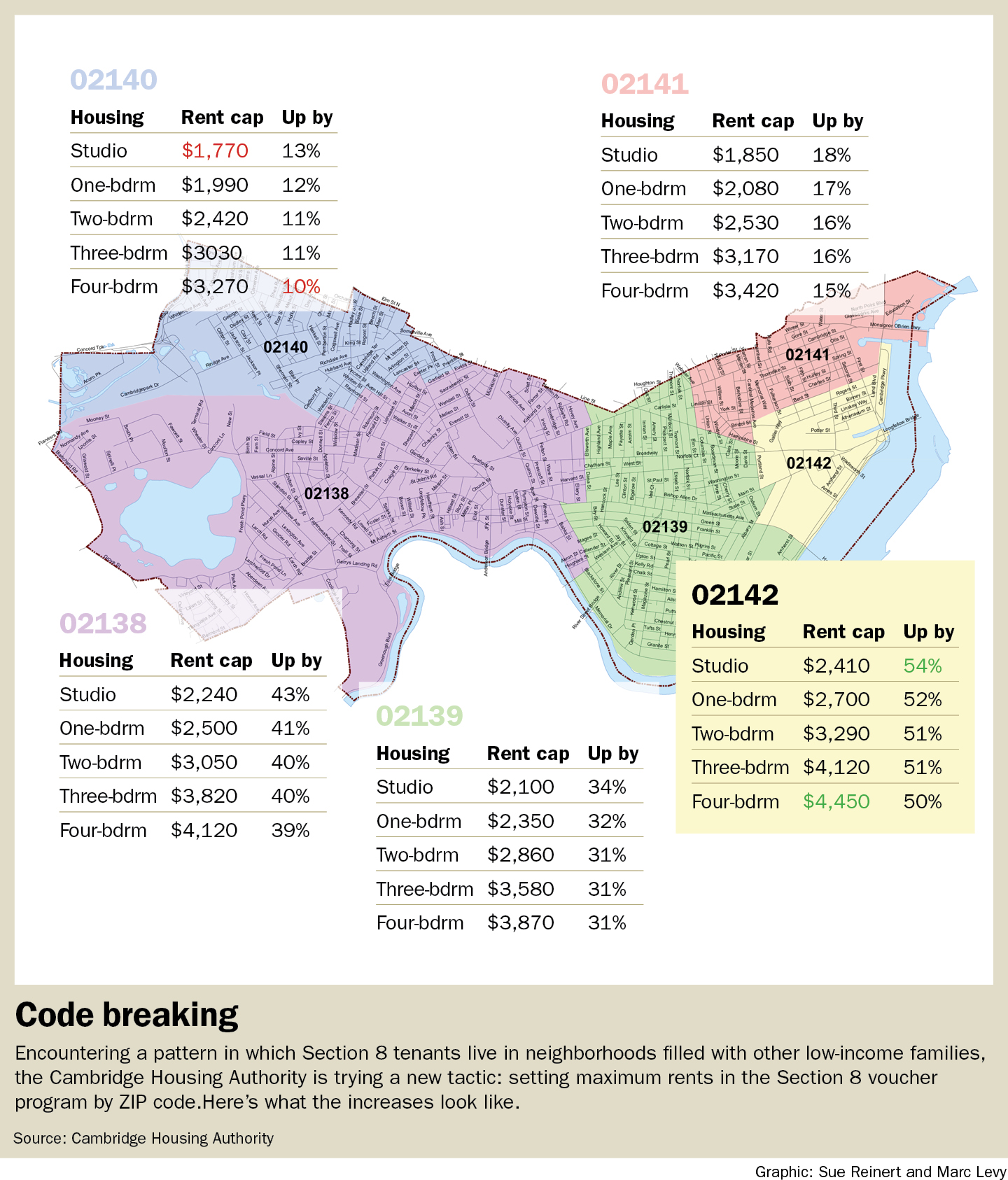 This move, together with a giant increase in the Section 8 rent cap overall, could open Cambridge’s higher-income neighborhoods to poor tenants with rent vouchers for the first time, agency officials said at a board meeting June 16. “This would unlock Authority codes where we don’t have a lot of Section 8 [units],” director of leased housing Hannah Lodi told its commissioners.

The Section 8 program helps low-income renters pay for housing in the private market. The tenant pays 30 percent of his or her income toward the rent and the federal government pays the rest, up to a government-set limit.

That limit has frustrated the housing authority in recent years, even though the agency has used its freedom from some federal rules to set maximum rents here well above the cap promulgated by the U.S. Department of Housing and Urban Development. Still, Cambridge rents are rising so quickly and sharply that many Section 8 voucher holders must seek housing outside Cambridge, and some can’t find a unit at all before their vouchers expire.

The situation can reinforce a pattern in which Section 8 tenants live in neighborhoods filled with other low-income families, advocates for poor tenants say. Studies indicate that poor children who grow up in high-poverty areas earn less as adults than kids in low-income families who are raised in neighborhoods with fewer poor households. CHA has embraced these mixed findings and pushed to have them used to set policy.

Cambridge is a small city and its neighborhoods are not as divided by income and race as in some larger cities. Still, six of the city’s 32 census tracts contain half of Cambridge families living in poverty, an analysis by the Community Development Department says. Figures on the department’s website show that 76 percent of the households that get food stamps live in just two zip codes: 02139 and 02140. The proportion of black or Hispanic residents is 4 percent in Cambridge Highlands and 6 percent in West Cambridge, while 27 percent of North Cambridge residents are black or Hispanic.

Almost 40 percent of Section 8 households renting in Cambridge live in one ZIP code: 02139, the housing authority says. It covers Cambridgeport and The Port. Only 5 percent are in 02142, near Kendall Square.

Switching to the ZIP code method can cause problems, low-income housing advocates say. If the change means a decrease in Section 8 rents in poorer neighborhoods – where many voucher-holders live – landlords may leave the program and therefore reduce the supply of available rentals. If rent caps spike in some areas, it can inflate the cost of housing for everyone.

The federal government approved setting caps by ZIP code in 2016, but Cambridge and Boston waited because of concerns about the impacts, local housing authority executive director Michael Johnston said. The two cities are going ahead now because Housing and Urban Development has approved a massive overall increase of about 26 percent in Section 8 rents in the Boston-Quincy-New Hampshire metropolitan area. The approval came after Cambridge and Boston housing authorities and the state Department of Housing and Community Development appealed the federal agency’s initial caps for 2019, Johnston said.

With the overall hike, no rent caps in Cambridge will fall this year even in poorer neighborhoods, Johnston said. But Section 8 maximums in 02140 and 02141 won’t rise by the full 26 percent, a CHA analysis showed.

The local agency is going ahead with the caps starting July 1. Boston is in the process of approving the change. But the state won’t follow suit, and it administers about 22,000 vouchers across Massachusetts, by far the largest number.

The change “warrants further study to fully understand the implications for all Department of Housing and Community Development’s Housing Choice Voucher Program tenants” as well as “tenants of other programs administered by DHCD,” spokeswoman Samantha Kaufman said.

About 7,400 vouchers administered by the state are in the same area covered by the Boston Housing Authority, which is adopting the ZIP codes. The state agency will still be able to raise the cap by 26 percent across the board for its vouchers in the Boston region.

It’s important for communities to coordinate their Section 8 rent caps “so as not to put their own voucher holders at a disadvantage when searching” for an apartment in the region, Lodi, the head of leased housing, wrote in a memo to commissioners along with the ZIP code proposal. Also, differing Section 8 rents in the same community could confuse families looking for housing and foster competition among them, she said.

Cambridge has traditionally used Boston’s caps for vouchers it administers in Boston and will continue that policy, Lodi said. The ZIP code-based maximums in Cambridge will not apply to Section 8 vouchers used for inclusionary zoning units in luxury projects, or for project-based vouchers, those tied to a particular apartment.