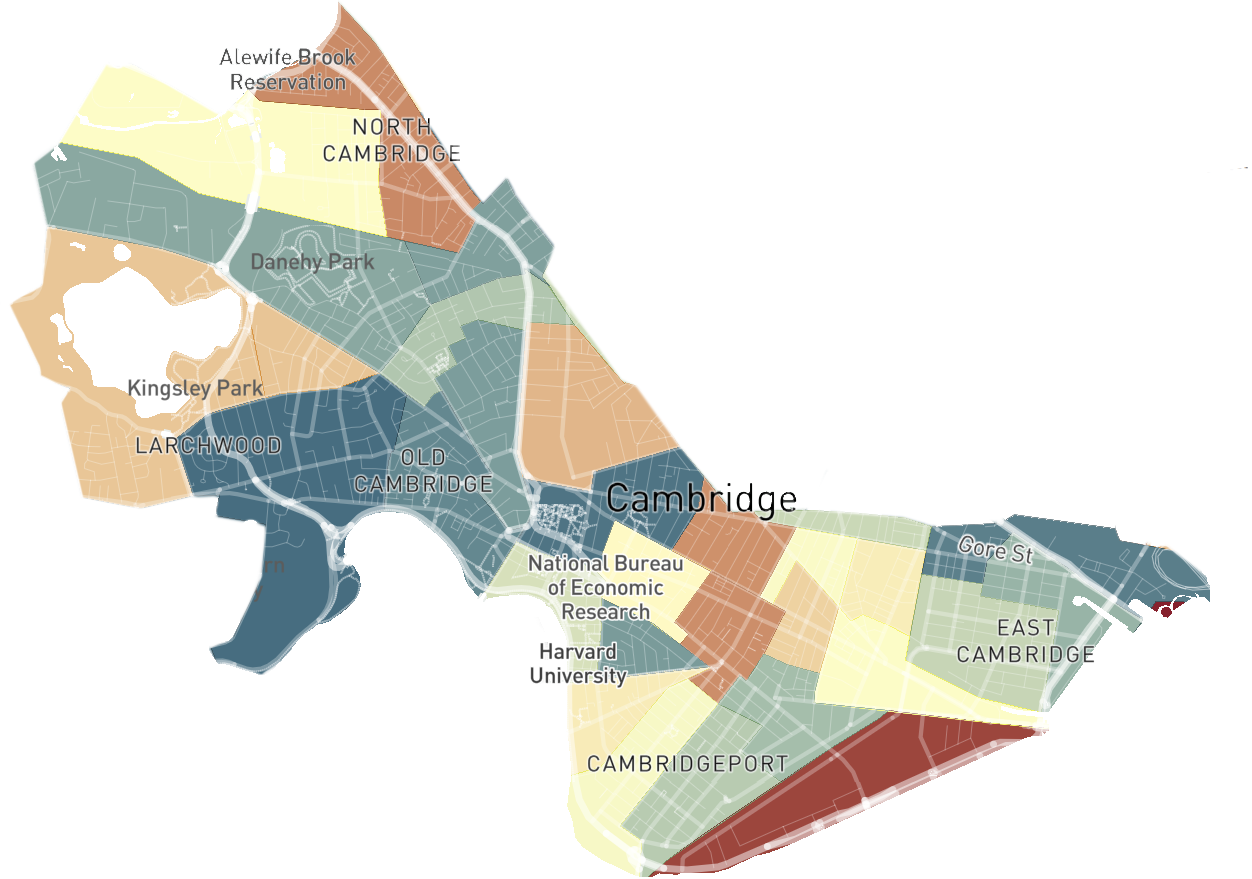 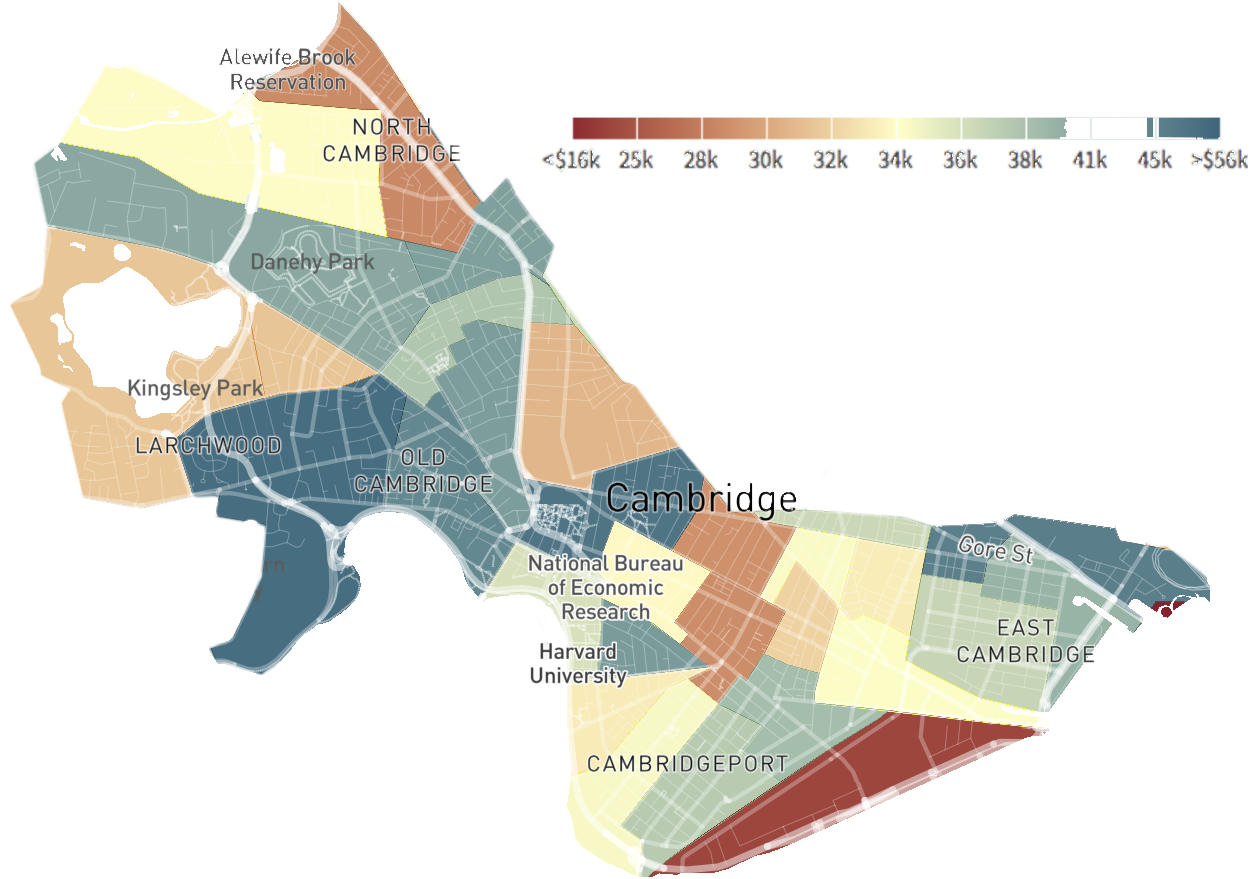 A map from the Opportunity Atlas shows income ranges in Cambridge by tract. Explore the site by clicking on the image.

Three years ago, when a Harvard University researcher published a groundbreaking study linking poor children’s success in adulthood to the counties where they grew up, public housing officials here had no doubt Cambridge was one of the good places. The Cambridge Housing Authority spearheaded a meeting between author Raj Chetty and officials from 15 other public housing agencies so all could make use of another Chetty report showing that children in Section 8 voucher families who moved out of low-income neighborhoods did better than those who stayed.

Now Chetty and his colleagues have released a study that looks at poor children’s success by census tract, an area akin to a city neighborhood. And the new data paint a more mixed picture of Cambridge as a desirable place for low-income children to grow up.

For example, poor kids who were born in a North Cambridge census tract in the late 1970s to early 1980s had estimated average household income of $29,000 when they reached their 30s. In contrast, adult household income was $47,000 for children from low-income families in West Cambridge.

Hispanic children recorded the lowest gains, with those brought up in a Mid-Cambridge tract earning just $19,000. Interestingly, Hispanic kids from The Port, considered one of the city’s poorest neighborhoods, earned as much as $45,000 as adults.

The figures also showed that children brought up in Cambridge, like most other American kids, don’t have a lot of economic mobility. Kids from low-income families earned less in adulthood than those from middle-income families, who earned less than children from high-income families. This pattern held true regardless of neighborhood.

The researchers collected information on 20.5 million people born between 1978 and 1983, linking them to the census tract where they were born. It followed them until they reached their 30s; researchers have said the length is necessary for reliable assessment of income and other measures of success. The study used Census and Internal Revenue Service records that had been stripped of identifying information.

People can look up statistics for their own neighborhood at opportunityatlas.org. The website includes a color-coded map that shows how Cambridge compares on many measures for each census tract, including figures on income of children who grew up there, poverty rate, incarceration and fraction of single parents. The website lets people single out results by race, gender and parents’ income level. Results in Cambridge can be compared with national figures for everyone, national figures for the particular group being examined or statistics for other Cambridge census tracts. Some neighborhoods didn’t have enough data for results; figures on black kids were missing in a number of Cambridge tracts. And for some areas, statistics were too sparse to give reliable results by tract on certain measures for particular groups.

The report hasn’t sparked much interest here, despite city discussion of an affordable housing zoning overlay that could move some lower-income families into higher-income parts of the city. A spokeswoman for the city’s Community Development Department said the department has no plans to use the data. Cambridge Housing Authority executive director Mike Johnston said the agency is working on understanding the import of the study.

Johnston acknowledged that it gave him pause to see figures showing that in almost all Cambridge neighborhoods, black children from poor families did worse than white kids in adulthood.

The CHA is still trying to bring back low-income rent voucher tenants who found apartments outside Cambridge. “What we’re trying to do is bring people back to Cambridge because we believe Cambridge is a high-opportunity neighborhood,” Johnston said.

About 49 percent of the agency’s Section 8 voucher holders are living outside Cambridge, but data on the voucher holders shows many of those who moved outside Cambridge were not from the city; 53.5 percent were from Cambridge, and the largest number from other communities was 13.7 percent from Boston. Many said landlords refused to accept a rent assistance voucher – a problem not limited to Cambridge – and that they couldn’t find an affordable apartment in Cambridge that met their needs; the federal program pays the portion of the rent above 30 percent of the tenant’s income but sets a limit on the total rent it will subsidize.

A survey of Section 8 tenants living outside Cambridge found that 63 percent wanted to move back, but so far not many voucher holders have responded to agency efforts including giving returning Section 8 tenants priority over other applicants from outside the city seeking public housing here. The authority marketed its newly built development, Jefferson Park State, specifically to voucher holders outside Cambridge, but only “three or four” moved back, Johnston said.

Johnston speculated that low-income parents “have so many concerns” and “a lot of people are not thinking about, ‘If I live in this neighborhood will it be better for my children?’ It’s almost like social engineering.”