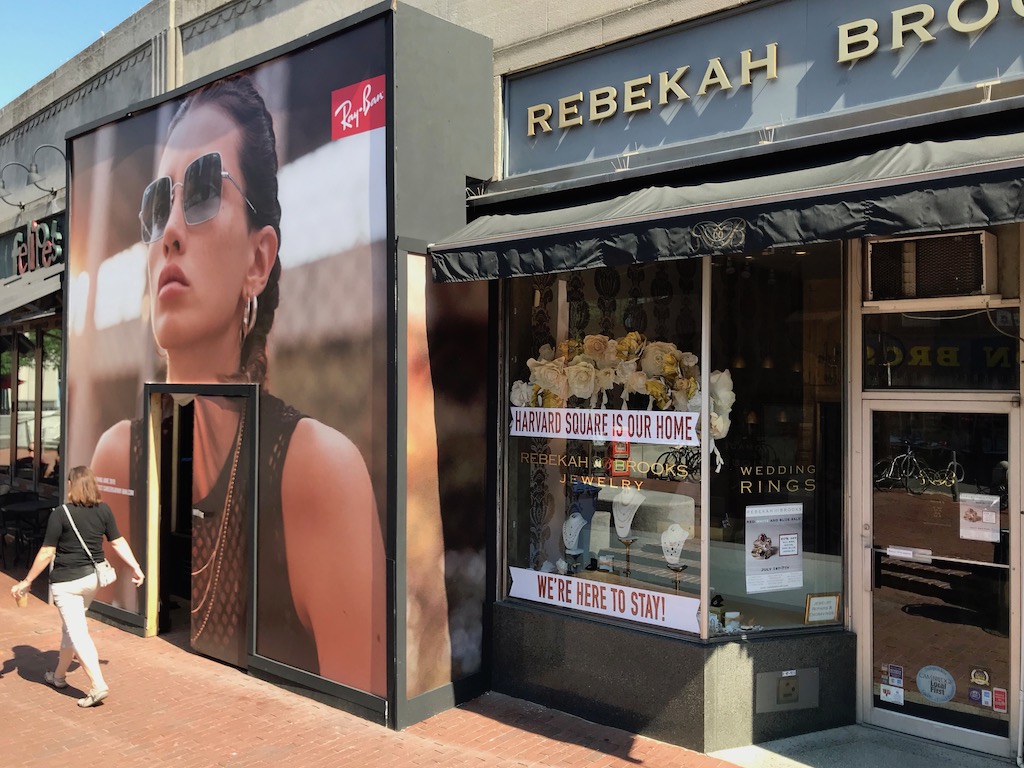 A Harvard Square construction facade was put on notice as illegal a week ago, according to city staff, without response from the property owners and managers. (Photo: Marc Levy)

A Ray-Ban sunglasses store is under construction in the heart of Harvard Square, but it’s already started advertising – illegally.

In preparation for taking over the old Motto jewelry storefront at 19 Brattle St. (the shop has moved around the block to 26 Church St., once the LF clothing shop), last week property owners Asana Partners put up a construction facade stretching from Felipe’s Taqueria to Rebekah Brooks jewelers and bearing the image of a very tan woman in a mesh top, gold chains and, of course, sunglasses. It may be more attractive than the construction it’s meant to hide, but it’s considered advertising, and it’s a violation of city sign laws.

The Historical Commission limits signs to one square foot for every linear foot of frontage, which makes this sign 15 times bigger than what is legally permitted, Labandibar said, pointing also to Cambridge retail strategy report recommendations that asks construction near retail businesses to “redirect attention to the impacted businesses, not away from it.”

Liza Paden, a project planner with the Community Development Department, agreed June 26 that the construction facade was illegal, and said the city’s Inspectional Services Department had already sent out an enforcement action to deal with it. With the facade still up Wednesday as work went on inside, Inspectional Services confirmed that the enforcement action had been sent to the property owners and managers, Asana of Charlotte, North Carolina, and the department was waiting for a response.

Asana bought its historic Harvard Square parcels in December 2017 for $108 million, buying a wait-and-see period as well with assurances by co-founder Sam Judd that he used to live in Porter Square, grew up in the area and understands “the emotional involvement of everybody in Harvard Square.”

“We have a big affinity for Harvard Square. We want to see the character of the Square preserved,” Judd said at the time.

Potential goodwill burned off a year later, when Crema Cafe was forced out by a reported tripling of the rent for the popular, locally owned small business in favor of a New York-based cafe chain called Bluestone Lane – despite there being space immediately next door that has been vacant for more than two years since the closing of Hidden Sweets in December 2016. It remains to be seen how a Ray-Ban store will be greeted by Cambridge; there are ongoing community complaints about Harvard Square being turned into a mall, but this is a higher-end chain at home on a sidewalk in New York’s SoHo neighborhood, as well as in the kinds of malls in Los Angeles and Austin, Texas, that find fancy ways to avoid calling themselves malls.

A message was left with Asana’s press office seeking comment.