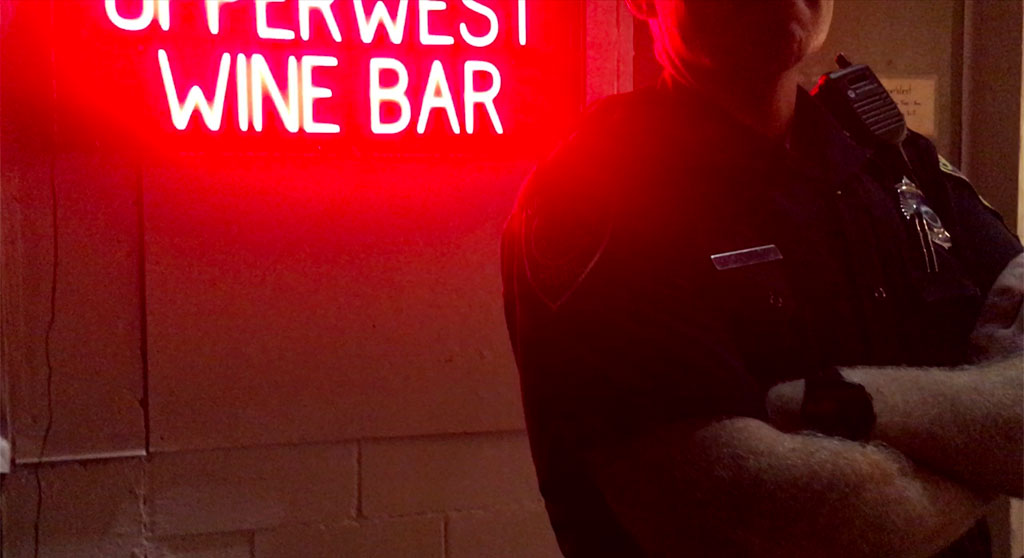 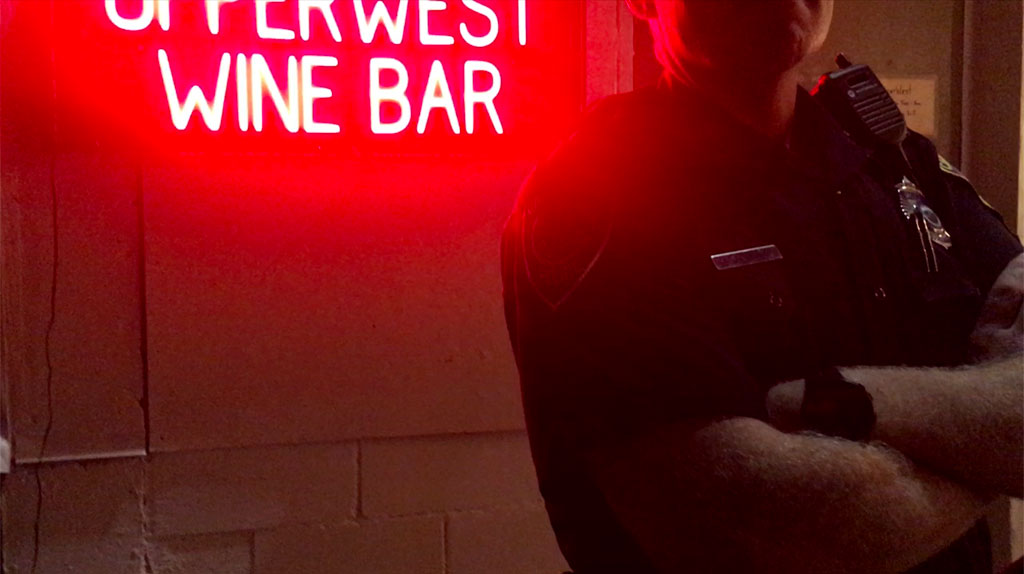 The ACLU expressed concern at a state judgment this week that “raises serious constitutional issues, particularly with regard to free speech” by showing that complaints about employees can be treated criminally – as “threats” against them. The judgment also suggests video and audio taken on a smartphone might be disregarded completely by a court as not capturing “every word.”

In a finding Thursday that followed a six-day series of hearings, the state Alcoholic Beverages Control Commission said that Cambridge fire inspectors pointed to an irrelevant state law to threaten the UpperWest bar on Cedar Street with being shut down if its owners didn’t extinguish tea lights that had been set out for atmosphere.

Yet when the owners argued with fire inspectors on the scene – correctly – that inspectors were enforcing an inappropriate and irrelevant law and would “regret behaving this way [because] this is not how this works,” the owners became guilty of making threats and trying to intimidate officials, according to ABCC commissioners Jean Lorizio, Elizabeth Lashway and Kathleen McNally. 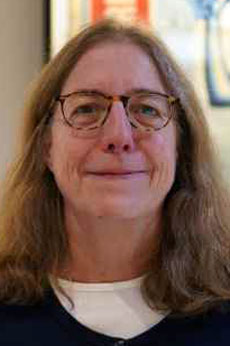 “There is no allegation of anything in this case remotely approaching a true threat or otherwise removing the owners’ speech from constitutional protections,” said Ruth Bourquin, senior and managing attorney at the ACLU of Massachusetts, on Friday.

“At most, the owners of this establishment engaged officers in a lengthy discussion – in which the officers voluntarily participated – about how the officers were wrong about the law,” Bourquin said. As to an owner’s comment about regretting their approach to enforcement, “regret it they should: The commission specifically ruled that the officers threatened to suspend operation of this business based on the officers’ misapplication of the law.”

Expressing surprise at the state finding, Bourquin noted that the Massachusetts and U.S. constitutions protect the right to strongly criticize government officials except in extreme circumstances, such as when that criticism contains a true threat of physical violence – which comments about “regret” made Sept. 29, 2018, did not.

That was when Cambridge Fire Department deputy chief Peter Donovan and Capt. Philip Arsenault showed up at UpperWest with Cambridge police officer Dan McGinty to enforce the irrelevant law. The conversation was heated, as captured in audio and video taken by UpperWest owners Kim Courtney and Xavier Dietrich, and the inspectors and owners got close while arguing over information on pieces of paper that had to be held.

The fire inspectors testified to the city in November that they understood “threats” about regretting the inappropriate enforcement were not physical; when the License Commission issued several days of license suspension as punishment that UpperWest appealed to the state, the inspectors repeated their understanding of the comments to the ABCC panel. In addition, McGinty, as the city’s witness, acknowledged there was no crime committed by UpperWest’s owners during fire inspectors’ visit – though that was not where he began his testimony to the state June 24.

It was only during a cross-examination by Courtney – also a lawyer – that McGinty acknowledged he could not say what crime had been committed.

“Officer McGinty, you testified that we threatened to commit a crime, correct?” Courtney asked.

“What crime was that?” Courtney asked.

“When you made the statement, ‘You will live to regret this,’ that would be threatening possible employment, like with their employer or possible lawsuit,” McGinty said.

“Is it a crime to sue someone?” Courtney asked.

“Is it a crime to file a complaint against someone?” Dietrich asked.

Asked if he’d seen any other “threats” that he believed constituted crimes, McGinty said, “No.”

In finding UpperWest at fault for “threats,” the commissioners said they threatened the inspectors not just as inspectors, but as witnesses. They also rejected the testimony of the very officials deemed to be threatened:

“While Deputy Chief Donovan and Captain Arsenault did not testify that they personally felt apprehensive or otherwise fearful that Ms. Courtney would actually cause them economic injury, that is not the question but is instead an objective inquiry of whether a reasonable person would have felt threatened.”

In their Thursday findings, the ABCC commissioners found the UpperWest owners had “undoubtedly hindered and delayed the investigation by the authorized agents of the local board into the use of candles at the licensed premises” by arguing with inspectors.

“Courtney threatened two Cambridge Fire Department officials with retaliation by means of economic injury against their professional careers,” the ABCC commissioners said, stressing that a threat to retaliate “by causing economic injury” – by filing a complaint with the city – constituted a crime.

Strikingly, there are entire bodies of municipal government or offices within municipal government in place to hear complaints against employees, such as the police department’s Professional Standards Unit and the Police Review & Advisory Board. The ABCC ruling seems to set a precedent that telling a municipal safety worker that they will regret their behavior, including misapplication of a law, constitutes a punishable threat against that worker, because it risks “causing economic injury.”

Bourquin noted that in fact it was UpperWest that faced economic injury. Not only did the owners face a shutdown, but police turned away customers when they thought the bar was going to be shut down for the night.

The ABCC decision “punish[es] protected speech by the owners who merely strongly, peacefully and accurately objected to wrongful government action which posed an immediate threat to their livelihood,” Bourquin said.

The commissioners set up a faceoff over freedom of speech issues by citing five state and federal cases they consider to be precedent setting and saying without explanation that their findings Thursday “do not implicate First Amendment or [other freedom of speech] concerns.”

That’s not how Bourquin sees it.

“This case raises serious constitutional issues, particularly with regard to free speech,” Bourquin said. “This decision flies in the face of the fundamental constitutional right of all residents to speak truth to governmental authorities who have a duty to uphold, not break, the law.”

It is also unclear what precedents the ABCC commissioners find in their five cited cases, which include “Fulmer,” which explores what makes for a “serious expression of intent to harm or assault”; “Robinson v. Bradley,” in which a teacher said a student told her “If you come outside, I will beat you up”; “Sholley,” in which the threatener had been screaming “This means war! There’s going to be bloodshed all over the streets!” and talking about bombs and bloodshed; “Simeone,” in which the victim of threats said she’d been cursed at and told “You’re dead tonight” because a man said he’d come to her house and shoot at it; and “Cruz,” when police were rebuked for acting as though an apparent drug user had threatened them, a judge said, considering they “could not have reasonably feared for their safety considering the stop occurred during daylight, the defendant made no furtive or threatening movements, and the defendant was not known to the officers from previous arrests or a reputation for violence.”

In another potentially far-reaching aspect of the ABCC judgment, the commissioners used inaccurate testimony by police and fire officials while ignoring audio and video of their Sept. 29, 2018, visit submitted as evidence by UpperWest. In the reasoning of the commissioners, the evidence could be disregarded because “there is nothing to indicate that every word spoken was captured by the recordings” – but video as captured on the phones of victims or bystanders is used around the world as a safeguard against official misconduct.

“I’m outraged by the misrepresentation of our words and actions and the refusal by the ABCC to examine audio and video that was incontrovertible evidence that the city’s case was frivolous. How can the ABCC have evidence before them and instead believe the words of people who have an incentive to lie?” Courtney said Friday.

Dietrich indicated the UpperWest case should never have gotten so far, and that oversight is needed for the License Commission. “The City Council should be seriously questioning the professional competency of the individual city officials involved in bringing and enforcing these baseless charges against us,” he said. “We need accountability here.”

The 14-page finding by the ABCC makes repeated references to Courtney and Dietrich hindering the fire inspectors in their “investigation,” despite repeated testimony by fire and police officials that the bar owners never denied access to any part of the property – only that they argued over enforcement of a law the commissioners themselves deemed irrelevant. The state agency uses the plain meaning of the word “investigation.”

It is unclear what aspect of inspectors’ investigation the ABCC considered hindered, but the findings made no distinction between an investigation and the enforcement that follows.