City Council’s nine seats to be decided Tuesday from field of 22; links to info, Q&As are within 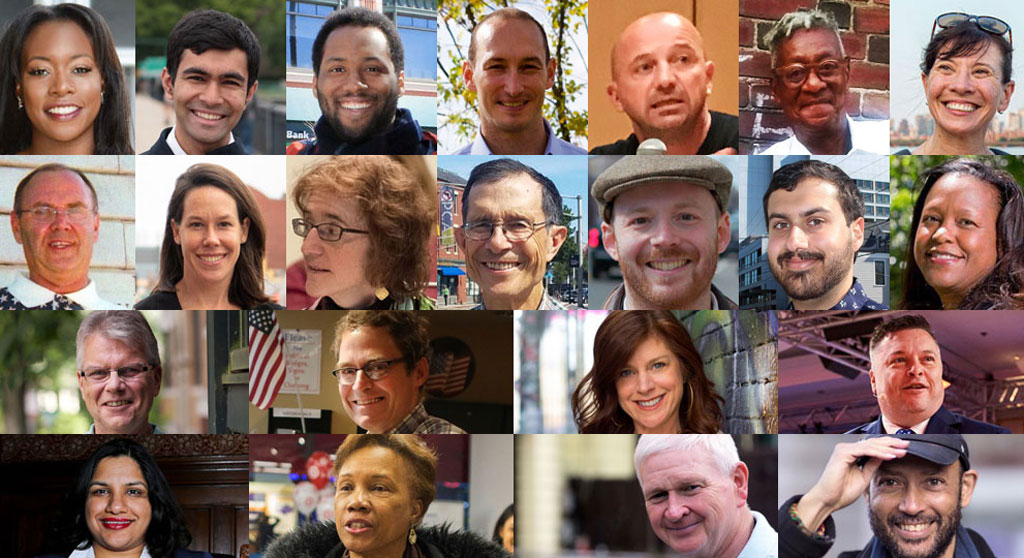 City Council’s nine seats to be decided Tuesday from field of 22; links to info, Q&As are within

There are 22 candidates for nine City Council seats. Click this photo collage for access to profiles of each. (Not all profiles may show up on the first page of results you see.)

The next City Council will deal with the results of a three-year Envision Cambridge master planning process, decide who sits (or continues to sit) in the City Manager’s Office and almost certainly see the return of an Affordable Housing Overlay zoning proposal, which was set aside by city councillors in September after months of citywide civil war. Who’s on that City Council will be decided in voting Tuesday.

There are 22 candidates running, including eight incumbents. With only vice mayor Jan Devereux having decided not to run for reelection, results (with a count starting at 8 p.m. Tuesday at the Citywide Senior Center, 806 Massachusetts Ave., Central Square) could be similar to many elections past, with just a rare new face appearing to help the city find its way through the ultimate in first-world problems: a city so rich that it’s hard to keep living here.

Profiles of all the candidates can be found here or by clicking on the photo collage of candidates found above. (Take note that all profiles will not appear on a single page of results.)

The 22 candidate profiles posted on Cambridge Day include some basic information and links to online materials provided by the candidates themselves – their websites and social media accounts. Voters still looking for more information can use the resources of Cambridge Community Television, who extended an invitation to all candidates to record personal statements at cctvcambridge.org/candidates and captures candidate forums that can be watched at cctvcambridge.org/elections. Candidate responses on our profile pages came from these forums.

No seat is guaranteed safe, and the list of challengers is packed with names and faces familiar to people citywide, with many campaigns dating back to before nomination papers could be filed. Among the more establishment candidates, Patty Nolan could make as smooth a transition from the School Committee as Marc McGovern did two terms ago; Nicola Williams is an ubiquitous presence among the business community, and Adriane Musgrave served as head of the Cambridge Local First small business group; Risa Mednick is at least as well known from her work in the nonprofit sector; and John Pitkin has been among the city’s most prominent environmental leaders.

There are also plenty of newcomers who have made strong arguments for their candidacies, some with the advantage of being active in local politics from before campaign season was a thing – Charles Franklin for his work on municipal broadband and Ben Simon emerging from the fight for the arts after the closing of the EMF Building, just to name a couple.

This pool of candidates is large, but smaller than the past election season, which had 26 candidates for council, and it’s far from the largest Cambridge has seen. In 1941, there were 83 candidates running for City Council; races with candidates numbering in the 30s were not uncommon in the 1950s and 1970s. They are elected via Cambridge’s rare form of ranked voting, this year with a changed ballot design: In the past, voters were allowed to rank the full roster of candidates from first choice to, for instance, the 26 council candidates of 2017; this year the ballots allow rankings from first to 15th choice. Election experts say tests of past elections show results don’t change with only 15 rankings allowed.

Of the six candidate forums held this season, fully half were focused on housing and related issues, including those run by A Better Cambridge and the Cambridge Economic Opportunity Committee and YWCA. The third, run by the Cambridge Citizens Coalition, is further notable in that the coalition was formed because of the Affordable Housing Overlay proposal that makes so many appearances in the forums and their Q&A. Whereas past elections had seen A Better Cambridge and Cambridge Residents Alliance in opposite corners of the development fight, the coalition stepped immediately in front of the CRA to demand attention.

The messiness of the overlay and the ensuing fight over it can be seen by browsing the candidate profiles or by having attended those forums – where there is no agreement in campaign rhetoric over how many units the overlay might create, and candidates used whatever figure they may have picked up from months of city brochures, political group press releases, council dialogue or public comment. The proposal was notoriously explicit about not being able to promise that new affordable housing would result, which complicated discussion even more.

Setting aside the overlay was an anticlimax to a proposal that has roiled the public for a year, bringing emotional public comment to a seemingly endless series of meetings, a stream of controversial flyers and plenty of debate among the public and officials. In November, councillor Quinton Zondervan and vice mayor Jan Devereux even passed a policy order seeking to downplay the overlay because argument about it was overshadowing the bulk of the Envision Cambridge master planning process.

But in 2020, it looks the overlay and the rest of Envision Cambridge will be back more or less together. If voters didn’t get enough on the topic of housing during campaign season, they can prepare themselves to hear much, much more.

In past elections, each Cambridge Day candidate profile included “one view” of the candidate – an assessment of strengths and weaknesses as observed from their work in civic life in the recent past and from the campaign trail. Those short takes don’t appear on these candidate profiles, though a version may be added to the free Cambridge Day email newsletter, which is sent Sundays.