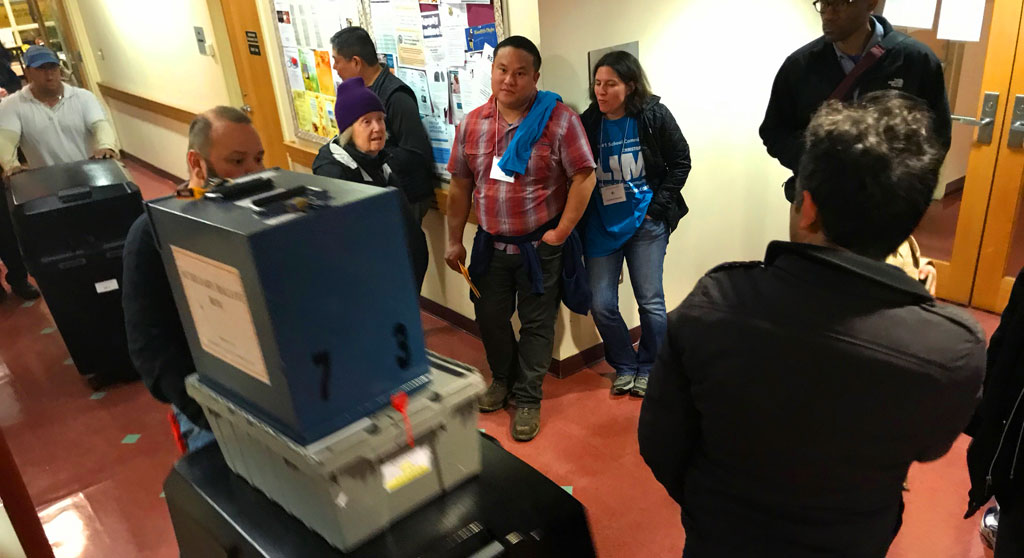 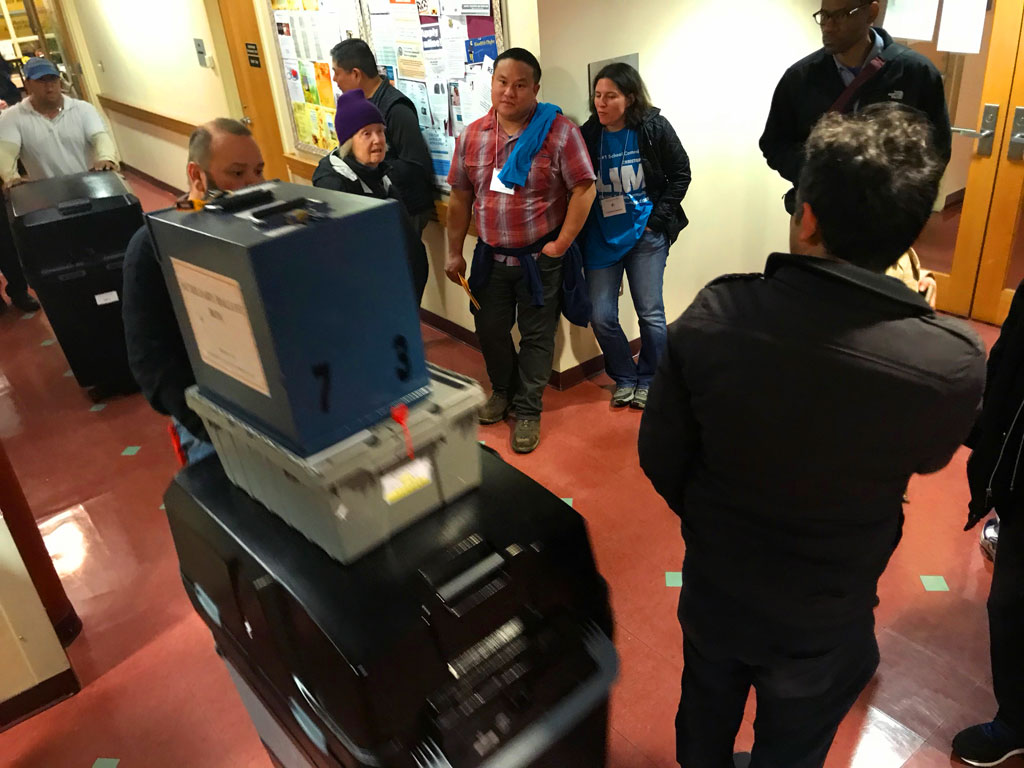 It would mean a departure from the council for Craig Kelley after seven terms, but Carlone ended the night ahead of Kelley by only 39 votes, and there are 888 auxiliary ballots remaining to be counted. That count is to take place Wednesday.

On the School Committee side, challengers Ayesha Wilson, Jose Luis Rojas Villarreal and Rachel Weinstein were announced preliminarily as joining all the incumbents running to regain their seats: Manikka Bowman, Emily Dexter and Fred Fantini.

It was a true sound-and-fury moment – signifying not much on the council side, as so many incumbents returned – for a campaign season universally regarded as the most toxic at least since the end of rent control in 1994, with much of the war being fought over social media and the occasional mailing.

“One of the nastiest elections I have seen,” former state Rep. Alice Wolf summed up on Cambridge Community Television. “I feel really pissed that some of our elected officials are being described as on the take.” She blamed both an approach more typical of national politics “filtering down” into local elections and the effect of social media, where “we don’t know how to use it yet. People say things [there] that they wouldn’t say to people.”

“We’re a world city, a model city, and it hurts me,” the Rev. Irene Monroe said in conversation with Wolf.

Before results were announced, Nolan, a candidate making the transition to the council from the School Committee, could be heard in the crowded corridor outside the vote count floor upbraiding a political activist. “I was personally attacked. It’s not okay,” Nolan said, asking if the venom would stop.

But Frank Gerratana, a lawyer active in Cambridge campaigns, quipped online, “The best part of Cambridge politics Twitter is that we argue furiously with people we mostly agree with, and then we angrily storm off to the polls to vote for mostly the same candidates in a slightly different order.”

In the council race, the “quota” needed to be elected in Cambridge’s proportional representation form of voting was 2,044. On the School Committee side, quota was 2,684. 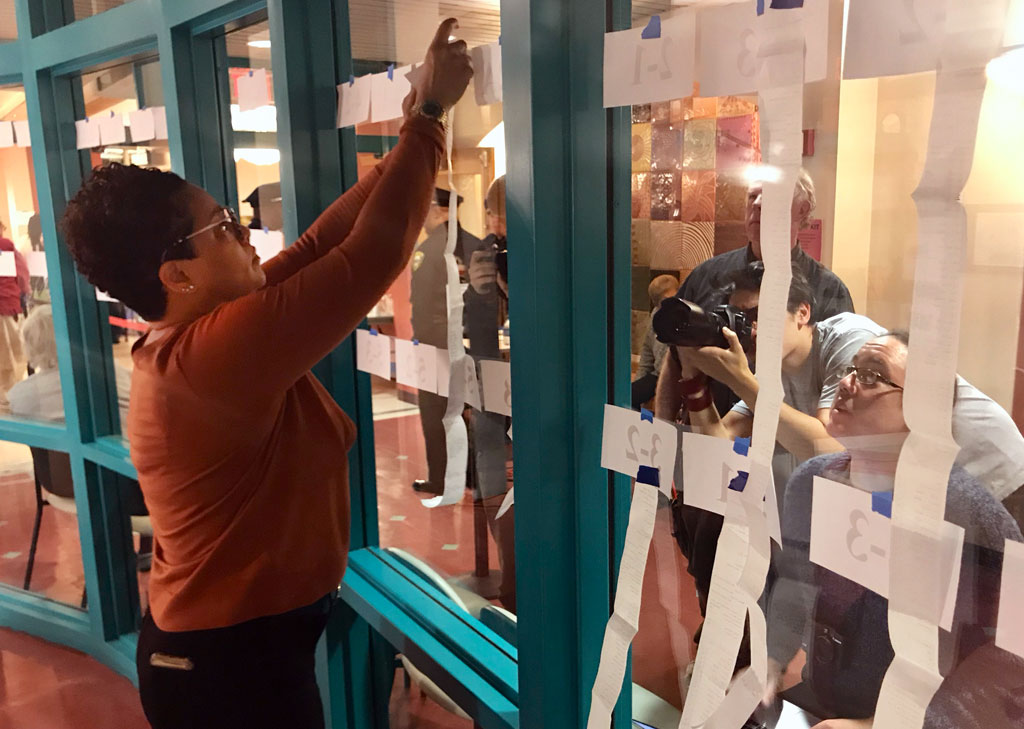 Results were announced at 10:46 p.m., more than three hours earlier than in 2017, when there was a lengthy delay from a memory card error on voting machines seeing their last year of service. This year saw new voting machines rolled out citywide – to complaints about their slowness and reports that backed-up lines forced some residents to walk away frustrated to get to their businesses. By one account, a scan of a ballot takes 17 seconds, up from perhaps as short as 3 seconds with the older machines.

This year also saw the introduction of a changed ballot design for Cambridge’s ranked voting: In the past, voters were allowed to rank the full roster of candidates from first choice to, for instance, the 26 council candidates of two years ago; now ballots allow from first to 15th choice. Election experts said tests of past elections showed results didn’t change with only 15 rankings allowed.

Election Commission officials also posted tapes of No. 1 votes in a prominent window of the Citywide Senior Center in Central Square so people could get an early sense of voting trends – another innovation for the year. The ability to watch ballot transfers happen in real time by video screen, a digital version of the hand counts people would gather to watch before computers were introduced, was hoped to begin this year too, said Tanya Ford, executive director of the Election Commission. But now the screen is expected for the next election.

The first box of ballots arrived at around 8:49 p.m. to the counting room at the Citywide Senior Center in Central Square, beating last year’s arrival by only six minutes. All ballots had arrived by shortly after 10:31 p.m., which was 16 minutes behind last year. But with no broken memory cards, things then went faster.

Election Commissioners pulled the preliminary results from 20,433 ballots considered valid for City Council, and 18,782 for School Committee. There were 68,795 registered voters, making for turnout of around 30 percent.

Last year’s election saw fewer registered voters but more cast ballots and turnout – of 66,318 registered voters, there were 22,524 valid ballots for an official turnout of 34 percent, up by about 16 percent from prior municipal elections – as well as a larger number of candidates, several saying they were inspired to run by the shock and ugliness of seeing Donald Trump elected president.

The number of people running for office ebbed a bit this year to 22 candidates for council from the previous election’s 26 (which sounds like a lot, but 29 ran in 1993, and in 1941 there were 83 candidates running for City Council; races with candidates numbering in the 30s were not uncommon in the 1950s and 1970s.) On the School Committee side, the 11 candidates in this election was a drop of one from 2017. 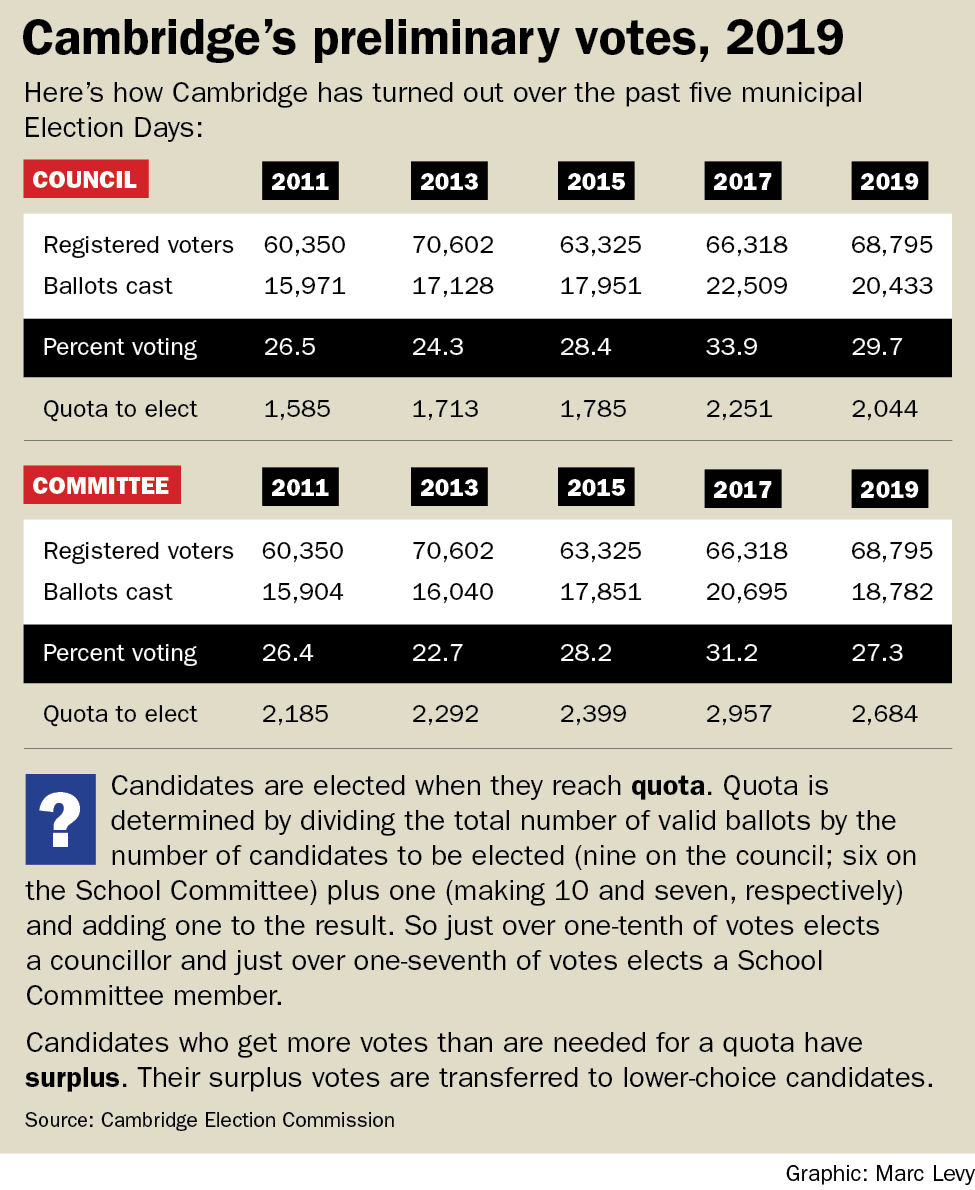 There was also fluctuation on the part of incumbents: In 2017, it was the council that saw three incumbents opt against reelection runs (Leland Cheung, David Maher and Nadeem Mazen, which made room for Mallon, Siddiqui and Zondervan), but this year only vice mayor Jan Devereux decided against a run. On the School Committee side, all incumbents decided to run again in 2017 except for one (Richard Harding, making way for Laurance Kimbrough to join), while this year saw three incumbents move on: Nolan, running for council after seven committee terms; Kathleen Kelly; and Kimbrough.

Last year saw a nail-biter around whether Craig Kelley would survive to a seventh term, with election workers leaving shortly before 2 a.m. with only a three-vote margin between Kelley and challenger Sean Tierney. But a daylong hand count of “auxiliary” ballots tilted in Kelley’s favor.

In this case, it was clear fairly early on that it would be a good year for incumbents. The election of Sobrinho-Wheeler was greeted with whoops of surprised at the Senior Center.

The council will deal with the results of a three-year Envision Cambridge master planning process, decide who sits (or continues to sit) in the City Manager’s Office and almost certainly see the return of an Affordable Housing Overlay zoning proposal, which was set aside by city councillors in September after months of citywide civil war. The School Committee is likely to oversee implementation of universal pre-kindergarten, grapple with an intractable academic achievement gap and likely recurring racial tensions based around not just that gap and standardized test results, but the goals set by the district for racial and ethnic subgroups. Vocational learning is likely to get a look, and also whether growing student populations demand a new school.

Election results brought jubilation on the part of the group A Better Cambridge and others pushing for the swift construction of more affordable housing and more housing units in general, who realized that the election meant that the Affordable Housing Overlay would now pass when returned the council – as soon as January.

But whether civic discourse would become more, well, civic was hard to tell in online reactions to election results. Housing advocate Christopher Schmidt first sent out to the Twitterverse and to the opposing Cambridge Citizens Coalition, “Hey, you know what? The A Better Cambridge Action Find was targeting six pro-overlay votes. Which we just got. Fuck you, CCC.” But when the euphoria wore off, he deleted the tweet.

“The phrasing of that tweet was impolite and ill-advised … it came from a place of expression of some of the emotional frustration I’ve felt over the past six months. I apologize for my phrasing, and would not say it again,” Schmidt said on Twitter, in language reflected in an comment on this story. “I hope that I won’t be judged by many people solely for my most impolite moments.”

After the deadline for overseas absentee ballots passes in mid-November, vote counts will be made official.

This post has been updated throughout since the initial version, with details, quotes and graphics.