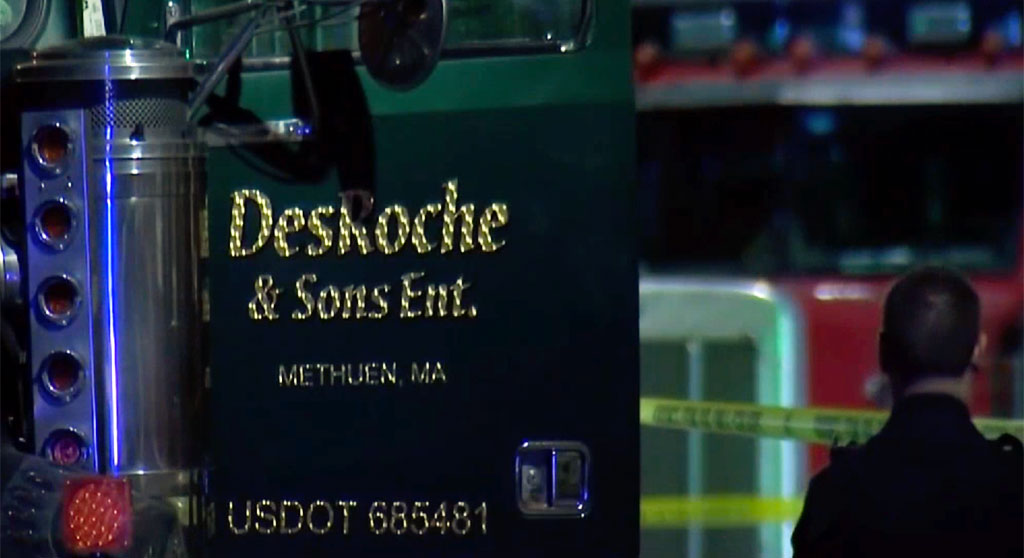 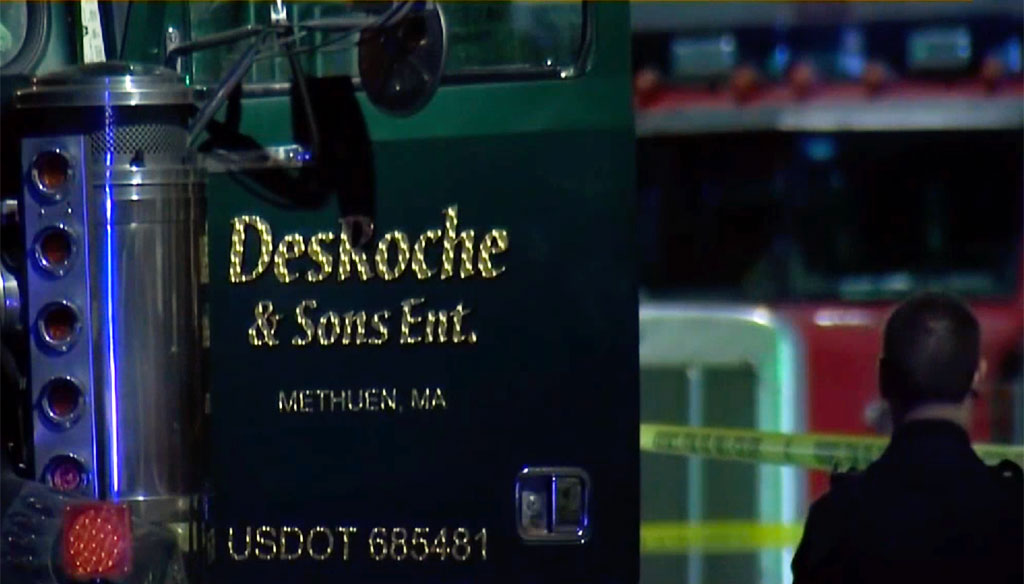 The truck involved in an Oct. 5, 2018, pedestrian death in Cambridgeport has a dysfunctional backup camera, according to Monday court testimony. (Image: NBCBoston)

The dump truck that ran over and killed a 27-year-old woman walking behind it in Cambridgeport last year was equipped with a camera designed to let a driver see behind the vehicle – but the camera was not working, it was revealed Monday.

The disclosure came on the first day of the trial of truck driver and owner Daniel Desroche, 54, of Methuen, who is charged with vehicular homicide by means of negligent driving. Desroche was backing his truck on Putnam Avenue through the intersection at Magazine Street on Oct. 5, 2018, when he hit Jie Zhao as she crossed Putnam behind the truck. After striking her, he stopped and drove forward, hitting her again, according to police.

Dump trucks and other big trucks have large blind spots behind the vehicles. Some trucks have cameras to help drivers see the area to the rear, similar to backup cameras that have become common on cars. Trucks are not required to have the cameras.

Middlesex Assistant District Attorney Ashlee Mastrangelo said she wanted to present evidence of the camera only to show that “it was added because you could not see behind the truck … I will not argue that [Desroche] should have had one.” District Court Judge Michele B. Hogan said she would allow limited evidence about the camera.

The argument occurred before the eight-person jury was chosen and before testimony. It took about an hour and 30 minutes to select the jury of four women and four men. Besides answering questions about their ability to be impartial, jurors were asked whether they or anyone close to them supported organizations advocating for bicyclists and pedestrians, and whether they or family members or friends had been in car crashes resulting in injuries.

Shortly before her death, Zhao had bought a condominium on Chestnut Street and celebrated her 27th birthday. She emigrated to the United States at 14 and lived with her mother in Waukesha, Wisconsin, then moved to Cambridge to attend the Massachusetts Institute of Technology. After graduation she worked for HubSpot, the Cambridge-based company that helps other companies attract customers through online marketing.

Desroche operated his family trucking business and drove a truck his entire working life, his lawyer said. The crash was “a tragedy” but not a crime, Ranta said.

Another truck driver, Patrick Annese, was traveling behind Desroche to the same job paving on Pearl Street. He told police that Desroche asked him to check if the intersection was clear before Desroche backed up. Annese radioed Desroche to stop when he saw Zhao step off the curb, but Desroche continued to back up, police said. In a second interview with police, Annese said he told Desroche when he stopped, “I can’t believe you ran over her”; then Desroche drove forward and hit Zhao again.

A State Police analysis of the accident concluded that Desroche could not have avoided the crash and blamed Zhao for entering the roadway, suggesting that she may have been wearing earbuds and thus inattentive. Earbuds were found near her body. The State Police report relied on measurements at the scene and did not mention witness interviews.

This post was updated Nov. 20, 2019, to make the headline potentially less confusing.