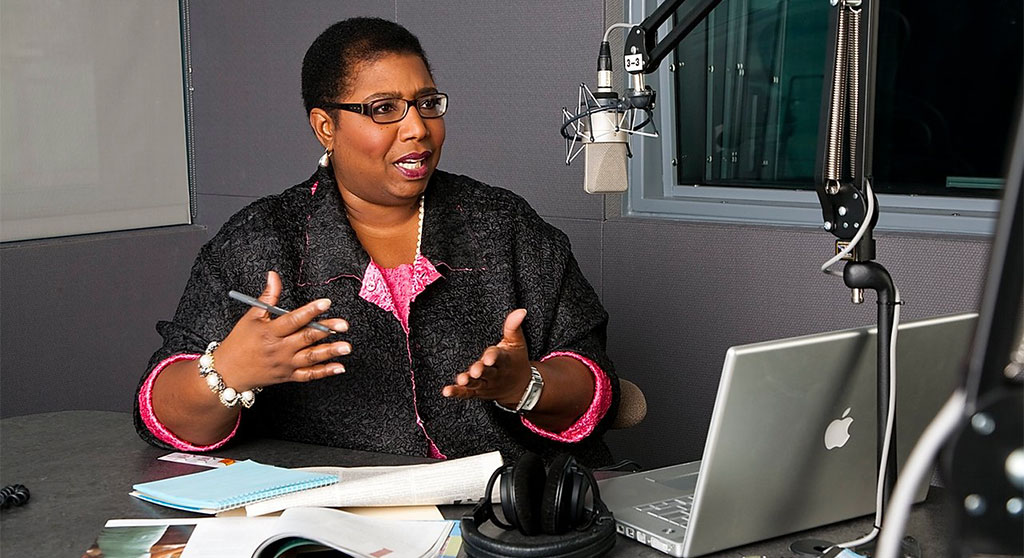 Joanne Chang talks about “Pastry Love: A Baker’s Journal of Favorite Recipes” from 7 to 8 p.m. at the Harvard Book Store, 1256 Massachusetts Ave., Harvard Square. Free. Chang, the James Beard Award–winning baker and co-owner of Flour Bakery+Cafe and Myers+Chang, brings in her latest cookbook, called her most personal and comprehensive yet, with 125 dessert recipes, includes some for things she could never serve in a bakery. Information is here.

The Atwood’s Interview Series talks with Callie Crossley from 7:30 to 9 p.m. at Atwood’s Tavern, 877 Cambridge St., East Cambridge. Free. Arjun Singh introduces a series of discussions with journalists, authors, local politicians, artists, musicians and specialists of all sorts with Callie Crossley – host of “Under the Radar” on WGBH and a regular commenter and contributor on Boston Public Radio, “Morning Edition” and “Beat The Press.” Information is here.

Singer-Songwriter Night XXIX from 8:30 to 11:30 p.m. at ZuZu, 474 Massachusetts Ave., Central Square. Admission is $7 for this 21-plus show. Local acts perform 40-minute sets, this time including Will Lenk, Mark McCarthy and Jacob McCurdy. Information is here.

January Dispatches: Boston Sci-Fi Film Fest Best of Fest 2019 from 7:30 to 9 p.m. at the Somerville Theatre, 55 Davis Square. Tickets are $11. Six of the best short films from last year’s festival are screened to whet appetites for the 45th festival, coming in February. Look for “The Masseuse” by Ce Ding Tan, “8:27” by Matthias Kreter, “Space Between Stars” by Samuel W. Bradley, “The Last Dance” by Oliver Milburn, “Amicae Aeternum” by David Graham Tennant and “Metta Via” by Warren Flanagan. Information is here.

The Human Variety Hour from 7:30 to 10:30 p.m. at The Lizard Lounge, 1667 Massachusetts Ave., between Harvard and Porter squares. Tickets are $7 in advance (with fees, $8.34), or $10 at the door for this 21-plus show. An inclusive live variety show premieres from hosts and producers Ryan Thomas and Allie Genereux, starting out with comedians Jai Demeule, Ryan Ellington, Melissa Parvo, Theo Konstantino and Alexandria Cartwright and musical guest Andrew Eckel. The house band is Love Love. Information is here.

Kyle Lopez at the Boston Poetry Slam, from 8 p.m. to midnight at The Cantab Lounge, 738 Massachusetts Ave., Central Square. There’s a $3 cover for this 18-plus show. Lopez, a Cuban American poet from North Jersey, master’s candidate in poetry at New York University and reader for Homology Lit, reads after an hour of open mic starting at 8 p.m. After Lopez comes a speed slam event. Information is here.

Cracker and Camper Van Beethoven play at 7 p.m. in The Middle East Downstairs, 480 Massachusetts Ave., Central Square. Tickets are $22 in advance or $25 on the day of the (18-plus) show. Yes, this is now an annual thing. These linked bands made the 1980s and 1990s tolerable for a certain kind of person – in large part, the smart-asses among us – but there’s no denying they produced some classic songs hitting notes from Southern to psychedelic, such as “Take the Skinheads Bowling,” “Low” and “Euro-Trash Girl.” The bands each get sets in a classic Cambridge music venue, just like last year at this time. Information is here.

BCMFest of Irish, Scottish, Cape Breton and other Celtic music from 7 to 9 p.m. and 10 p.m. to midnight (and continuing through Sunday afternoon) in Harvard Square. There are some free events; tickets are $10 to $25 and sold by different venues, depending on the show. The area’s twice-annual homegrown celebration of Celtic music and dance marks its 17th year, with dozens of performances over the course of a weekend – including a Dayfest with nine-plus hours of music Saturday – at Club Passim, 47 Palmer St.; the Atrium on the fourth floor of 50 Church St.; and at The Sinclair, 52 Church St. The weekend includes workshops as well as performances. Information is here.

Patricia Marx and Roz Chast present “You Can Only Yell at Me for One Thing at a Time: Rules For Couples” at 7:30 p.m. at The Center for Arts at the Armory, 191 Highland Ave., Somerville. Tickets are $37 and include a copy of the book. Marx, of the Harvard Lampoon, New Yorker, “Saturday Night Live” and “Rugrats,” and Chast, the legendary cartoonist, are in town to promote their illustrated collection of love and relationship advice such as “If you must breathe, don’t breathe so loudly” and “Queen-sized beds, king-sized blankets.” Information is here.

Bob Garfield reads from “American Manifesto” from 7 to 8 p.m. at the Harvard Book Store, 1256 Massachusetts Ave., Harvard Square. Free. The co-host of WNYC’s “On the Media” looks at where the virus of Donald Trump has been incubating for the past several decades – in the tragic confluence of an American preoccupation with identity and the catastrophic disintegration of the mass media. The book bears the subhead (and mission) of “Saving Democracy from Villains, Vandals, and Ourselves.” Information is here.

“The Pirates of Penzance” from 7 to 9 p.m. (and repeating Saturday) at The Rockwell, 255 Elm St., Davis Square, Somerville. Tickets are $15. The Yorick Ensemble, which has a mission of producing “thoughtful pieces” focused on millennial artists and audience members and “that may be too weird for other nonprofessional theaters” promises a debut production of Gilbert and Sullivan’s comedy that, as directed and choreographed by Josh Telepman, will be as you’ve never seen it. Information is here.

Film Friday: “Star Trek Voyager” 25th Anniversary screening from 7 to 9 p.m. at CultureHouse, 500 Kendall St., Kendall Square. Free. CultureHousers say that even people unfamiliar with this series can still enjoy a look back at its premiere episode, which has “solid sci fi, a feminist nod and so much more.” Free tea and popcorn, too. Information is here.

BCMFest of Irish, Scottish, Cape Breton and other Celtic music from 7 to midnight (and continuing through Sunday afternoon) in Harvard Square. There are some free events; tickets are $10 to $25 and sold by different venues, depending on the show. Information is here.

“Joyful Noise” with the Harlem Gospel Choir from 7:30 to 9:30 p.m. at the Sanders Theatre, 45 Quincy St., near Harvard Square. Tickets are $12 to $56. The acclaimed choir honors the life and legacy of the Rev. Dr. Martin Luther King Jr. Information is here.

“Viola, Viola!” Mozart and Brahms viola quintets from 8 to 10 p.m. at the Harvard-Epworth United Methodist Church, 1555 Massachusetts Ave., Harvard Square. Tickets are $25 (with fees, $27.24). The Sarasa Chamber Music Ensemble performs Mozart’s String Quintet No. 4 in G minor, K. 516, and Brahms’ String Quintet No. 2 in G Major, Op. 111, indulging in a combination of two violins, two violas and cello that highlights “the beauty of the middle voice.” Information is here.

“Songs of Prisoners of War” from 8 to 10:30 p.m. at the Longy School of Music, 27 Garden St., Harvard Square. General admission is $30. Information is here. Boston Musica Viva has commissioned “The Last March,” a world premiere work by Estonian American composer Jonas Tarm, and will also perform the Northeast premiere of a trio by Brian Nabors; Joseph Schwantner’s “Sleep Now” (a 2018 commission for the group) and Fabio Vacchi’s “Canti di Benjaminovo” (a 2003 commission) with mezzo-soprano Krista River. Information is here.

BCMFest of Irish, Scottish, Cape Breton and other Celtic music from 10 a.m. to 9:30 p.m. (and continuing through Sunday afternoon) in Harvard Square. There are some free events; tickets are $10 to $25 and sold by different venues, depending on the show. Information is here.

“Give Peace a Chance” music video shoot from noon to 2 p.m. in Davis Square. Free. The Boston rock band Kooked Out has rewritten the lyrics to John Lennon’s peace anthem (“Everybody’s talking about assassination, escalation, retaliation …”) and wants to gather 1,000 people of all sorts to “sing this as loud as they can together in unison,” followed by an outdoor performance. Information is here. This event was canceled Sunday due to the weather.

Stories From The African-American Heritage Trail from 1 to 2:30 p.m. at Mount Auburn Cemetery, 580 Mount Auburn St., West Cambridge. General admission is $12. Volunteer docent Stephen Pinkerton examines the lives and times of African Americans buried at the cemetery who were born into slavery and fled to the North to forge lives as free citizens – followed by a short walking tour, weather permitting. Information is here.

BCMFest of Irish, Scottish, Cape Breton and other Celtic music from 10 a.m. to 2 p.m. (and continuing through Sunday afternoon) in Harvard Square. There are some free events; tickets are $10 to $25 and sold by different venues, depending on the show. Information is here.

This post was updated Jan. 19, 2020, to show that the “Give Peace a Chance” music video shoot has been canceled until there is better weather.