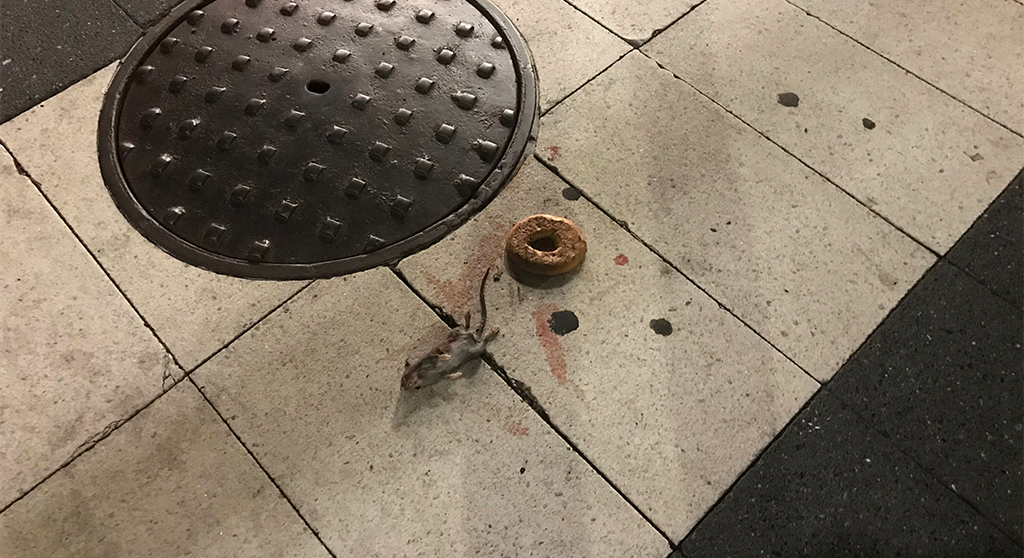 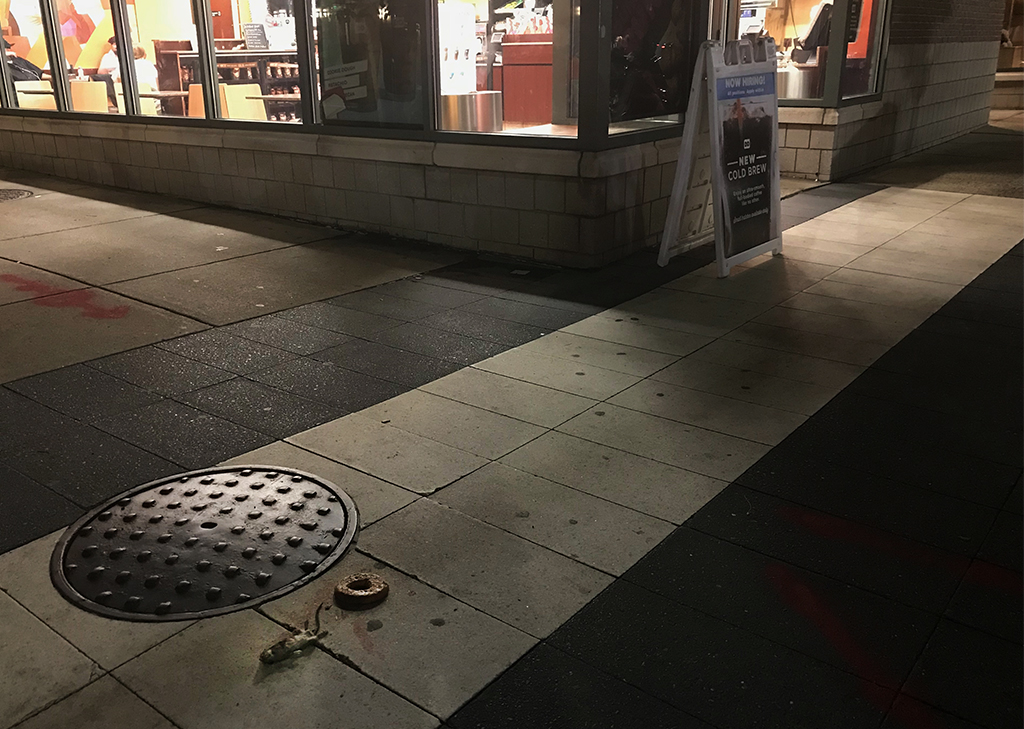 A dead rat and a doughnut make for grim street art on a Porter Square sidewalk in August 2018. (Photo: Marc Levy)

With a war against rats going in favor of the rats, the city is replacing Cambridge Street and Harvard Square open-top garbage cans with enclosed Big Belly compactors and thinking about escalation: buying rodent-resistant trash barrels for every household.

“With all the work we’re doing, we’re still losing the battle,” City Manager Louis A. DePasquale told city councillors Monday. “This is all hands on deck. We’re trying to do everything possible, because it is a real concern, but we need to think outside the box if we’re going to solve this.”

In this case, thinking outside the box means looking across the town line to Somerville, where Mayor Joe Curtatone has reported some success against rat infestations by buying approved trash barrels for residents. “It’s something we’ve talked about for a while,” DePasquale said, and Cambridge’s Department of Public Works is looking into it.

Rats are not a new problem in either densely populated city, where rounds of construction regularly roust the animals from their burrows. The council’s Ordinance Committee took horrifying testimony in 2005 of rats “dripping out of the heaters” and forcing families to sleep in hallways, but a renewed assault in 2013 had councillors again turning to the City Manager’s Office for a solution. Fifteen years ago, under city manager Robert W. Healy, the office resisted the “huge cost” that might come from helping people buy and use rat-proof garbage containers.

Now, as councillors hint at new horror stories, such as East Cambridge woman forced to stop gardening after 30 years, the city is looking at new solutions and being asked to consider others; Tim Toomey, calling rats “an overwhelming issue” for many, urged $1,000 daily fines for absentee landlords who don’t keep their property clean.

While a citywide rollout of new barrels is considered, Public Works will oversee installation of new Big Belly solar-powered trash compactors like the 50 to 60 deployed in Central Square. They store five times the waste of the current Victor Stanley trash cans, need fewer cleanings and are rodent-resistant, and even have sensors that say when they’re full and need to be emptied, department commissioner Owen O’Riordan said. The plan for the coming fall is to install 40 of them along a 20-block stretch of Cambridge street, from Inman Square to First Street, replacing some 85 open-top public area bins. The new models will be the “double-wides” that include recycling next to the compactors.

The problem is with the Bigbelly company, which is local – based in Needham – but so successful that Cambridge is too small a player to keep its attention, O’Riordan said. “They’re worldwide and sometimes it’s rather difficult get their attention for small additional deployments,” he said. The city has considered getting on a regular replacement schedule to counteract that and has bought from a South Korean company making a barrel similar to the Big Belly, “extraordinarily expensive” at more than $4,000 a unit.

“We’re hoping that the idea of competition in and of itself will grab their attention in the short term,” O’Riordan said. “As of yet, that hasn’t happened.”