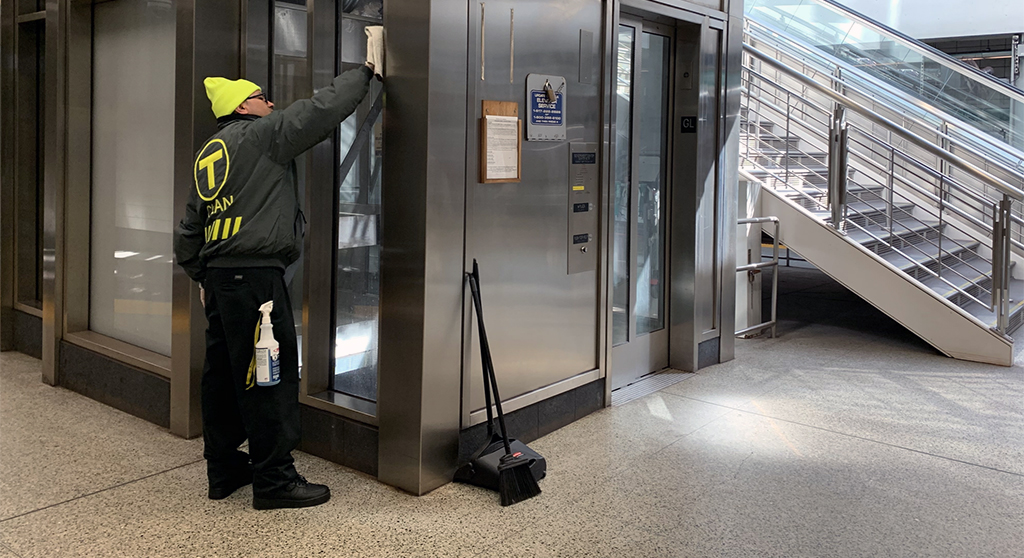 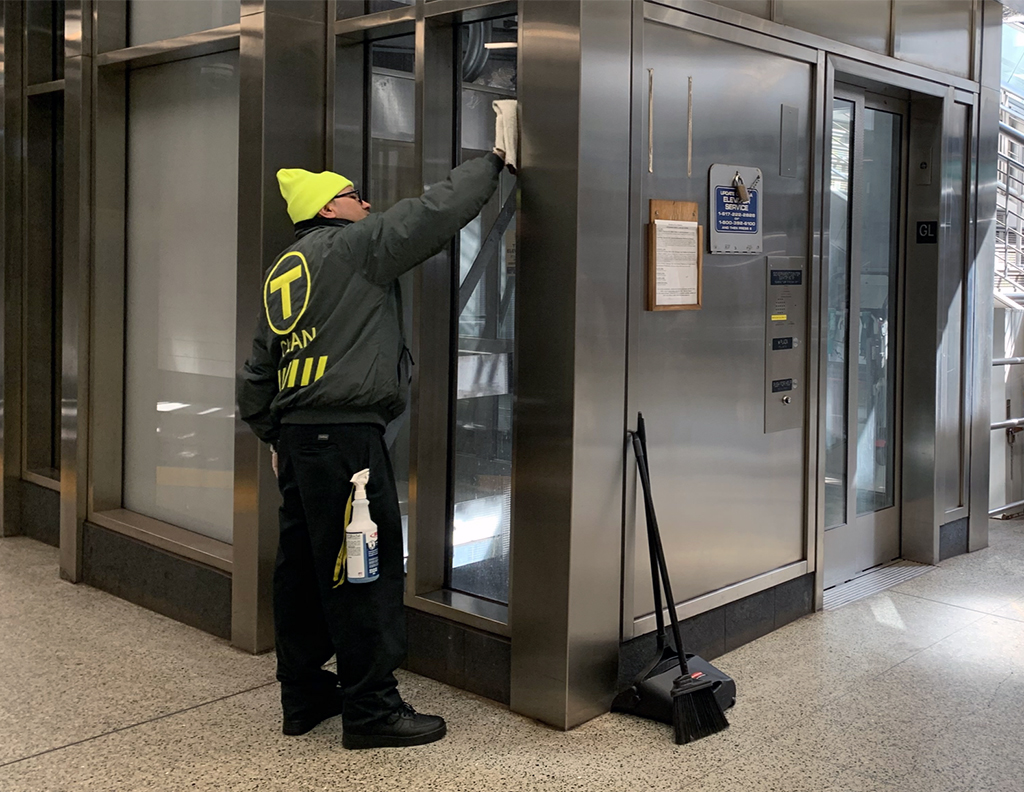 The MBTA released images March 5 of its extra efforts to sanitize stations in light of coronavirus outbreaks. (Photo: MBTA via Twitter)

What’s new with the coronavirus? Cambridge city and school officials were largely business as usual even as institutions around them and the city took dramatic steps against the spread of infection, including universities, winter markets, the Cambridge Housing Authority and many cultural events.

The conferences attract as many as 7,000 attendees, according to posted reports.

The councillors returned (“Coming into a practically empty Logan Airport is a bit stunning,” Nolan remarked via social media) in time for a 5:30 p.m. Thursday heading on whether to extend the contract of City Manager Louis A. DePasquale.

The Cambridge Community Foundation came to the same conclusion as D.C. health officials, announcing Wednesday that its We are Cambridge Celebration, coming April 16, would be rescheduled to the latter part of 2020. The foundation was working with the Boston Marriott Cambridge to secure a date, leaders said.

Schools: Cambridge Public Schools remain open. An unusual note Wednesday from the school district clarified it, as officials knew there was confusion from declaration of a statewide emergency. “We will notify you of any changes. Please assume schools are open,” the note said. On Thursday, Superintendent Kenneth Salim presents the district’s proposed budget to the School Committee at a 6 p.m. special meeting Note that the draft budget should be available for download shortly before the meeting begins.

Tufts University caught up late Tuesday with emergency steps taken by Harvard and the Massachusetts Institute of Technology, saying it would hold all classes online starting March 25 after spring break, with all students in residence halls expected to pack up and leave by Monday.

At Lesley University, spring break, ongoing this week, has been extended to March 22 with the expectation that all classes from March 23 onward will be held online, the school said Wednesday afternoon. “We will monitor the situation with the hope that we can return to in-person instruction before the end of the semester,” according to the announcement. “We are working on the implications of this shift for studio courses, labs, internships … and other types of courses or activities.”

After the decision to cancel in-person classes at Harvard, a GoFundMe was launched by a nonprofit called Harvard First Generation Alumni to help low-income students navigate expenses such as travel, housing and storage in the months ahead, as well as make up for lost campus-job income. The campaign raised $16,145 of a $25,000 in just eight hours, then doubled the goal to $50,000 when it neared the original amount within just a dozen hours.

Some protests and appeals followed university decisions, especially after a Google doc began circulating to help Harvard students caught by surprise by the campus shutdown. Siddiqui responded as well, urging people following her on social media: “If you or someone you know is unable to find housing because of your college or university’s policies surrounding Covid-19, please contact my office.” She said people could call (617) 448-1525 or even direct message her on Twitter.

Business: Moderna Therapeutics, a Cambridge biotech, was big in business news this week for shipping the first batch of a coronavirus vaccine for tested by the National Institute of Allergy and Infectious Diseases. The batch, shipped in February, could mean a vaccine sometime in 2021; eight other companies are working on vaccines as well.

Cambridge Housing Authority: All Tuesday and Thursday legal, waitlist and Transition House walk-in hours are canceled for 30 days, the agency announced Wednesday, though that period “will be subject to further evaluation or change.” Personnel will meet only with scheduled appointments, and make “every possible effort” to conduct business over the phone or by email, spokesman Luis Vasquez said.

Winter markets canceled: The remaining weeks of the Cambridge Winter Farmers Market are canceled, including this weekend, organizers said. “We cannot take risks, given how contagious this virus is proving to be. Additionally, the Cambridge Community Center – where the market is held – is home to many other programs, and continuing to hold the market would put participants of those programs at risk too,” they said. Noting the financial impact on the vendors, organizers encouraged buyers to patronize small businesses and buy local, pointing to Pemberton Farms in North Cambridge as carrying locally sourced produce and the continuation, at least for now, of the Charles River Farmers Market in Harvard Square and Somerville Winter Farmers Market.

Transportation: Although state transportation officials canceled public meetings this week, including on the green line extension and Lechmere station, the system is up and running as usual – but with vows to disinfect all of the buses, trains, subways and other vehicles daily. Amtrak promised “enhanced cleaning protocols” and increased availability of sanitizers and disinfectant wipes for customers and employees throughout its trains and stations, and said it was waiving change fees on bookings made through April 30. Zipcar similarly said it was waiving reservations missed because of quarantines through April and had “upgraded our car-cleaning with antiviral and antimicrobial solutions and have deployed incremental sanitizing procedures.” Lyft promised that drivers testing positive for Covid-19 would be suspended until they were medically cleared, but those drivers would be supported financially “should they be diagnosed … or put under individual quarantine by a public health agency.”

Cultural events: Following the cancellation of Harvard Film Archive events through April, many A.R.T. and Oberon events have been postponed or canceled as well, including the 2020 A.R.T. Gala and Jade Sylvan’s “Beloved King,” a Biblical musical that was to have its premiere staged readings Wednesday and Thursday – but now will appear at an unknown later date. “To say I am disappointed is an understatement. I have poured nearly all of my available time, love, money and resources into this project for over two years,” Sylvan said via social media. “I feel better at least now knowing in my heart that this is the right thing to do.” The Boston Calendar, a listings website and newsletter run by Jim Martinho, said it would not post this week through email or social media. “We considered sharing only events with a small capacity, but ultimately don’t feel comfortable publicizing any event recommendations,” Martinho said, expressing regret to event organizers for whom the lack of publicity would be a financial hit. The site also maintains an ongoing list of canceled or postponed events.

Somerville: Three Somerville residents are “presumptive positive” for Covid-19 (needing verification from the Centers for Disease Control) after attending a Biogen conference in Boston in February. Schools, libraries and other public places are closing through the weekend for sanitization by the city’s Department of Public Works.

Arlington: A resident and their child, a Stratton Elementary School student, continue to recover from home after testing positive for coronavirus by the state lab. The school was closed for sanitization Monday and an estimated 30 students and staff were advised to self-isolate for two weeks. Arlington Public Schools said it would provide online learning technologies to students who miss school due to self-isolation, and no student or employee who must miss school will be penalized – with employee absences not be lodged against paid time off or sick time).

Brookline: Town Administrator Mel Kleckner said two adult residents had tested positive for Covid-19 and are in isolation; one is a parent of a child at a school that will close Thursday and Friday for sanitization. In addition, all nonessential public meetings and events in town or school facilities were prohibited through April 30, officials said Wednesday.