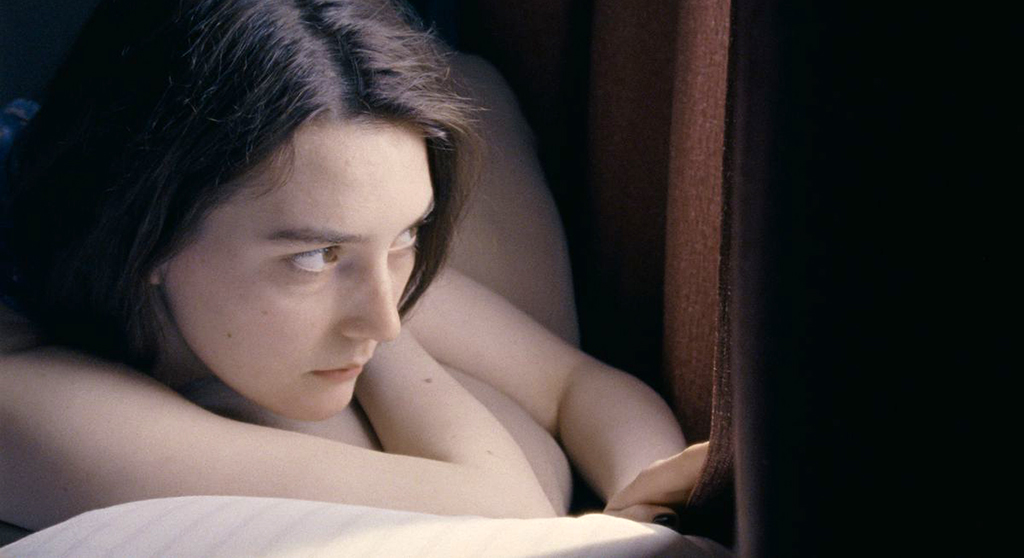 Eliza Hittman’s short list of films have focused on teens involved in strange sexual relations with adults, be it a girl looking to blossom by hooking up with a ruffian in “It Must be Love” (2013) or a boy in “Beach Rats” (2017) seeking to discover himself by meeting up with older men he encounters online. Hittman’s latest, “Never Rarely Sometimes Always,” is something more subtle, yet equally dark in its exploration. The narrative structure here is lean and simple, buoyed by emotional depth and a pair of outstanding performances.

We meet up with teen Autumn (newcomer Sidney Flanigan), who likes to play guitar and sing and hang out with her cousin, Skylar (Talia Ryder,) in a podunk Pennsylvania burg. After a talent show we learn that tensions are high between Autumn and her stepdad (Ryan Eggold), who seemingly has it out for the eldest in his house, and that Autumn is pregnant and heading into her second term. The identity of the father is never laid out explicitly – there are a few possibilities, such as one boy who heckles her during the talent show, or another who makes a lewd, public sexual comment in a pizza shop; there are other less pleasant (relatively) prospects, as well. Besides her cousin and her clueless but caring mother (musician Sharon Van Etten) there doesn’t seem to be a lot of love for Autumn in the Mid-American strip mall of a town. When she goes to a clinic to confirm she’s pregnant, the practitioner plays a religious right anti-abortion PSA on teen pregnancies.

Autumn’s path takes her to New York City, where a minor doesn’t need parental permission to obtain an abortion. She’s got her cousin in tow and her mother in the dark, and you fear the city will eat them up – they don’t have much money, and the only person they know is a goofball by the name of Jasper (Théodore Pellerin) whom they met on the bus.

The meaning of the film’s wordy title: possible responses to a questionnaire at a clinic that give us insight into Autumn’s past. Hittman’s style here is so on-the-street and in-real-time, the film feels like a documentary, which gives “Never Rarely Sometimes Always“ a gritty, honest edge deepened by chemistry forged between Flanigan and Ryder (who will be in the upcoming Steven Spielberg “West Side Story” production) and their immersion into their respective characters. The unspoken bond of sisterhood and the weight of the world Autumn seems to bear go far behind the topographical anxiety in Bo Burnham’s satirically sharp “Eighth Grade” (2018).

Also this week I reviewed “The Other Lamb,” a curio about a cult of women led by an enigmatic Jesus figure. In that film, a young woman by the name of Selah (Raffey Cassidy) struggles with matters of sexuality and fertility under male-held reins. In countenance, and the intense pondering in her eyes, she’s Autumn’s kindred – trying to comply while trying to break out, fighting for her identify as she blossoms into womanhood.

Available on iTunes, Amazon and other platforms where movies can be rented individually for streaming and on demand.